Our latest Regional Update looks at a three-year Barley Grass Project which is an investment by GRDC being delivered by the University of Adelaide and DPIRD alongside regional partners.

Western Australia Department of Primary Industries and Regional Development research officer Catherine Borger and project participant, Ben Whisson from Consult Ag (pictured above) have some interesting preliminary results to share with us. 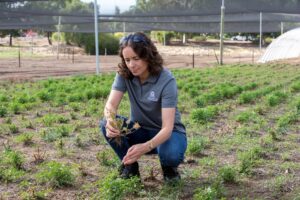 Learn more about the project described in the podcast here.

Barley grass has become a critical ‘driver’ weed in several grain growing districts under no-till systems and in some areas such as Upper Eyre Peninsula, with barley grass also having a big influence on the cropping system.

Using the RIM approach to testing the best IWM strategies has been valuable for ryegrass management over a long period, so it was an obvious step to provide agronomists, farmers and researchers with a RIM tool for these other major grass weeds.

You can access the Barley Grass RIM tool here. You can learn more about both the Barley and Brome modelling tools here as well.