Andrew and Jocie Bate are well-known as the founders of SwarmFarm Robotics, but it is their 4000 ha cropping operation, ‘Bendee’ at Gindie, south of Emerald, that is the inspiration behind their agtech venture.

The idea of small, lightweight machines replacing heavy tractors was prompted by Andrew’s determination to alleviate soil compaction on the 50 to 150 cm deep black cracking clays at Bendee. Ninety per cent of the area is sown to winter crops, which are grown primarily on soil moisture stored over the previous summer. 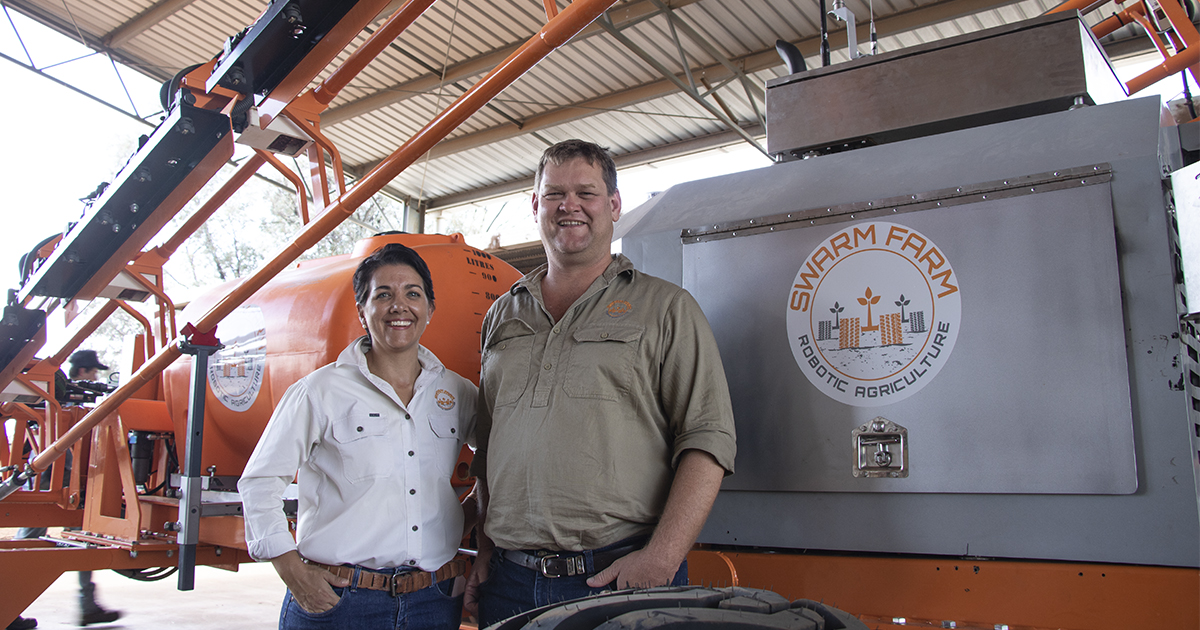 Andrew and Jocie Bate, farmers first and foremost. A desire to alleviate compaction on their farm at Gindi, Central Queensland is the driving force behind their agtech venture into robotics.

“Central Queensland winters are generally dry and we rely on moisture stored during summer storms and retained through zero tillage and stubble cover,” says Andrew. “Wheat provides the best stubble and chickpea is our most profitable crop so we just rotate between these two crops. About one year in five we will have the opportunity to plant a summer crop and we’ll double crop a small area to mungbeans or possibly forage sorghum or dryland cotton.”

The Bates also run a cattle enterprise separate from their cropping, except for limited grazing of forage sorghum one in three years in just one paddock. They usually avoid having the cattle on the cropping paddocks due to the compaction and the proliferation of hard to control weeds that can occur.

Deep, or moisture-seeking, planting has been a valuable tactic for the Bates, particularly in chickpea crops. In years where there is no summer crop in the ground they are able to plant as early as April, without waiting for planting rain.

“We plant chickpea seed up to 25 cm deep into moist soil,” says Andrew. “Wheat is more difficult to establish this way but varieties like Mitch that have a strong coleoptile can be planted up to 13 cm deep into moisture. It is still hot here in April and the temperature can reduce coleoptile length, so planter setup is critical to get even emergence from depth. If we can achieve a good even stand, the crops have access to good moisture to sustain vigorous early growth.”

Mitch is not a prime hard wheat variety so Andrew only grows it when soil moisture is limiting, knowing that it will push out of the ground even in tough conditions. Wheat stubble is essential for their farming system, so Andrew does everything necessary to ensure a good wheat crop is established.

The deep sowing technique has proven almost bullet-proof over the last 20 years with wheat being reliably established in eight years out of ten, and they have had 100 per cent success with chickpeas. In most years Andrew grows their crops on stored moisture plus one inch of early rainfall and hopes for one follow-up rainfall event in-crop.
In-crop weed control
“We put a lot of emphasis on having clean fallows and achieving strong emergence of the crop,” says Andrew. “This is critical to maintaining our low weed numbers in our winter crops. All our crops are sown on 50 cm row spacing, except sorghum, which is sown in meter rows. In the recent dry summers, we have opted to grow forage sorghum rather than grain sorghum as a risk management strategy due to limited stored moisture in the profile.”

Metsulfuron-methyl (e.g. Ally, Group B) and Tordon 242 (Group I) herbicides are providing reliable in-crop control of broadleaf weeds in wheat crops and has a useful level of soil residual activity that reduces the incidence of weeds germinating late in the season. Andrew says the dry conditions in Central Queensland winters results in minimal in-crop weeds, so there is little pressure to adopt harvest weed seed control tactics – their focus is on controlling summer fallow weeds.

Wheat provides the essential stubble cover to maximise soil moisture conservation over summer to underpin the following, and most profitable, chickpea crop.

In the chickpea and mungbean crops Andrew uses Group A chemistry, mainly haloxyfop (e.g. Verdict), to manage grass weeds. While he avoids residuals as much as possible to maintain flexibility in the rotation, he uses simazine (Group C) across all of his chickpea and isoxaflutole (Group H, e.g. Balance) on about a quarter of the chickpea area to provide long-term residual control of many problem grass and broadleaf weeds, including glyphosate tolerant feathertop Rhodes grass, sowthistle, and fleabane in crop and during the following summer fallow.

“We use minimal in-crop herbicide and rotate between chemical groups though the crop rotation,” says Andrew. “But really we rely mainly on our fallow management to have clean paddocks to plant into.”
Within the next few years all the weed control and planting at Bendee will be done by the robots. Andrew and Jocie will soon dispense with their self-propelled spray unit and just use their robots supplemented with blanket aircraft applications on less than 10 per cent of the farm area. The weediest paddocks on Bendee still only require herbicide to be applied to 20 per cent or less of the area. The robots can also do broadacre spraying but this will be more practical once the docking and refilling capability is implemented.

“We generally have dry harvest conditions so most of the soil compaction is done by the sprayer in wet conditions,” says Andrew. “Right from the start this has been a driving force behind the development of the SwarmBot concept.”

There are currently two SwarmBot-5 robots with WEEDit attachments working on Bendee. The two robots cover 24 ha/hr and can work 24 hours a day if conditions permit. With weather stations now onboard, the robots will drop into sleep mode when the weather conditions are outside acceptable parameters and then wake up and resume work when the conditions are good.

Robots and the optical WEEDit sprayer have combined to reinvent the fallow weed management system at Bendee Farming. With more passes, there are more opportunities to spray weeds when they are small and easy to kill, and rotate chemical groups more often.

Summer weeds are of greatest concern at ‘Bendee’, with sowthistle, fleabane, wild sunflower and feathertop Rhodes grass being the main targets for fallow weed management. These key species are a bigger problem in years with wet summers, where the weeds can get away during the fallow period and then haunt you in the following crop. Andrew is working on setting up the robots to wick-wipe weeds such as milk thistle growing above the canopy in chickpea and stop seed set.

Robots and the optical WEEDit sprayer have combined to reinvent the fallow weed management system at Bendee Farming. While Andrew acknowledges that calendar spraying is generally a bad idea with regular spray rigs, it is a really valuable tactic when you have robots at your disposal.

“We are doing more frequent passes with the robots applying knockdown herbicides and it works well because we are always spraying fresh, small weeds and minimising seed set, therefore reducing the risk of herbicide resistance,” he says. “We are also better able to control weeds that are considered hard to kill with glyphosate, such as wild sunflower, feathertop Rhodes, sowthistle and fleabane, which are all much more susceptible to glyphosate when they are very small.”

“With robots, it’s not about how many acres you can spray in one day – it’s more about how many passes you can do in one season. More passes, gives you more opportunities to kill weeds when they are small and easy to kill and rotate chemical groups more often.”

The benefit of the robot and optical sprayer combination is that both operate equally well at night as in the day, and so can be out spraying whenever the conditions are within the optimal range of temperature, wind speed and humidity.

Andrew can also use a wider range of knockdown options such as glyphosate (Group M), paraquat (Group L), glufosinate-ammonium (Group N), and proprietary mixes such as amitrole (Group Q) plus paraquat when spot spraying to reduce costs.

“Running the robots weekly to hit weeds hard opens up untapped potential in existing herbicides because they are being spot sprayed on small weeds only,” he says. “This avoids the need for residuals in fallow and there’s even the option to add spot cultivation if required.”

“With robots you can spot spray a paddock that an agronomist would say was not worth spraying. Having a low weed seed bank means there is less pressure to go spraying straight after rain because there will be fewer weeds germinating.”

With 4000 ha of summer fallow to keep clean Andrew is also re-evaluating their double-knock strategies using the robots. He is finding that the proprietary mix Alliance (Group Q + L) is a good double knock for glyphosate and he often puts two compatible modes of action in the same tank mix.

“The WEEDit makes double-knocking much more practical, and using the robots means the workforce and family have less exposure to chemical,” says Andrew. “We can afford to double-knock more often.”

Where weedy patches have established Andrew employs patch management strategies to prevent seed set. Intensive herbicide treatments or use of the robotic cultivator are now options at Bendee, particularly if the weed escapes are large plants.

“Ideally we are working toward the development of microwave technology for the robots rather than targeted tillage,” says Andrew. “Microwave weeding is only practical on a robotic platform and when applied using weed detection there is a big reduction in the energy required. For us, the key advantage is the zero soil disturbance – a lot of weeds thrive in a disturbed or cultivated environment even if the disturbed area is small.”

Andrew and Jocie see microwave technology as a good non-herbicide option that is compatible with robots and no-till farming systems. This prototype is proof of concept.

“Buffel grass provides good competition for weeds along fences,” he says. “It is very important to just use broadleaf selectives and preserve the buffel, otherwise you end up with all sorts of weeds.”
Robotic planting
The Bates have built a planter that the SwarmBot can tow and in time they expect to have the robots completing the whole planting operation. Previously the SP sprayer was used to apply the blanket spray in front of the tractor with the planter but now the two robots can follow each other, one applying the blanket spray and one towing the planter, with both operating at 10 km/hr.

The controlled traffic system at Bendee is based on a 12 m header front, spraying band of 12 m and the 6 m robot planter will make extra wheel tracks but apply far less weight to the paddock than the conventional planter that has wheels every 4 m, with each wheel applying more weight than a whole robot.

Harvest time is an important opportunity to assess weed burden across the farm and be proactive about driving down the weed seed bank. Read More...