In 1980 the Bach family of Toowoomba diversified their farming operation to include a commercial grain storage and handling facility. With a background in grain production the family knows what’s needed to provide an efficient and safe grain handling service for other farmers.

Not only do they know the importance of cleaning and grading grain to bring it ‘up to spec’, they also understand the value of removing weed contamination from seed that is being retained for planting, removing extraneous matter that can lead to problems in long-term storage and selecting the largest seed with the highest germination percentage and early vigour. 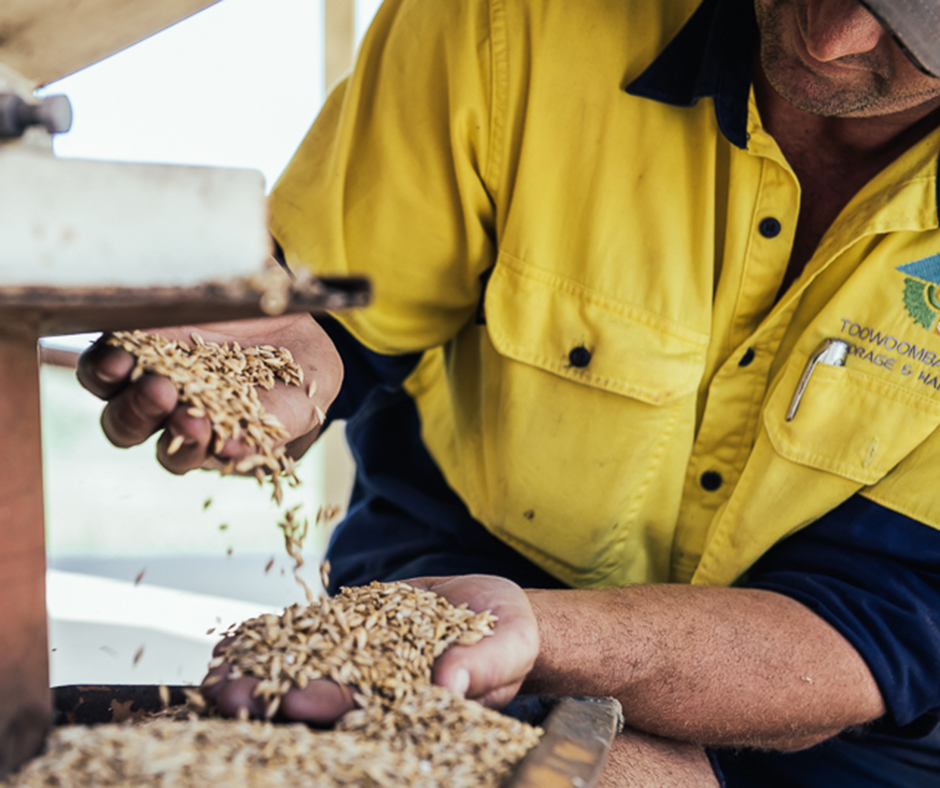 David Bach from Toowoomba Grain and Storage suggests harvesting much more grain than you need for seed, getting it cleaned and keeping the largest grain aside for seed.

David Bach manages the family’s grain handling facility near Toowoomba, on Queensland’s Darling Downs. He says that since retained seed must be stored for longer than most grain is held on-farm, it must be stored in optimal conditions. “Grading grain at harvest will remove trash such as leaf and stem material that can attract insects and mould while the grain is in storage, either awaiting sale or being retained for seed,” he says. “Once cleaned the seed then needs to be kept cool and dry to maintain seed quality.”

“When planning to retain seed on-farm, select the best part of the paddock and harvest it first,” says David. “This way you will have collected the seed with the greatest vigour, which will provide the most competition for weeds in the early growth phase.”

If there is not an area of the paddock that is clearly better than the rest, David suggests harvesting much more grain than you need for seed, getting it cleaned and keeping the largest grain aside for seed.

“Grading it hard means that you have the best chance to remove a large proportion of the weed seeds present and you will also have a more consistent line of seed with the highest germination percentage,” he says.

“It is very important that grain is cleaned at harvest, before it is stored. Clean seed that is stored and managed properly can remain viable for over 9 years.”

They noticed an increasing problem with herbicide resistant crops growing as volunteers in other crops and contaminating that grain. “For example, imi-tolerant sorghum might grow as a volunteer in another, conventional crop, and will not be controlled by the herbicides applied in that crop,” says Peter. “Further cross contamination can occur if that seed is unintentionally kept for planting. It is easy to become complacent about the herbicide tolerant crop plants growing on roadsides and the potential flow of seed from roadsides into grain paddocks.”

Using the stripper front and chaff deck combination in their cereal crops has gone a long way toward solving their problems with volunteer crop plants from previous seasons.

“The standing stubble has given us planting opportunities for summer crops that would not have been possible after a conventional harvest,” says Peter. “Barley stubble provides an excellent environment for planting mungbeans and when the mungbeans are harvested, the paddock has much better ground cover with the previously-standing cereal stubble being retained on the soil surface.”

Peter and Kylie find that the barley stubble can persist for a few seasons after the growing season, providing soil moisture conservation benefits in their summer cropping program.

Retaining seed not only represents a cost saving for them, it also provides a back-up if some or all of a paddock needs to be re-seeded for any reason.

Having a good supply of seed on hand means that growers can take advantage of favourable seasonal conditions. “We try to store enough seed here to plant half of the farm’s cropping area as soon as the soil moisture conditions allow,” says David. “This way we can make last-minute decisions and be confident that the seed we plant is clean and good quality.”

“Especially when the price is up it can be difficult to source seed, so we clean five times as much seed as we expect to use and store it,” he says. “To get that seed we might clean 120 tonne of grain and just keep the best 10 tonne for seed knowing that it has been thoroughly cleaned and graded.”

David cites black oats as the main problem in their area for barley and wheat crops, and sees that the wild turnip is soon going to be a major concern for growers.

“It pays to clean mungbean seed very hard,” he says. “Just one tonne of seed is required to sow 40 ha so it makes sense for that tonne of seed to be the very best that you have available, and free of weed seed contamination.”

Johnstone grass is the most difficult weed to remove from sorghum and maize crops in summer and David sees the herbicide tolerant hybrids providing some useful options for grass control in these summer crops.

There are several types of grain cleaning equipment available that vary in their efficiency when it comes to weed seed removal.

The Bachs use a rotary screen machine that has two main sections—1. an aspirator, where a fan sucks air through the grain, removing fine particles such as dust, and light material such as husks and some weed seeds and 2. the screens, where the grain rolls around inside a drum with different sized screens that allow the grain to be separated according to size.

“Usually the grain is sorted into two sizes plus the gradings or screenings, where the vast majority of weed seed is collected,” says David.

“Improving the grade of the sample is usually fairly simple, but cleaning for seed is much more time consuming and therefore costs more.”

“Sometimes growers think that their grain is cleaner than it really is,” says David. “On farms where the spraying is contracted out the farmer may not be as aware of the weed populations around their property.”

David says the value of having a commercial grain handling contractor do the seed cleaning lies in the contractor’s knowledge about how to set the machine up to achieve the best result. “The screens are expensive but it pays to use the right combination of screens to suit the grain and the weed spectrum,” he says. “It is probably not economic for a grower to invest in the large number of screens required to do the best job in all situations.”

“Grading table gear does an excellent job to remove weed seeds too,” says David. “These machines are most commonly found at commercial grain packing and processing facilities and could be a viable option for growers to use in some situations.”

Research conducted in Western Australia confirms David’s comments about the value of having seed cleaned by a specialist rather than using equipment, such as sieves or in-field rotary screens, that some growers use to clean their seed on farm.

Growing seed for future planting needs to be a planned operation—start with clean seed, sow into a clean paddock, grow a competitive crop that suppresses weeds, keep the crop weed-free by taking action if individual plants survive treatment, harvest the best, cleanest part of the paddock, clean the seed hard and store it under optimal conditions. “Seed is very valuable and is worth investing in,” says David. “If you plant clean seed into clean paddocks the cost savings in time and herbicide will soon pay for the cleaning of the seed.”

To determine how many weed seeds are present in a potential seed lot, collect a 1 kg sample and separate the crop seed from all other material. 100 weed seeds per kilo of cereal or pulse seed sampled equals around one weed per square metre when the crop is sown.

For more information try these links