Glenn Coughran, Beefwood Farms’ manager, has used optical sprayers as the foundation of a rejuvenated weed control program over the last 14 years and seen the benefits of combining this technology with autonomous tractors over the last five years.

The combination allowed for more efficient and targeted use of herbicides through double knocking and more timely and frequent applications to treat weeds at their most susceptible growth phase.

With low weed density across the 11,000 ha operation Glenn is able to avoid the use of pre-emergent herbicides, which have limited crop rotation choices in the past, particularly in years where summer rainfall has been low. Glenn is keen to see ‘green-on-green’ optical weed detection become a reality and is working closely with AgriFac to have this technology integrated into their spraying equipment.

Located between Goondiwindi and Moree on the western side of Newell Highway, Beefwood Farms is an aggregation of six neighbouring properties, all operated from the central workshop area. Gerrit and Pam Kurstjens, originally from Grubbenvorst, the Netherlands, purchased the aggregation in 2006 and began the transition from livestock to a controlled traffic continuous cropping operation using the latest technologies to achieve greater efficiencies.

“Our cropping program has to respond to the weather, and to a lesser extent prices, but normally the sequence is wheat then barley then chickpea or left out for winter and into sorghum in summer,” says Glenn. “We are keen to try dryland cotton but unless we have conditions that result in a full profile of soil moisture it just isn’t a feasible option.”

“Each year we fallow about 20 to 25 per cent of the farm in winter in preparation for planting the summer crop,” he says. “If the sorghum is off soon enough these paddocks are usually double cropped back to chickpea the next winter. This tactic gives us two consecutive winters to work on any winter grass weeds, particularly wild oats, using different chemistry.”

But with a string of very dry years recently the opportunities to grow summer crops has been limited.

They generally avoid using residual chemistry in summer due to concerns over the possibility of insufficient late summer rainfall to breakdown the chemical prior to planting the winter crop.

“We have been caught using imazapic in a summer fallow and then we didn’t get the necessary 150 to 200 mm of rainfall needed to break down the residual,” he says. “This meant we had to grow Clearfield barley, which was a good option in the circumstances, but you are restricted to just a few varieties and we don’t want to be limited in our crop choices too often.”

In drier years Glenn will often increase the area sown to barley as it has a greater competitive ability and tends to perform better under marginal soil moisture conditions than wheat.

Beefwood Farms’ consulting agronomist is Stuart Thorn, a director of MCA Ag, Goondiwindi. Stuart oversees the herbicide program for the operation, including recommendations for herbicide mixes and rotation of herbicide modes of action.

“Bringing in new country into our cropping program usually involves tackling large weed populations such as a recent acquisition where barnyard grass was a big problem and we used residuals to help regain control,” says Glenn. “Residuals have also helped with feathertop Rhodes grass, and then we backed away once the problem was under control, which usually only takes a few years.”

In the fallow Glenn uses a double knock of glyphosate applied as a blanket spray and then followed up with paraquat to treat any survivors using the optical sprayer. They also use glyphosate at robust rates through the spot sprayer and no longer mix glyphosate and 2,4-D.

To stop weed seed set in-crop Glenn will often implement a late spray of a Group Z grass selective herbicide, flamprop-m-methyl, to patch out weedy areas of wild oats in wheat. Chickpeas are always desiccated to prepare the crop for harvest and this can have some weed control benefit going into the fallow.

Picloram applied in cereals to control broadleaf weeds such as sowthistle also provides a residual effect to reduce fleabane germination in July/August.

“Maintaining stubble and ground cover is our number one priority so there is no cultivation for weed control or any other purpose,” says Glenn. “Our best chance to grow competitive crops is to have stored soil moisture.”

At this stage Glenn has not implemented any harvest weed seed control measures at Beefwood but he is keeping an eye on developments. Due to the loss of stubble involved, they will not adopt narrow windrow burning but other tactics that maintain and spread stubble cover would be considered if the need arose.

Automation for spot spraying works well – but is now on hold

Having already seen the chemical savings and the weed control benefits of using optical spraying technologies for over 10 years, Gerrit and Glenn were looking for ways to extend the value of the technology to achieve even greater efficiency with chemical use, particularly in fallows.

“Gerrit has contacts with the Dutch company, Precision Makers, who had developed software for autonomous lawn mowers, and in about six months they had made the necessary modifications and installed the software on a Fendt 936 Vario tractor that we had on the farm,” says Glenn. “We found the autonomous tractor paired with the optical sprayer was a perfect fit, allowing us to spray 24 hours a day if conditions are right and to spray on the weekends without adding to our labour costs.”

After a few years they purchased a John Deere 8345 tractor, also fitted with Precision Maker equipment.

Over the last 10 years the optical spray operations have applied herbicide to an average 2 to 8 per cent of the field area, using robust rates, but this is still far more economical than blanket sprays. 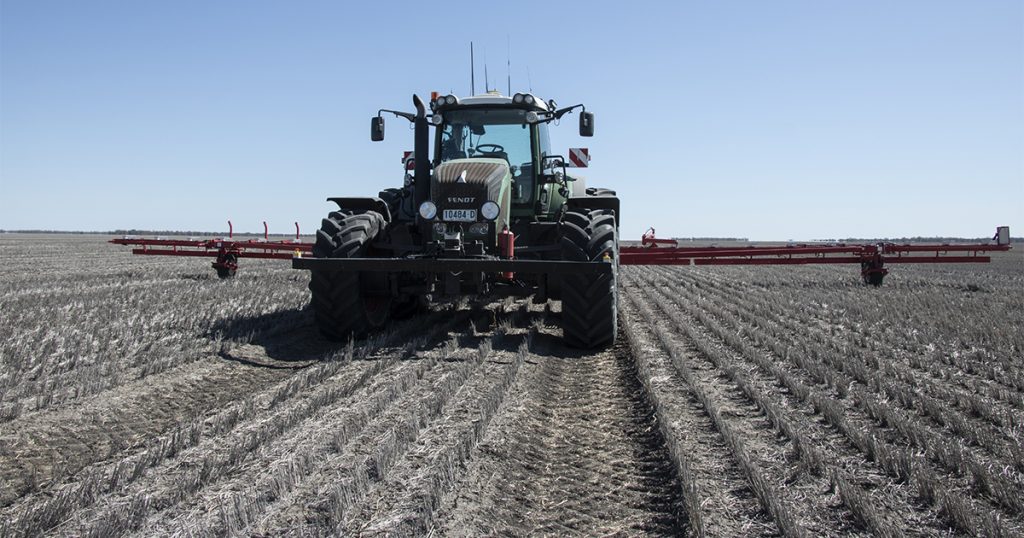 “We know it works very well when weed density is low. Now we can use the autonomous tractor to spray more frequently than you would with a driver, we have started pushing the boundaries and using the optical sprayer in paddocks with weed density of 30 per cent, knowing that we can keep coming back,” says Glenn. “Even at a higher herbicide rate this is cheaper than a blanket spray operation. The more often we go back the less large weeds there are and we are spraying smaller weeds that are easier to kill.”

In a recent spray job on 3500 ha of fallow the optical sprayer activated spray nozzles on just 0.7 per cent of the area, at a cost of 24c per ha for chemical, without a driver.

Every three years, usually following chickpeas when there is less crop residue, the tractor operates a TPOS flat track renovator along the 2 to 6 km long CTF wheeltracks – saving someone from a very boring job.

Having proven the value of automation to the farming system at Beefwood Farms, they have been forced to put their work in this area on hold after John Deere bought out the automated machinery component of Precision Makers in 2019 and have decided to concentrate on automated mowers for the turf industry. They are currently not servicing the automation software that Beefwood Farms had installed in two tractors.

“Unfortunately, until we find a suitable alternative, we have had to go back to fully conventional operations for spraying,” says Glenn. “It is hard to accept when we have seen the benefits of automation for these routine operations.”

A few years ago, Beefwood Farms bought a 48 m AgriFac self-propelled sprayer to increase their spraying capacity for blanket sprays and fallow spot spraying. The AgriFac sprayer is twice as wide at the WEEDit boom and can travel at twice the speed of the autonomous tractor, so even though there is a driver they are covering three to four times the area.

Beefwood Farms is also on the cutting edge of the latest innovation in weed detection and herbicide application, working with AgriFac and Bilberry in the testing of green-on-green spraying.

Since purchasing the AgriFac SP sprayer they have been keenly observing the advances in the artificial intelligence, or machine learning, and assisting with the field testing.

Beefwood Farms is working closely with Agrifac and Bilberry to bring green-on-green weed detection and spraying to reality.

To work in-crop the software on the sprayer needs to interpret the images from the camera, distinguish a weed from surrounding crop plants and then identify the species and size of weed. Within moments the sprayer needs to respond and deliver the correct herbicide at the right rate to the identified weed.

“The expectation is that the sprayer will be able to treat a ‘site’ of 30 cm square with exactly the right product at the right rate,” says Glenn. “This is really exciting technology and once it is fully developed we see no reason why it couldn’t be used autonomously.”