Crop competition is an important strategy in the Weedsmart Big 6 to manage herbicide resistance – but it’s not all about row width and seeding rate – the size of the seed sown makes a difference too.

This article was first published in April 2017. Rohan Brill is now an independent research agronomist at Brill Ag.

Rohan Brill, Research and Development agronomist, NSW DPI based in Wagga Wagga, along with colleagues at Trangie and Tamworth, has been teasing apart whether the improved early performance of canola hybrids over open-pollinated (OP) cultivars comes from the generally-larger seed size of hybrids or from hybrid vigour. 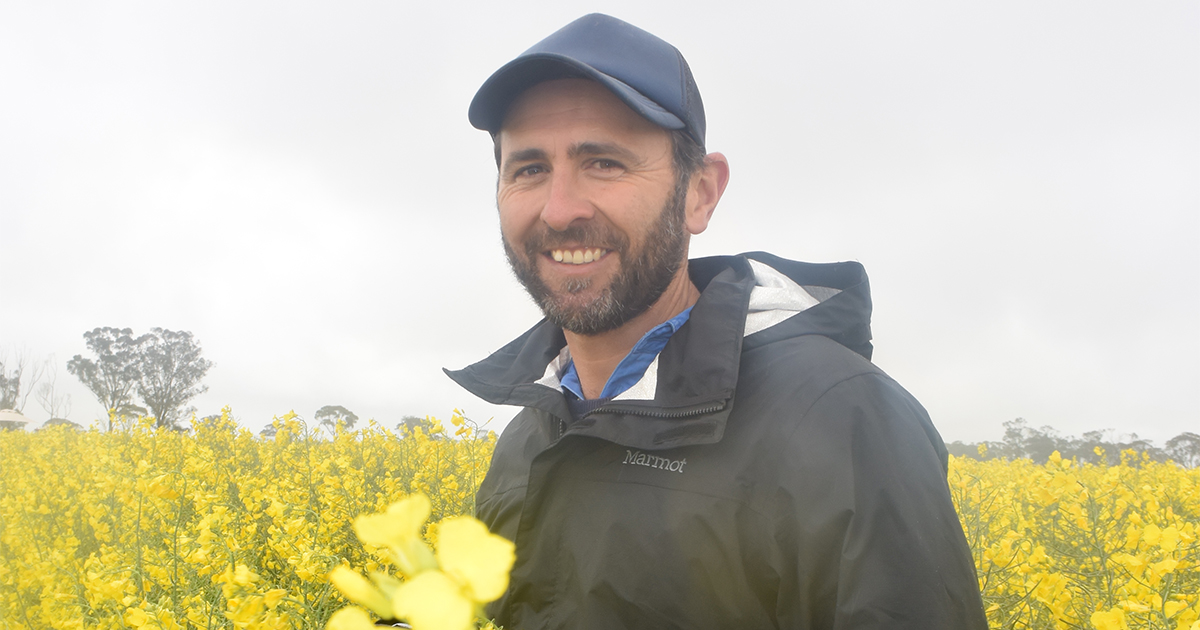 Rohan Brill, Research and Development agronomist, NSW DPI based in Wagga Wagga, says most of the improved early growth in canola hybrids lies in the larger seed size, with heterosis providing an additional benefit. Sowing large canola seed, regardless of the cultivar, is key to strong early crop growth and the crop’s ability to compete with weeds. (Photo: Gregor Heard)

“It seems that most of the improved early growth in hybrids lies in the larger seed size, with heterosis providing an additional benefit,” he says. “Our study showed that sowing large canola seed, regardless of the cultivar, is key to strong early crop growth and the crop’s ability to compete with weeds.”

As a reliable rule of thumb, Mr Brill recommends cleaning and grading all farmer-retained OP canola seed to collect planting seed that is 2 mm in diameter or larger. In both glasshouse and field experiments following this rule led to improved open-pollinated TT canola emergence and early biomass production. Seed size had a greater effect on early biomass production than did cultivar type (hybrid vs OP).

“This trial has shown that grading planting seed to extract the largest seeds is a far better way to increase crop competition and yield than increasing the seeding rate of smaller seed,” he says. “For example, a grower might take 30 tonne of grain from a clean paddock and screen it hard at harvest to take out 2 tonne of the best seed and sell the rest. Then store the 2 tonne of seed in a cool place before grading it (including using a gravity table) to 2 mm and above prior to planting. With the larger but still relatively cheap seed, a sowing rate of at least 3 kg/ha is recommended, resulting in a plant stand of 30 plants/m2 even at an establishment rate of 50 per cent. There is little penalty from sowing at even higher sowing rates, as DAFWA research found that too few plants has a greater economic penalty than too many plants.”

The DAFWA canola seed size ready-reckoner is an excellent resource for growers to use and is available on the Department’s website. Simply line up retained OP canola seed along a 10 cm section of a ruler and count the number of seeds. To achieve best results there should be 50 seeds or less to take up the 10 cm length. Use this information to calculate seed rate.

“Sowing larger seed is essential if planting early, in early-mid April rather than mid-May, to maximise grain yield potential in canola,” he says. “The larger seed can be safely sown slightly deeper than optimal for each soil type and still achieve reliable crop establishment.”

Sowing in early-mid April into residual soil moisture gives the crop a head-start on weed germinations and the strong crop growth provides valuable support for the pre-emergent herbicides. The only catch is to make sure that the cultivar selected for sowing early will flower in the optimal window for your district.

Larger seeds possess more energy resources than smaller seeds, enabling the seedling to push through more soil and stubble and to grow past insect damage and outcompete weeds. While planting larger OP cultivar seed will help close the gap in early vigour between OP and hybrid cultivars, the herbicide tolerant traits of hybrids continue to provide other benefits.

Mr Brill says the extra effort to grade seed to 2 mm will see an improvement in yield provided attention is also given to good soil nutrition, timing and harvester speed. “Driving the header too fast has been shown to cause large yield losses,” he says. “This represents a direct loss of income and the volunteer canola plants suck moisture from the soil, potentially compromising the early sowing opportunity for the following season.”

Crop competition is the cheapest form of weed control and it usually comes hand in hand with improved yield; a genuine win all-round.

Sown side-by-side, one hour apart, these Gem canola plots were sown at 2.6 kg/ha with 80 kg/ha MAP. The only difference is that the farmer retained seed on the left was graded to 2 mm while the plot on the right was sown with purchased seed, straight from the bag. (Photo: Warwick and Di Holding, Pontara Grain, Yerong Creek)

Sowing large canola seed, regardless of the cultivar, is key to strong early crop growth and the crop’s ability to compete with weeds....

Sowing large canola seed, regardless of the cultivar, is key to strong early crop growth and the crop’s ability to compete with weeds....