This can also be a herbicide followed by a non-herbicide tool (eg. the ‘Canola Combo’ – crop top followed by HWSC). All that really matters is any resistant survivors to the first herbicide are hit with another control measure so that the weeds don’t set seed. 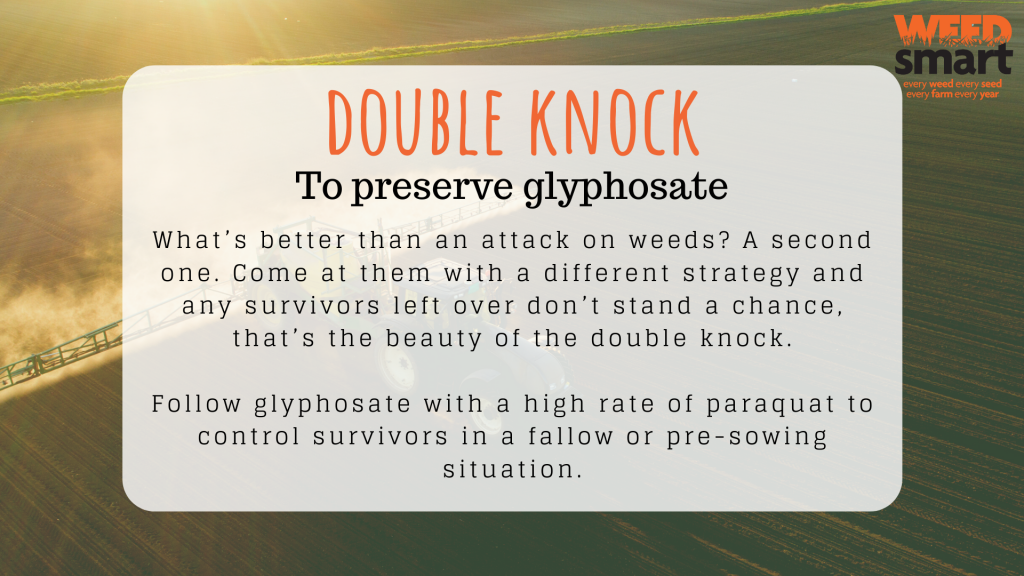 Glyphosate is the world’s most important herbicide and nothing else comes close as a low cost, reliable knockdown, so we really need to look after it.

In the fallow and / or pre-sowing apply glyphosate as the first knock, followed by a second knock with paraquat or paraquat + diquat to take out any resistant plants that have survived the glyphosate. If the main weed problem is annual ryegrass then using paraquat on its own as the second knock is an appropriate choice. If there are also broadleaf weeds present then the paraquat + diquat combination (e.g. Spray.Seed®) will be more effective overall.

A herbicide double knock is all about timing and relies on using the second knock while weeds are still small – usually one to seven days after the first knock. With a non-herbicide second knock the timing is less critical, provided surviving weeds are not permitted to set seed.

Building the double knock treatment into a whole-of-season weed management plan provides opportunities to get more ‘bang for your buck’. For example, follow a pre-sowing double knock with pre-emergent herbicides, and increase the level of crop competition with narrow row spacing, optimal sowing time and varieties with vigorous early growth.

The first knock is to kill all plants still susceptible to glyphosate—applying a lower rate risks higher survival rates, increasing the pressure on the second knock products. The second knock of Spray.Seed® or paraquat is to kill plants that survived the glyphosate. Reducing the rate of the second knock risks survival of potentially glyphosate resistant individuals and damages the integrity of the double knock tactic. Remember that paraquat and Spray.Seed® are contact herbicides and require robust water rates to ensure adequate coverage and allow for losses on stubble.

If there is a mix of weeds present it can be useful to include a compatible herbicide ‘spike’ such as 2-4D low volatile ester, carfentrazone or oxyflouren to enhance control of broadleaf weeds. Be very mindful of plant-back requirements of some herbicide ‘spikes’ before planting sensitive crops such as pulses and canola.

Optical sprayers such as Weedseeker and WEEDit are an efficient way to apply the second knock to kill any survivor weeds.

Even the highly effective double-knock tactic is at risk if growers don’t remain vigilant and ensure removal of any surviving plants. 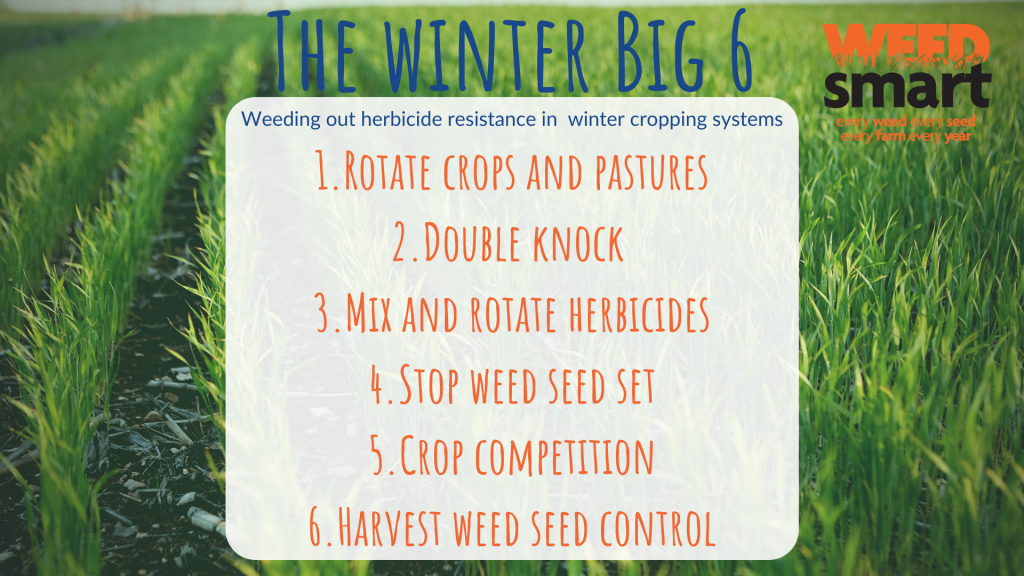