Weeds are not yield-reducing on the Jackson family farms at Gurley, in northern NSW, and that’s how they want to keep it.

Brad Jackson farms ‘Bellaree’, ‘Jymoomah’ and ‘Inverness’ with his parents Peter and Janice, and brothers Phil and Matt. The 1700 ha family operation is based on a robust winter cropping program featuring wheat, barley, chickpea, canola and linseed to help keep weed numbers low and manage risk. 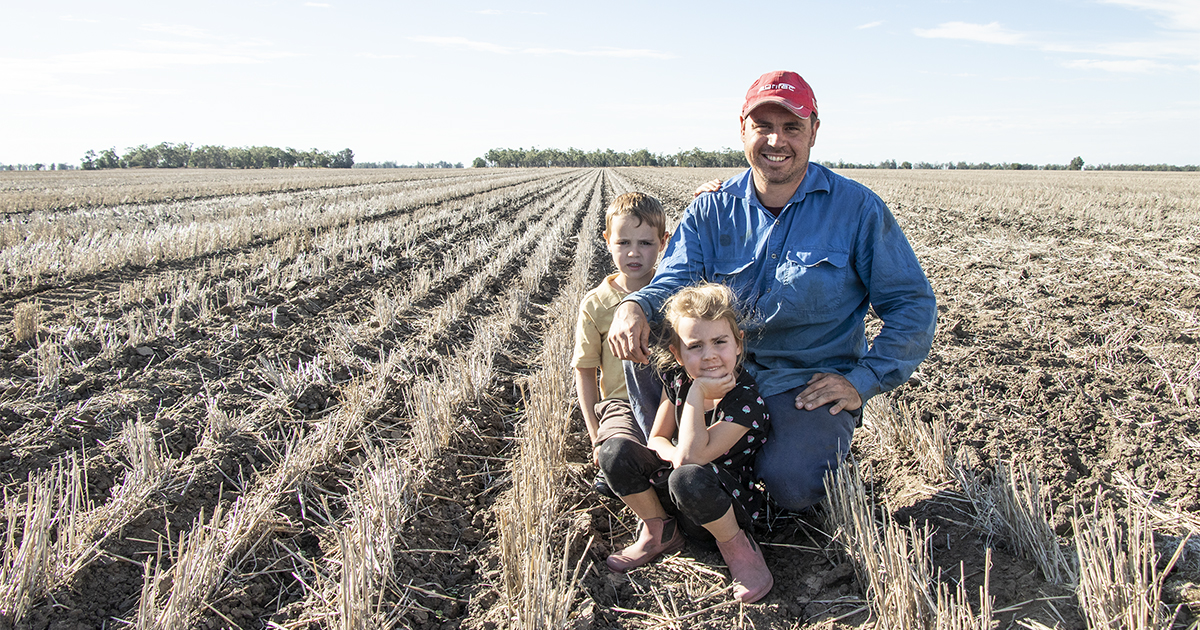 Each year there is wheat on about 30–40 per cent of the farmed area and several break crops. If weed numbers start building up in a paddock they use a canola–chickpea double break to help drive down the weed seed bank.

“We see annual ryegrass coming – it’s in the district and on our farm,” says Brad. “We know how bad it can get and how quickly herbicide resistant populations develop. We want to stay on the front foot.”

Having focussed on winter cropping in recent years the Jacksons, like most in NSW’s north, have been battling low rainfall for several seasons in a row. 2015 was the start of the long dry stretch and the challenges in 2016 were softened slightly with better results from some crops than expected, but it was also a year the family worked hard to manage expectations and take mental health seriously. 2017 and 2018 have been record dry years in the district where the Jacksons have been lucky to harvest their crops.

“We are heading into the 2019 winter with a completely dry soil profile, which is unheard of in living memory for this district. We have decided to ‘plant anyway’ and hope for the best,” says Brad. “In the end we usually end up with crops to harvest even though the yields have not been great. This year we desperately need ground cover so even if we don’t harvest grain we really need to invest in planting.” 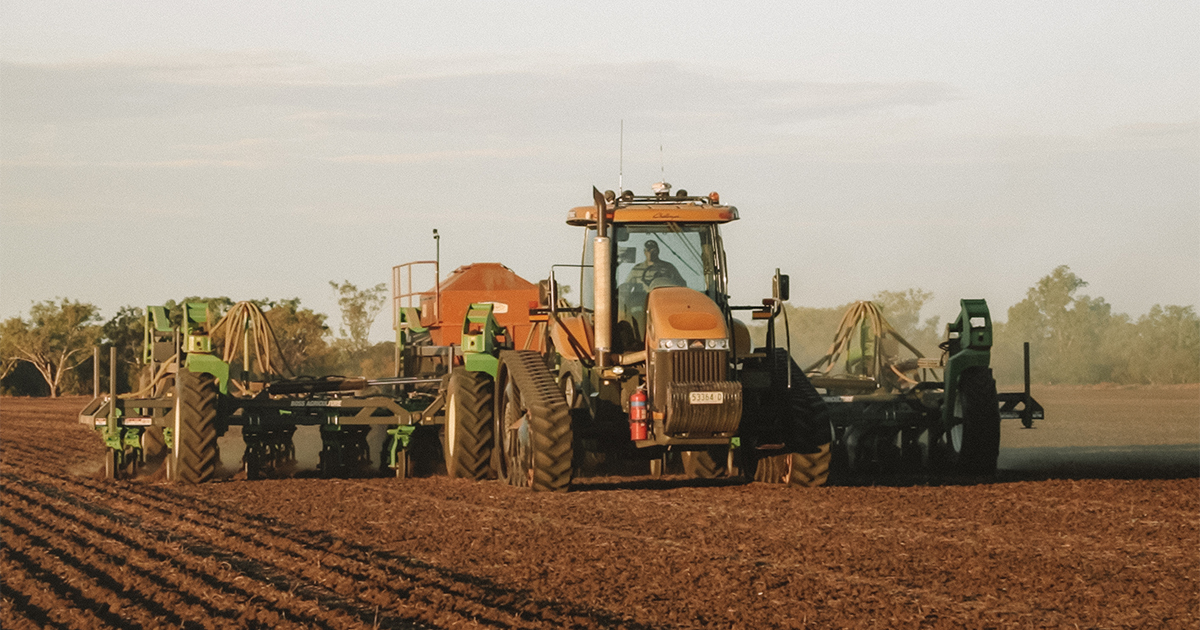 In a string of very dry years, the Jacksons have planted their winter program and ‘hoped for the best’. The Boss precision planter with coulters on a parallelogram configuration allows better trash flow and they have more control over the planting depth. Last season they were rewarded with a chickpea crop establishing well from a planting depth of 20 cm.

“The rotation that has worked well here is wheat, followed by canola, then barley, then linseed. Linseed can dry out the profile but is important in the rotation to control root-lesion nematodes,” he says. “We don’t grow any summer crops so we use multiple tactics in our winter crops to keep weed numbers low.”

The Jacksons also grow grazing oats for seed production under contract so keeping the farms as weed-free as possible is very important.

Having used a conventional tined precision planter for the last 15–20 years, the Jacksons are now using a Boss precision planter with coulters on a parallelogram configuration. They are finding the trash flow is better with the coulter and they have more control over the planting depth. Last season they were rewarded with a chickpea crop establishing well from a planting depth of 20 cm.

Brad and Peter attended the 2017 WeedSmart Week in Wagga Wagga where they were convinced of the need to reintroduce the use of pre-emergent herbicides and take every opportunity to mix and rotate herbicide modes of action.

The Jacksons also use strategic tillage, optical sprayer technology and harvest weed seed control to reduce the risk of herbicide resistance in weeds. In the last few years they have introduced desiccation in chickpeas and crop-topping in canola to control late winter grasses and early summer grasses.

In 2018 the Jacksons applied pre-emergent herbicides across 70 per cent of the farm, for the first time in 20 or 30 years. Their aim was to implement another tactic to control ryegrass, phalaris and black oats using pre-emergent applications of treflan and Avadex in linseed crops and treflan and Boxer Gold in wheat and chickpea. In the linseed and chickpeas they apply Verdict and Select in-crop. 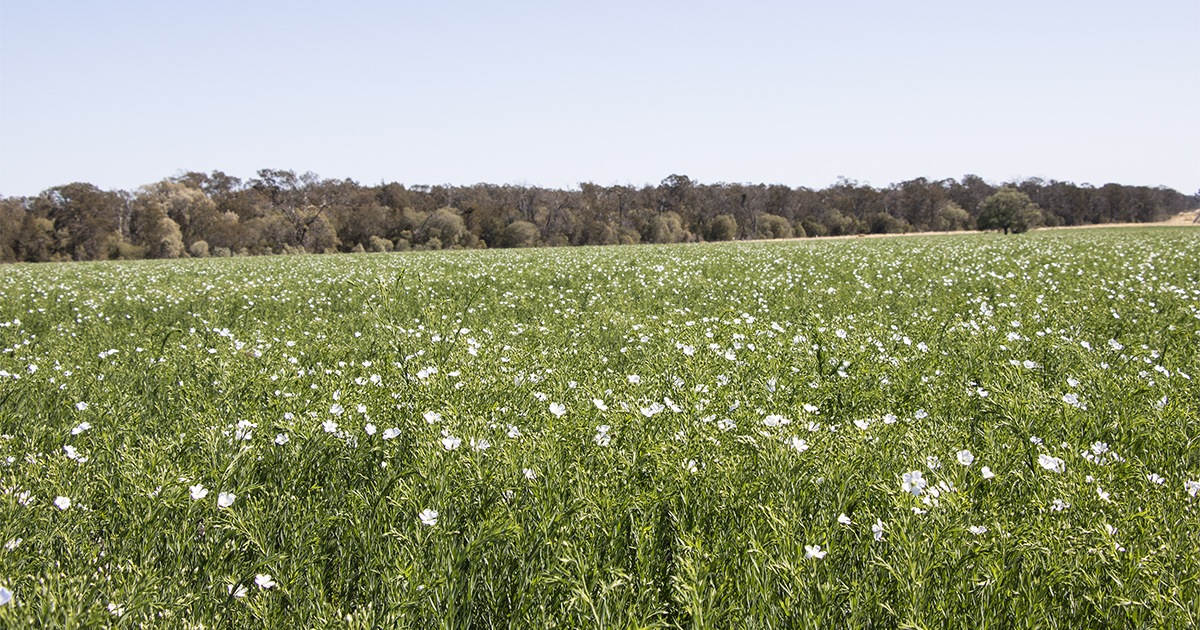 Linseed provides multiple benefits to the Jackson’s rotation. Unlike many other growers in their area the Jacksons have chosen to grow only winter crops and so need to use several tactics to ensure sustainable weed control.

The seasonal conditions did not favour high efficacy in pre-emergent chemistry but the Jacksons found that they achieved better crop establishment with the coulter than would have been possible with their old planter, providing good support for the applied herbicides.

The Jackson’s WEEDit optical sprayer has revolutionised their herbicide program, allowing them to spray low weed density paddocks more frequently and target small, fresh seedlings. They also use it to provide a second knock following a broadacre spray on paddocks with high weed numbers. They are finding this to be a great way to reduce their reliance on glyphosate and ensure this useful chemistry is still effective in the future.

“Optical sprayer units are fairly common in this district,” says Brad. “We purchased ours in 2016 mainly to manage herbicide resistance. We couldn’t really justify the investment based on herbicide savings alone.”

The WEEDit optical sprayer has widened the herbicide options available to the Jacksons in summer.

“The desiccation or crop-topping operation is the start of our summer weed control program. After rain we use the broadacre sprayer to apply glyphosate plus a Group A fallow pre-emergent and then double knock with paraquat using the WEEDit,” he says. “It is important to start early to target barnyard grass and we are able to spray more often and target small weeds every 3 to 4 weeks if necessary with the WEEDit. The main summer weeds here are feathertop Rhodes grass, barnyard grass, and button grass.”

The Jacksons expect to see a reduction in herbicide costs over time through the use of the WEEDit but at the moment they are using it to apply more expensive herbicides that would be uneconomical to apply with a broadacre sprayer to control barnyard grass.

The Jacksons started no-till in 1990, retaining stubble for improved soil moisture infiltration and retention, and to reduce erosion on their black self-mulching clays.

Although they are committed to no-till farming there is a place for strategic use of shallow cultivation with a Kelly chain. In March 2018 they used a Kelly chain on half the farm area to kill small weeds and close the cracks that were allowing the soil to dry out at depth.

“We used the Kelly chain after harvesting chickpea and then planted imi-tolerant canola 10 cm deep. The canola went on to yield 1.2–2.2 t/ha, which was a great result given the season,” says Brad.

The Jacksons started harvest weed seed control in response to the unwelcome arrival of annual ryegrass. Most years they implement narrow windrow burning on about 10 per cent of their farmed area.

“We try to burn as early as possible to get hot fires – usually in February if the season allows and it’s possible to get a permit,” says Brad. “Going early also means our Big N application program can go ahead uninterrupted from December to February without running over the windrows.”

The Jacksons use a 700 mm narrow windrow chute and select paddocks based on weed pressure and crop type. They delay harvest until crop straw is fully dry and plan ahead for an extra header if necessary to cover the area. This allows for the harvester operator to go slower and cut the crop low to make sure the maximum number of weed seed heads enter the front of the header.

“If the windrow is too big there is potential for it to be blown over. To avoid that, we turn the chopper fins backwards on our New Holland harvester to make the windrow with the chopper when necessary,” he says. “This condenses the windrow substantially, keeping it knee high rather than waist high.” 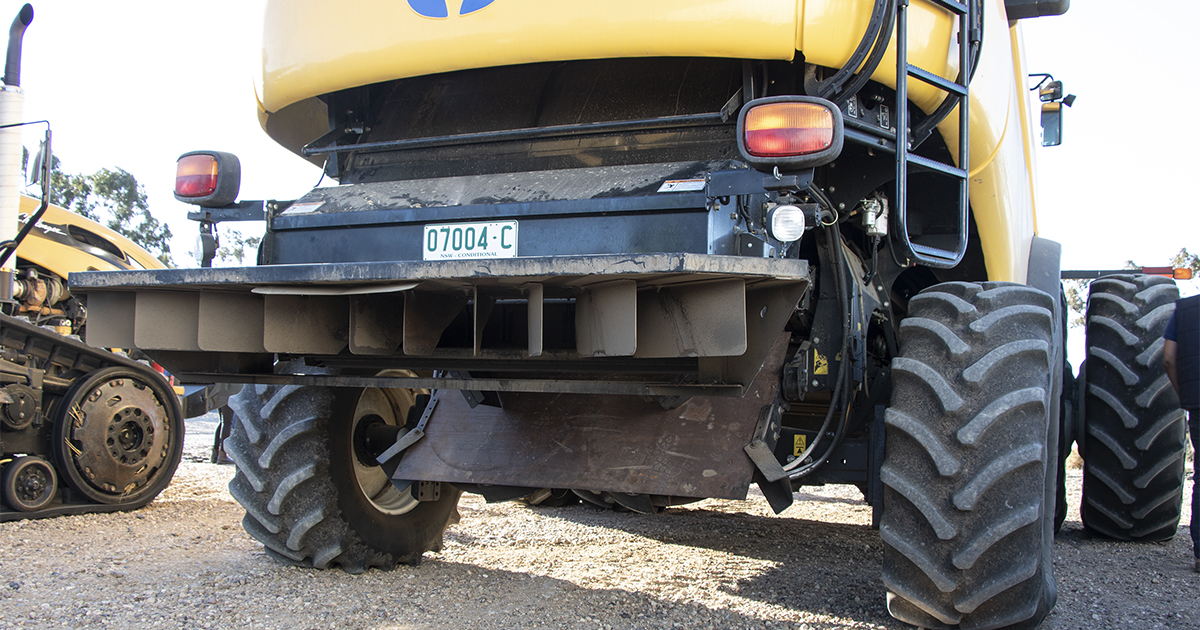 Narrow windrow burning is implemented each year on about 10 per cent of the Jackson’s cropping area. They use a 700 mm narrow windrow chute and select paddocks based on weed pressure and crop type.

Care is needed when doing this as the header can become blocked up, and air from the fan can blow some weed seed out to the side and away from the windrow.

Brad says the key is to get the weed seeds in the front of the header and then to ensure they are concentrated into a zone where they can be managed strategically.

In terms of crop choice, the Jacksons find narrow windrow burning is a good option for wheat and barley provided the stubble load is not too high. It also works well for chickpea, faba bean and linseed because of the low harvest height and lower stubble loads of these crops, however it can be hard to achieve an even flow of material into the narrow windrow. The Jacksons generally do not use narrow windrow burning in canola crops and so opt for crop-topping as their main tactic to control weeds present at harvest.

While narrow windrow burning has been an effective in containing the risk of herbicide resistant weeds, the Jacksons are keenly assessing other options such as a weed impact mill, chaff lining or tramlining to avoid the need for burning and to retain more stubble in situ.