Brothers Gary, Paul and Bronte Bruce farm at Alford on the Yorke Peninsula, SA have used harvest weed seed control as an important tool in their weed management program to bring down grass weed numbers in their continuous cropping business.

For the last 15 to 20 years the Bruce family has followed a 3-year rotation of wheat – barley – legume, having exchanged field peas for lentils in the legume phase in recent years. They found that producing export hay on grassy paddocks was a very effective way to manage grass weed seedbank, to the point where they had only one paddock of hay in 2016 and no hay in 2017. 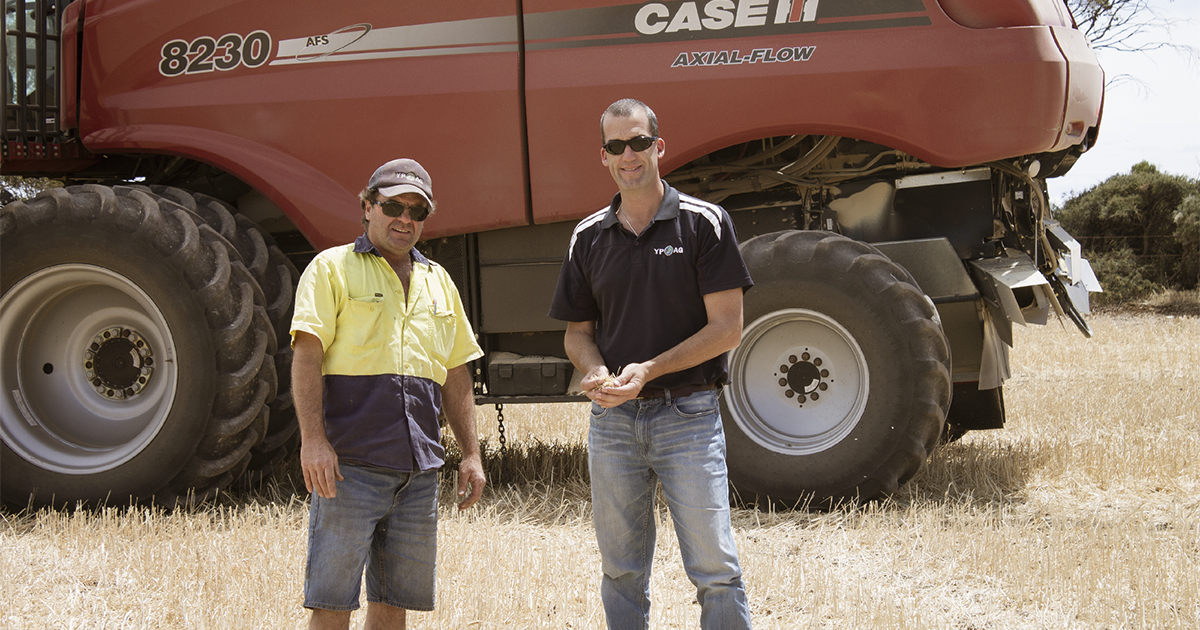 Gary Bruce, together with the family’s agronomist Chris Davey, YP-AG sets out a plan for the season, including our weed management program, with different strategies used depending on whether there is a wet or a dry start.

“Hay production is hard work and now that we don’t have much of a grass weed problem we are taking hay out of the rotation for a while,” says Gary. “The hard work was certainly worth it in terms of regaining control over herbicide-resistant weeds on the farm. Now we’d like to keep more crop residue on the paddocks to improve the hardsetting nature of the soil here.”

Having used a chaff cart for many years, the Bruce’s were well aware of the benefits of capturing weed seed in the chaff stream but Gary was very interested to hear HWSC advocate and WA grower, Ray Harrington, speak at a field day about chaff lining. In 2017 harvest they used chaff line chutes on two headers for the first time. As usual they learnt a lot in their first harvest and have plans to make even better use of the system this season.

Gary is very aware of the fact that there is very limited research on the long-term impact of chaff lining on weed management.

“Our farm is partially set up for controlled traffic with 12 m and 36 m gear so the chaff line ends up on a spray track every third run,” he says. “We found starting the harvester on a spray track at the edge makes the best use of the wheeltracks. If we go to a full CTF system we will probably change to using a chaff deck system but the chaff lining chute is certainly a cheap and effective way to confine weeds to a small area of the paddock while also retaining the stubble.”

Gary’s farm is partially set up for controlled traffic with 12 m and 36 m gear so the chaff line ends up on a spray track every third run. So far they have found using the chaff lining chute is a cheap and effective way to confine weeds to a small area of the paddock while also retaining the stubble.

Brome grass is the most problematic weed on the Bruce’s farm with limited options for control in the cereal phase. There are limited chemical control options to kill early germinating brome grass before seeding and so Gary relies on HWSC to take care of late germinating cohorts. They recognise that hay making has played an important part in keeping this weed in check and acknowledge this could be more difficult if they get out of hay production altogether.

All crops are sown to achieve greatest crop competition possible using 25 cm row spacing and cultivars that are well suited to the different soil types. Two-thirds of the farm is inter-row sown while paddocks with hardsetting topsoil generally follow the same furrow as the previous year. As the soil improves through increased residue retention Gary hopes most of the farm will eventually be sown in the inter-row.

“Early in April we usually speak with our agronomist, Chris Davey, about a plan for the season, including our weed management program,” says Gary. “For example, wet and dry starts need different strategies such as ensuring there is sufficient moisture to activate metribuzin and propyzamide before sowing lentils. We have also experienced more summer rainfall recently and often need to do two sprays for summer weed control.”