Farmers have been reporting that several weed species seem to be emerging later than usual, evading pre-emergent herbicides, to establish in-crop.

This apparent shift in emergence has also caused weeds researchers some trouble when they conduct herbicide resistance testing and find that seed from some populations has greater germination than others.

Hanwen Wu, NSW DPI principal research scientist says he first came across this with fleabane when seeds collected from some populations failed to germinate. He began to investigate whether herbicides applied to the weed populations over summer could have been affecting seed dormancy and viability.

“Herbicide-induced dormancy could be a problem for growers as it can cause delayed emergence and prolonged seed persistence in the field. Weeds like fleabane that are difficult to kill, especially once they have developed a strong root system, can quickly take advantage of summer rainfall to send out multiple branches bearing large amounts of seed.”

“Our field and glasshouse trials have shown that there are herbicides that can be used to reduce the amount of viable seed produced by large fleabane plants, but the timing must be right,” he says. 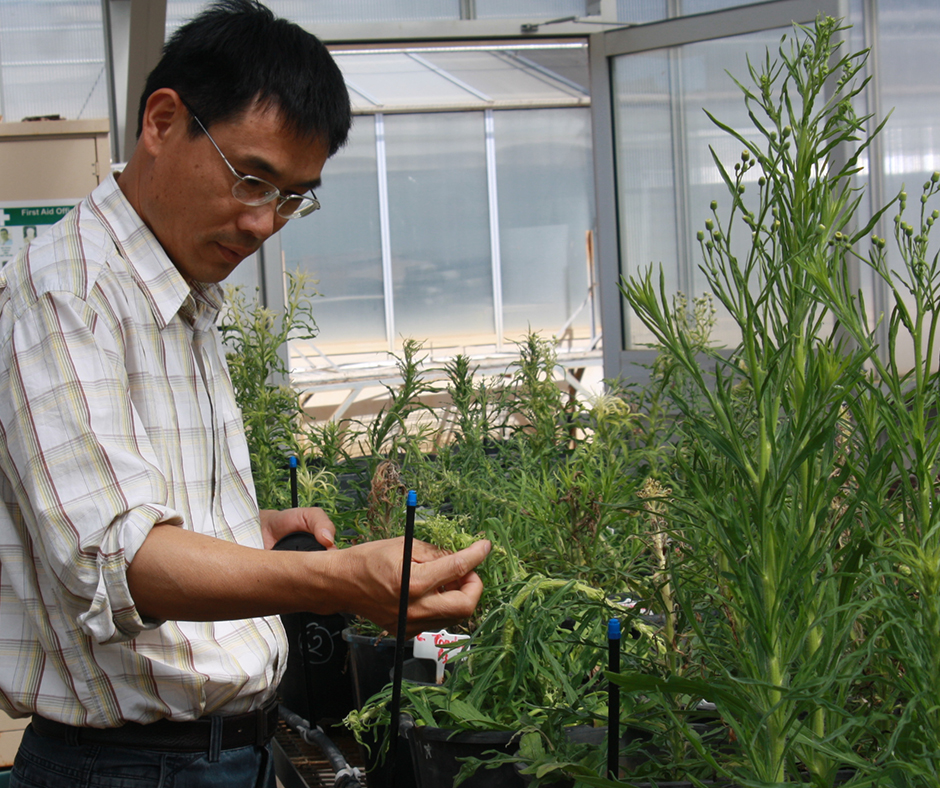 How important is the timing of herbicide application to sterilise fleabane seed?

Longer answer: There is only a 3-week window between early budding and late budding when the fleabane buds begin to open. Spraying glyphosate at late budding or at flowering is generally wasted and is more likely to help the plants produce seed with longer dormancy. Spraying at early budding can effectively kill or stunt the seed heads and more seed will be sterile.

What herbicides are effective for this use?

Short answer: A range of herbicides commonly-used in summer can effectively reduce the germinable seeds and the total viable seeds on flaxleaf fleabane plants, especially when applied at the early budding stage. Delayed herbicide application has a lesser sterilising effect on the seed.

Longer answer: Similar studies around the world demonstrate that herbicides could potentially reduce seed production and viability of many agricultural weeds. While there is potential to use this tactic to reduce seedbank replenishment there is also a risk that herbicide applications could also induce seed dormancy, which could prolong the seed persistence in the field, making weed management more complex in-crop.

Glyphosate applied at early budding can effectively reduce seed set on the main stem of flaxleaf fleabane – a management tool that could be incorporated into an integrated weed management program over summer.

How can this strategy be used in an integrated weed management plan?

Short answer: Herbicide applied at early budding stage can reduce the amount of viable seed set, however this tactic must not be used in isolation.

Longer answer: Large flaxleaf fleabane plants are hard to kill with herbicides, particularly if soil moisture is limited. They readily regrow after being cut off at harvest, drawing on large root reserves. Over summer, use the double knock technique after rain to treat regrowth while the branches are relatively ‘small’. Crop competition is very effective in reducing fleabane populations so choose competitive crops, narrow row spacing and set them up for success to minimise the opportunities for late germinating plants to gain a foot-hold. Strategic cultivation and regular sheep grazing are also effective tactics. Integration of chemical and non-chemical options could minimise the buildup of dormant seed in the seed bank.