Can ‘survivor’ weeds still be susceptible to glyphosate?

Annual ryegrass was the first cab-off-the-rank with resistance to glyphosate first recorded in Australia in 1996. In the last 20 years several other weed species have been added to the glyphosate resistant list but annual ryegrass remains the leader by far with over 600 resistant populations confirmed.

Dr Peter Boutsalis, Plant Science Consulting director and weeds researcher at Adelaide University has been in the thick of this unfolding dilemma, taking a leading role in testing for herbicide resistance and conducting random surveys across southern Australia to monitor the spread and evolution of resistance. 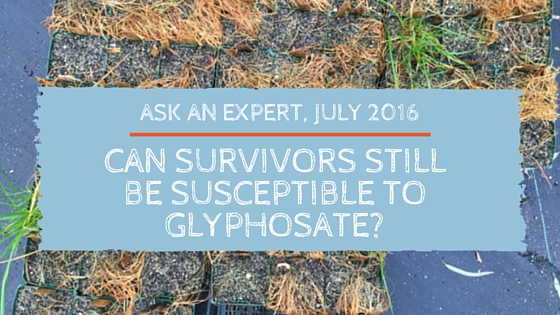 “We now know that 15 years of consistent use of glyphosate, without alternative weed control measures, will invariably lead to glyphosate resistance in ryegrass,” he says. “There are confirmed cases of resistant populations under many land management systems but we see the largest number of cases in winter cropping paddocks, along fencelines and beside roads.”

One area of particular interest to Dr Boutsalis is the fact that even if resistance is confirmed at a particular rate, sometimes the resistant plants will be effectively controlled with a higher rate. 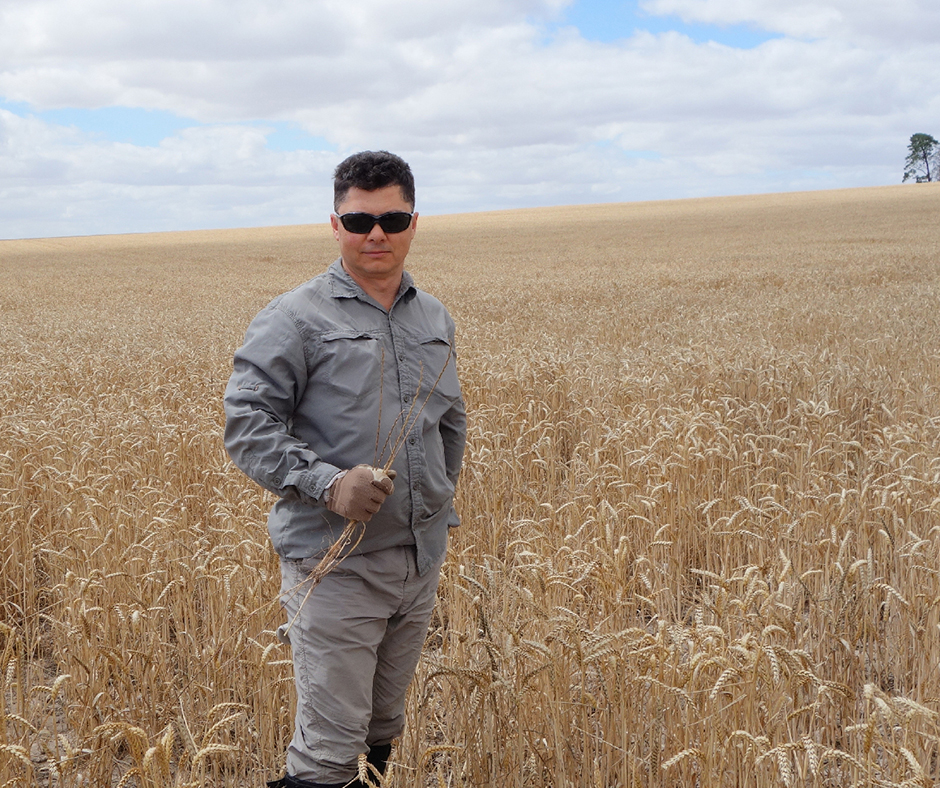 Dr Peter Boutsalis conducts random weed surveys across the southern states testing weeds for herbicide resistance under a range of management and land use conditions.

“This doesn’t mean that we can keep increasing the rate indefinitely,” he says. “It just means that if the population is susceptible to a higher rate, this information can be used to form part of an integrated management response to escalating resistance.”

How can a resistant plant still be susceptible?

Short answer: The resistance mechanism must work hard to ‘protect’ the plant but it can be overloaded.

Longer answer: The target site mechanism in annual ryegrass works by pumping the herbicide to the leaf tips and restricting translocation. A plant may be able to sustain this pump at one rate but at a higher rate there may be sufficient ‘leakage’ to kill the plant and stop it setting seed.

What is a good first response to confirmed glyphosate resistance?

Short answer: Glyphosate resistant weeds are often not good competitors when glyphosate is not used. Research has shown many instances of a ‘fitness penalty’ that makes these ‘weak survivors’ less competitive and so they set less seed.

Longer answer: If it is necessary to continue using glyphosate, apply a higher rate of glyphosate initially to reduce plant numbers and then use a different herbicide MOA to further reduce the number of potentially resistant plants setting seed. For best results with this double-knock, apply the second mode of action herbicide, e.g. paraquat, within three days of applying glyphosate.

Short answer: Don’t leave spraying fencelines until spring – try to get in early and treat weeds when they are small.

Longer answer: Resistant ryegrass is more sensitive to glyphosate when the conditions are optimal – aim for small, unstressed weeds, optimal spray coverage, including sufficient adjuvant, and spray in the cooler part of the day (below 30 degrees C). Resistant pollen can quickly spread at least 50 m into the paddock. Ryegrass cross-pollinates and there is a low, but increasing, incidence of populations possessing both target site and translocation resistance mechanisms. 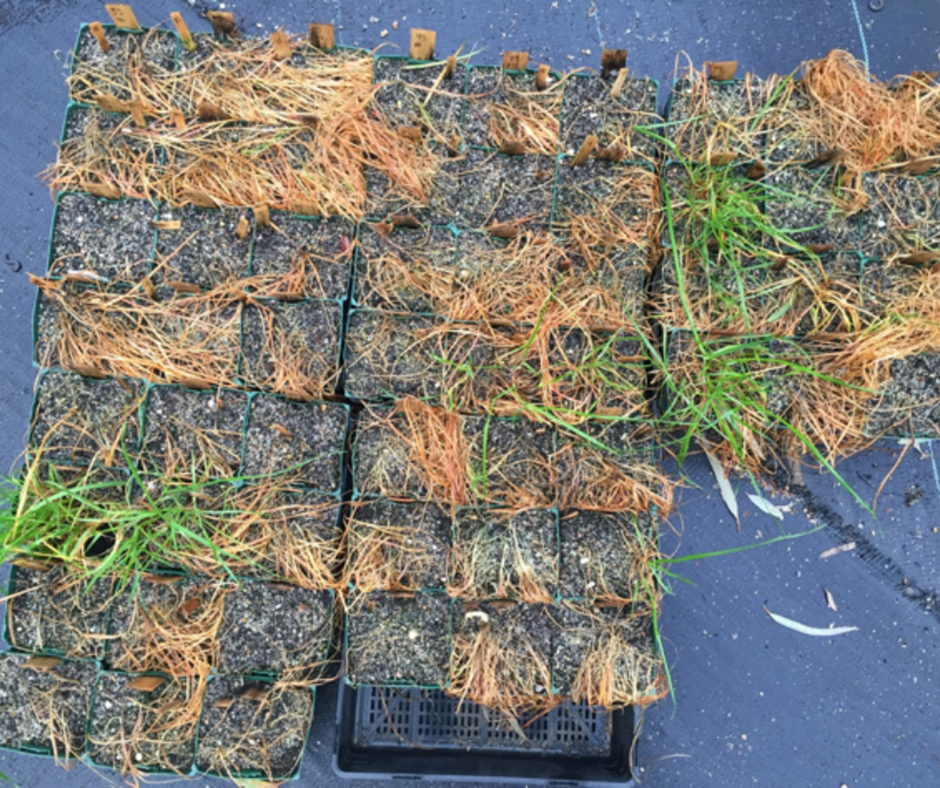 The 2015 random weed survey 2015 revealed an incidence of 9 per cent glyphosate resistance in annual ryegrass in the Wimmera region of Victoria. It is not possible to diagnose herbicide resistance in weeds in the field. The only way to know what herbicides particular weeds are susceptible to is to undertake scientific testing. The ‘Quick Test’ can be done on living plants and provides timely feedback on suitable herbicide options.

Concerns are being raised about the practical implications of this for summer weed control programs.
Mary O’Brien, a private consultant with extensive experience in managing spray drift, is keen to see growers fully adopt spray application practices that maximise herbicide efficacy and minimise off-target drift.

Mary O’Brien says the ‘community drift’ that can occur when a number of applicators are each putting a small amount of product in the air at the same time can have very damaging effects on off-target sites.
“The bottom line is that allowing spray to drift is like burning money,” she says. “Any product that doesn’t hit the target is wasted and the efficacy of the spray job is reduced, mildly resistant biotypes may survive as a result of low dose application and there is potential damage to sensitive crops and the environment.”
“The difficulty is that many growers want to spray at night to cover more ground when conditions are cooler and potentially weeds are less stressed. Having a restriction on night spraying does restrict the time available to cover the areas required.”
Having heard these concerns from growers across the country Mary keeps coming back to the fact that if there was a limitation to capacity at planting or at harvest, growers would scale up to get the job done in a timely manner.
“Buying another spray rig or employing a contractor is an additional cost, especially after a couple of tough seasons, but I really think this is insignificant against the cost of losing key products and the resultant escalation in herbicide resistance to the remaining herbicides,” says Mary. “This problem is not confined to 2,4-D or even to herbicides. I recently spoke to a stone fruit grower who was forced to dump his whole crop after a positive MRL return for a fungicide he had never even heard of, let alone used.”
What about just slowing down and lowering the boom during night spraying?
Short answer: This, coupled with a good nozzle, will reduce drift but it will never eliminate it.
Longer answer: The correct ground speed and boom height will have a large effect on the amount of product that remains in the air. The problem is that it only takes 1 per cent of the product remaining in the air to cause off-target damage.
Once there are a few operators putting just 1 per cent of their product in the air at the same time, the amount of product quickly accumulates and can potentially be very damaging. Mary calls this ‘community drift’.
Isn’t it better to spray weeds at night when it’s cooler?
Short answer: Not really.
Longer answer: Research by Bill Gordon showed that even if you keep everything else the same, night spraying can put at least three times more product in the air than daytime application, even if weather conditions are similar and there is no temperature inversion in place. The main difference between day and night is how the wind is moving across the landscape, rather than the wind speed.
Under inversion conditions, the air moves parallel to the ground surface and this means that the product can move significant distances away from the target before coming to the ground.
To achieve the best results through daytime spraying, applicators should focus on treating small, actively growing weeds. When there is good soil moisture, weeds are unlikely to be stressed even when the temperature is quite high.
Temperature inversion conditions are more common at night and in the early morning. These conditions generate a laminar flow of air across the landscape allowing small droplets to travel many kilometres away from the target site before coming to ground.
Can I use other products at night and just avoid using 2,4-D?
Short answer: The current changes to 2,4-D labels has drawn a lot of attention but the problem is the same for all crop protection sprays – herbicides, fungicides and insecticides.
Longer answer: Different products have different properties and some may work better at night but the problem is the sensitivity of some crops to certain products, such as 2,4-D. All products are tested for their efficacy and the label provides detailed information about the required spray quality and spray application conditions. Many products have explicit label instructions regarding wind speed, temperature inversions (or laminar flow) and night spraying.
Given the high risk of drift at night, applicators need to be very confident that there is no inversion present, and weather conditions should be measured at least every 15 minutes to ensure wind speed remains above 11 kilometres per hour. An on-board weather station is the best way to monitor conditions.
A visual demonstration using smoke to simulate the the lateral movement of small spray droplets when a temperature inversion is in place.
What can I do to improve spray efficacy and avoid spray drift?
Short answer: If you do just one thing – change your nozzle.
Longer answer: All the factors that increase drift also reduce efficacy. To improve efficacy and reduce drift, use a better nozzle (larger spray quality) and appropriate water rates (matched to spray quality and stubble load), slow down and keep the boom low. Wind is required to push product downward and onto the target, and remember that the 3–15 km/h wind speed is for day time conditions only, this does not apply at night.