Chaff carts were made for feeding livestock

Baled chaff collected at harvest as a weed control measure is providing a cheap energy source for sheep in confinement paddocks.

Chaff carts were invented in Canada in the 1970s as a fodder collection system, so they have always had an association with livestock. In the late 1980s they were introduced to Australia and used as one of the first harvest weed seed control (HWSC) tools to manage herbicide-resistant ryegrass and wild radish in Western Australia.

Depending on the grower’s situation, chaff heaps in Australia have been burned, grazed then burned, sold as loose chaff for horse feed, grazed or knocked down then seeded through (unburned) and most recently, baled and used on-farm as conserved fodder. 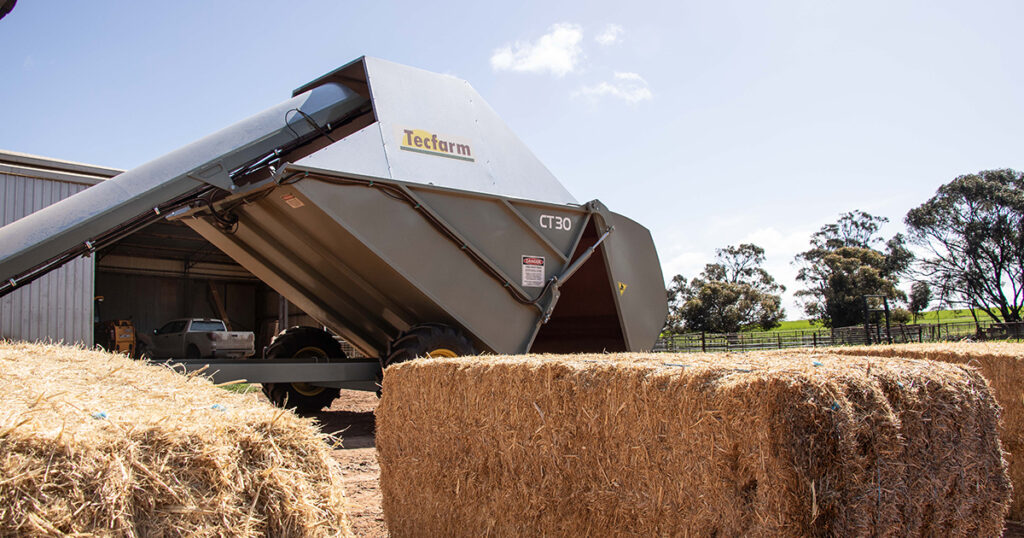 Different model chaff carts incorporate more or less straw with the chaff, which can affect the feed value of the bales.

This latest method fits very well with the move to confinement feeding of sheep and brings the use of the chaff cart almost full circle. Given the long-standing association with fodder conservation, the value of the chaff as a feed source is well known, particularly for sheep.

A HWSC Calculator developed by WeedSmart western extension agronomist Peter Newman, now enables growers to quickly estimate the potential value of baling chaff from chaff heaps and feeding it out in on-farm confinement areas. Upper Eyre Peninsula mixed farmer, Bruce Heddle, instigated the addition of the new feature to the calculator and provided the energy figures from his own testing of different chaff types. Planfarm livestock consultant, Paul Omodei, worked with Peter to make sure the calculator took into account the important considerations for livestock production.

Although there is variability in feed value results, ballpark energy figures are in the order of 6.7 MJ/kg DM for wheat chaff, 7.7 MJ/kg DM for barley chaff, and 8 MJ/kg DM for canola and pulse chaff. Peter says the cost to deliver baled barley chaff to an on-farm feedlot is around 1.5 c/MJ compared to barley grain for 2.3 c/MJ, based on these feed values that Bruce Heddle provided.

“Chaff carts incorporate more or less straw with the chaff depending on the cart model, and while some extra straw makes baling and handling easier, it also reduces the feed value slightly, so that needs to be factored in,” he says. “Some growers are already set-up for hay making while others might choose to employ a contractor.”

Bruce says having the sheep confined during this period reduces their workload as the sheep are easy to look after and feeding out is only needed once a week. They are able to easily monitor the flock and attend to any problems quickly, and don’t have to spend time moving sheep around during seeding.

The pastures also benefit from a spell from grazing for these months, so the sheep are turned out into refreshed pasture after their confinement.

Jarred Tilley is another mixed farmer who has been making chaff bales for use in their family’s sheep enterprise at Kapunda in South Australia for the last two years. Jarred has been fencing off less productive areas on their farms and using them as confinement yards for their sheep in May and June. Their high density baler creates large bales that weigh 500 to 550 kg each from chaff dumps that are knocked down using a telehandler and then raked to save time when baling. Having their own hay-making equipment helps justify the chaff baling operation.

“We have fed 500 ewes in an 8 hectare paddock for six weeks with a diet of chaff bales, regular hay and a lick feeder,” he says. “The benefits are probably marginal for us using wheat chaff, but the canola and pulse chaff is a better feed supplement. The feed quality of the chaff is not always as good as we would like.”

Jarred says that the sheep spread the chaff out in the confinement paddocks and often leave more ground cover in those paddocks than when the sheep went in.

Chaff is a low-cost feed that is only sufficient for maintenance energy levels for sheep. Other feeds need to be included in the feed ration to promote growth or support lactation. Studies that Ed Riggall at AgPro Management conducted at multiple sites in Western Australia over three years demonstrated that sheep with access to chaff heaps from various crops gained an average of 2 kg in the first three weeks. This was 500 g more than sheep grazing stubbles where the chaff was spread out by the harvester. 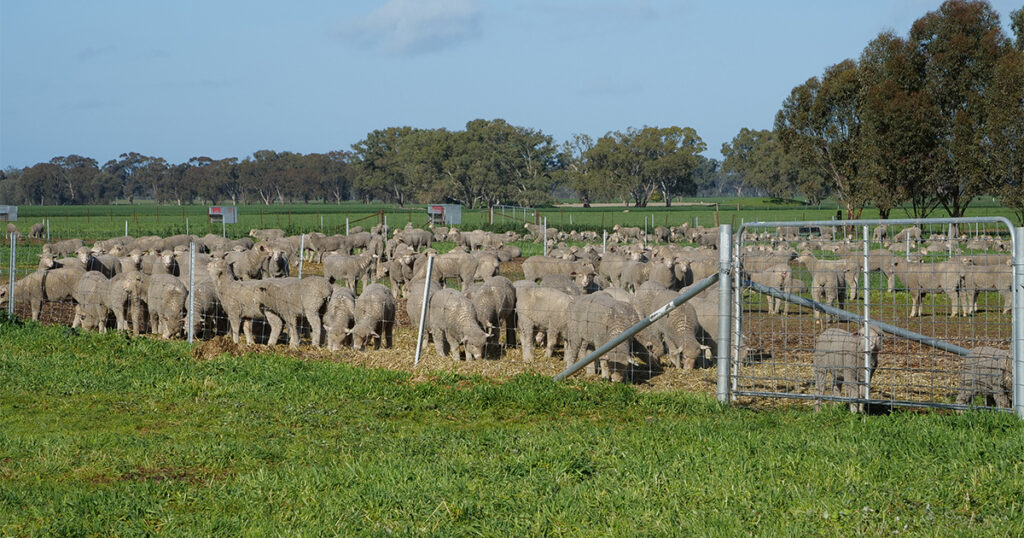 At the end of six weeks grazing the sheep with access to chaff piles had gained about 100 g, while sheep without access to the chaff piles had lost almost 2 kg compared to their starting weight. Additional benefits might be expected in a confinement feeding situation where the chaff is easier to forage and is potentially available to the stock for longer as part of a mixed ration.

By making use of the chaff within their own operations these growers are gaining benefit from a resource that is otherwise wasted, and avoid the risks associated with burning chaff heaps.

All harvest weed seed control methods provide similar levels of weed control – collecting, concentrating or destroying over 90 per cent of the weed seed that enters the front of a well set-up harvester. Australian farmers are spoiled for choice when it comes to the options for collecting and destroying weed seed at harvest and keeping downward pressure on herbicide resistance. The WeedSmart HWSC Calculator tool allows growers and agronomists to test different scenarios using their own figures to estimate the costs and benefits of the different systems available.