A move into controlled traffic ten years ago opened up an opportunity for Mark Wandel to avoid the need to burn stubble to control herbicide resistant annual ryegrass. 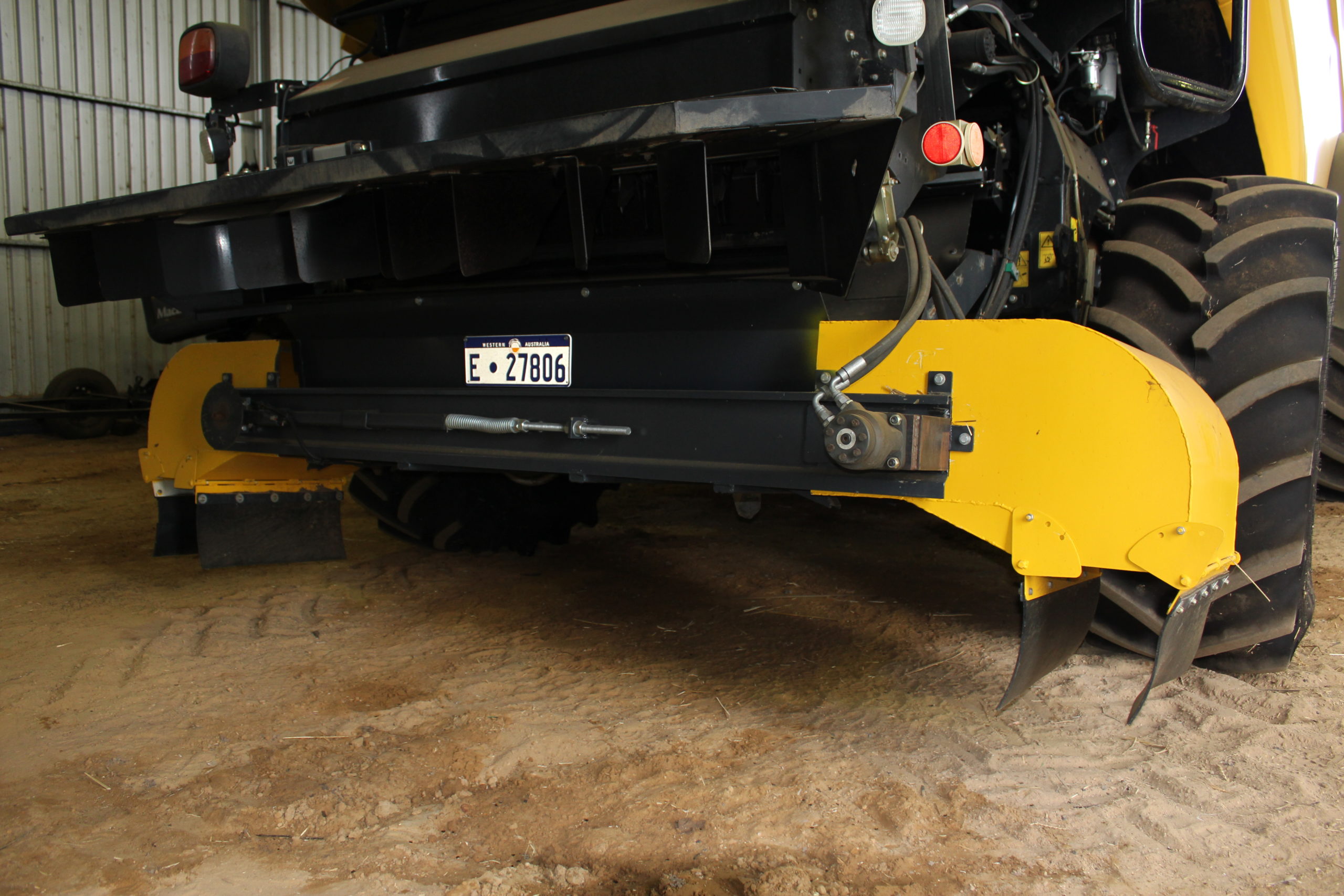 Starting in 2006 Mark and another grower, Owen Brownley, invented a ‘chaff blower and cyclone’ adaption on a harvester to deliver the weed-laden chaff into one tramline, or wheeltrack, while spreading the straw component evenly across the full width of the controlled traffic beds.

After a few years using this configuration Mark changed headers and developed a conveyor belt and 90 degree chaff deck system that can switch direction to always deliver chaff into the western tramline.

“We now have four harvesters fitted with the chaff deck and are very happy with the results we are getting, clearing weed seed from the beds and concentrating them in the one tramline where they are easier to treat,” says Mark.

“There are other chaff deck configurations that deliver the chaff into both tramlines but we have found the single chaff row works very well and reduces the weedy area that requires additional treatment.”

Mark gets the various components manufactured as required and then assembles and fits each chaff deck on-farm—the most recent build occurring just last year.

Before developing the chaff deck Mark used various techniques to manage weeds that were present at harvest including spraying under canola windrows, swathing barley, spraytopping legumes and burning narrow windrows.

Now he can retain all crop residues in the field regardless of the crop or seasonal conditions. He says that weed control results are best in wet years for two reasons—firstly because in-crop operations compact the tramlines making them a hostile environment for weeds to grow in and secondly, rain after harvest aids in the composting of the chaff in the tramline, which also kills a large proportion of the weed seeds.

Any rain over summer tends to pool in the tramlines and the wet chaff quickly rots away, taking the weed seed with it.

Weed seeds that survive in the wheeltrack face stiff competition for moisture, light and nutrients. These weeds are relatively easy to treat using glyphosate or paraquat through shielded units every 9 m on a 36 m boomspray.

In drier years more weed seed survives and germinates but there is stiff competition for moisture, light and nutrients due to the concentration of weed seeds in the very narrow band. These weeds are relatively easy to treat using a 200 L tank on their 36 m boomspray to deliver glyphosate or paraquat through shielded units over the chaff row in the 9 metre wide controlled traffic system.

“This way we can apply herbicide to any ryegrass that does germinate in the tramline while spraying the crop with whatever herbicide or fungicide is needed,” he says.

“This system works well for managing resistant ryegrass and any volunteer wheat growing in our malt barley.”

There are now 40 chaff deck units in operation in the Esperance area, with another 30-odd expected to be in use this harvest. AHRI researchers plan to evaluate the efficacy of the chaff decks as a harvest weed seed control tactic in the near future and Mark Wandel is quietly confident that any scientific evaluation will confirm what he has observed over nearly ten years.