As the 2013–2016 drought bit harder in NSW’s Riverina, Ardlethan farmers Lou and Charlie Clemson were thinking about ways to better utilise more of their property, particularly the 200 ha of non-arable country.

Using a NSW State Government drought assistance grant to supplement their own funds they have installed a laneway through the middle of their property, Wongajong, to link the hilly paddocks with the stockyards and provide easy access to all the cropping paddocks between. 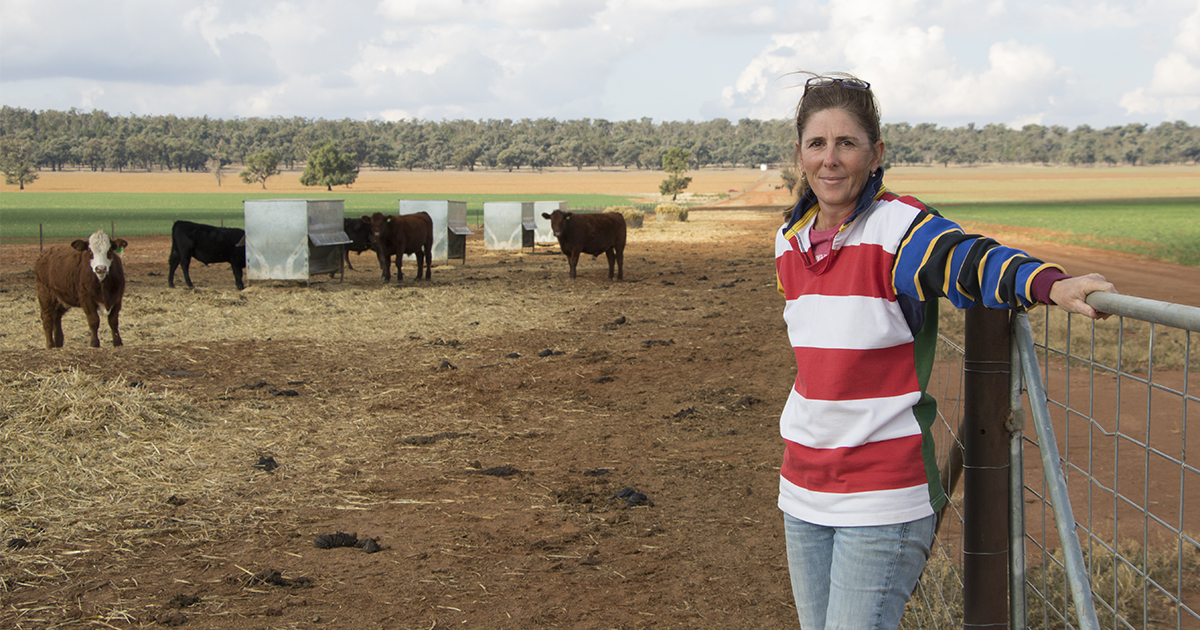 Lou Clemson says the laneway allows easy movement of stock through the cropping area and also provides an excellent confinement area with troughed water and creep feeders. The timbered hill paddock is key to the system’s success, providing native pasture for the breeding herd.

Lou says the changes to their business and their weed management have been amazing. “We now have another income stream, and cattle have been very profitable since the drought,” she said. “And we are using less herbicide to manage weeds.”

The re-introduction of livestock to Wongajong started in 2010 when the Clemsons bought 300 steers to make use of a frosted wheat crop. “We fed the steers for 5 months and made good money out of what would have otherwise been a failed crop,” said Lou. “After that we fenced off the hill and added the central laneway and watering points. We are really happy with how well this system is working and see benefits across our whole cropping operation.”

“Growing early varieties is the key to maximising the feed benefit of fodder crops such as Moby barley and Brenan and Naparoo feed wheats, which we plant in February or March,” she said. “In paddocks where we have some annual ryegrass pressure we have sown feed barley in February–March, weaned calves onto it in May and grazed until September. This 73 ha paddock alone turned off 200 prime yearlings.”

With some welcome rain in December, the Clemsons sprayed out the barley and took the opportunity to sow cowpeas over summer. “This year we weaned part of the herd in January and the calves went straight onto the cowpeas where they remained until late April. The cowpeas even podded up and we could have stripped them but decided to just continue grazing. The added nitrogen will also boost the next crop and build soil fertility.”

Cowpeas planted opportunistically on some December rain provided perfect feed for newly weaned calves from January until late April. In addition to the feed value the cowpeas have also provided a boost to soil fertility.

With two back to back seasons of crop competition and sustained grazing pressure, the ryegrass is well under control and the Clemsons have sown Condo grain wheat this winter. After removing the young stock from the cowpeas the Clemsons introduced them to creep feeders offering hay, feed barley and a magnesium calcium supplement in the central laneway.

Lou said their system relies on the 200 ha of hilly country where they run their breeding herd. The cows calve in the hill paddock in July then have access to crop stubbles straight after harvest until January when the cows return to the hill paddocks and the calves are weaned onto feed.

“In this system, Wongajong can carry 200 breeding cows and 50 replacement heifers but no more,” she said. “This is working so well that we are keen to build our herd and will replicate the laneway and fodder cropping system on a second property nearby. We have been expanding our area for both cropping and livestock with additional land purchased and leased.”

Looking across Wongajong, the top paddock grew cowpeas that were grazed over summer, the next paddock down the hill has feed barley ready for grazing and then the laneway where the young cattle are introduced to hay and grain once their rumens are mature. The Lemken speed tiller will be used to prepare the cowpea paddock for sowing the high yielding, short season Condo wheat.

“We identify paddocks that need a spell from cropping and also look at the weed burden,” said Lou. “Grazing barley is our go-to crop for weedy paddocks. It does a good job competing with annual ryegrass and gives us several options such as making hay or grazing and then spraying out.”

The cattle strip graze the fodder crops at a density of 2 head/ha to maximise the feed value and weed control benefits. Electric fencing is used where necessary to manage the grazing intensity and provide fresh feed. Most of the fodder crops will be grazed out and sprayed in spring to clean-up for the following winter. The Clemsons are now planning to extend their fodder cropping program to hay and silage production.

Forage barley has proven to be the most useful crop for livestock production and weed control.

Charlie and Lou use a Lemken Helidor speed tiller to lightly cultivate paddocks that have been sprayed out after grazing. Paddocks are then rested for seven months, from late spring through summer, before they are re-sown. The combination of several non-herbicide weed control tactics such as strip grazing, fodder conservation and the speed tiller have resulted in an overall reduction in herbicide use.

“Sowing early gives us the greatest number of choices,” said Lou. “Some years we would expect about 10 per cent of our crops to be frost affected, but by sowing early we can achieve higher yields and this can make up for losses to frost.”

Lou said there has been a noticeable change in their attitude towards weeds with Charlie being much less stressed. Having the canola and wheat sprayed on time is important while there is more flexibility with spraying times for the grazing crops.

“If there are weeds visible in the paddock we can stay relaxed knowing that once the cattle have finished grazing and been sold, the paddock will be sprayed out before the ryegrass sets seed, and any survivors will be killed with the Lemken Helidor,” she said.

The Clemsons use a Lemken speed tiller straight after harvest to manage stubble and weeds. Provided there is some soil moisture present the cultivation to a depth of up to 10 cm or so causes about 80 per cent of the weed seeds to germinate, allowing a very effective spray opportunity.

Cultivation with the Lemken Helidor machine stimulates weed germination and breaks up the stubble.

Operating at 15–16 km/hr, the 12 m wide cultivator also breaks up and spreads the stubble and throws soil over some of the stubble to aid decomposition. The cattle still have access to valuable feed in paddocks where the Lemken has been used. This light cultivation means there is no need to burn stubble and seeding the next crop is easy.

“Summer cropping opportunities seem to be more common in recent years and we have had success with both cowpeas and sorghum,” said Lou. “The Supa Sudan sorghum we grew this past summer came back three times and provided excellent feed value but it also used too much soil moisture and might limit our immediate cropping choices for that paddock.”

“In winter, forage barley is followed by TT canola then a grazing wheat with the option to graze, make hay or harvest the grain.”

In addition to annual ryegrass incursions the Clemsons have also seen black oats, wild radish and brome grass populations cleaned up through this combination of grazing and cropping.