Invest in the weak link crop to avoid weed blow-out

Kym and Katie I’Anson know that wheat is the weak link in their 2200 ha continuous cropping enterprise in the Marrabel district in South Australia.

While hay production and canola provide several opportunities to suppress weeds, ryegrass can flourish in the wheat phase if left unchecked.

Kym and Katie know that they can not control weeds using chemicals alone. Crop competition is their number one tactic to reduce weed growth and seed production, and all other tactics are aimed at stopping weed seed set on the remaining weeds.

“The sodic patches on the farm provide an ideal environment for weeds to establish and set a huge amount of seed,” says Kym. “Applying high rates of gypsum to these patches has opened up the soil and allowed water to penetrate to depth rather than pond on the surface. Long-term waterlogging had caused acidification and denitrification at the surface so we have applied high rates of lime and chicken manure to reverse this and the result is that crops can now grow well in these areas and out-compete the weeds.”

Addressing soil pH also releases nutrients, such as phosphorus, that are unavailable to plants when the soil is acidic. Kym says that up to 80 units of P can be tied up in their acid soils.

“The grey shale soils on the ridges are generally lighter textured and crops can burn off easily,” he says. “We don’t want high seeding rates or too much nitrogen applied to these soils.”

Another ‘trick’ that the I’Ansons have employed to increase crop competition is to use a precision planter to seed the paddocks at variable rates to match ryegrass pressure. The standard seeding rate for soft wheat is 70 kg/ha, but in weedy or frosty patches Kym will increase the rate up to 100 kg/ha of seed. Wheat is sown on 25 cm (10 inch) row spacing with a DBS precision planter. 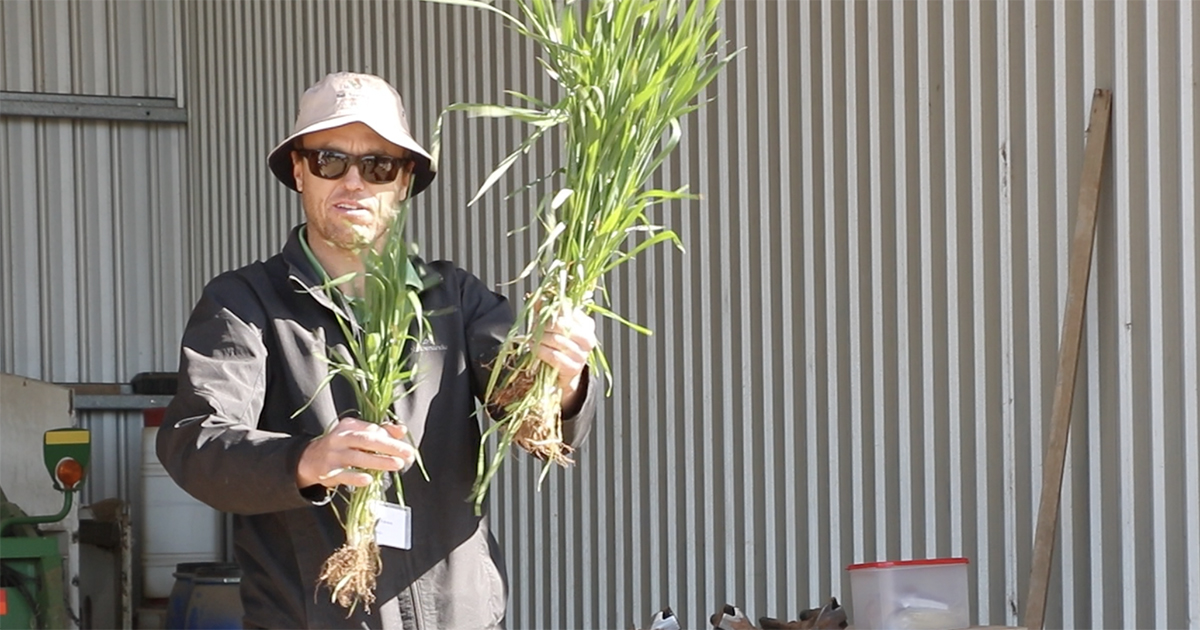 Temperature makes a big difference to the size of wheat plants on the I’Anson’s properties in the Marrabel district, SA. Sowing compromised crops at high seeding rates reduces ryegrass lodging and increases the effectiveness of the impact mill.

They have found that the precision seeder results in rapid and even crop establishment, giving the crop a considerable advantage over weeds. Kym says the germination of the ryegrass is delayed somewhat compared to the crop due to the minimal soil disturbance in the inter-row.

“From a weeds perspective, the Year 1 results from variable rate management can be astonishing – you can go from a lawn of ryegrass with no crop to having crop up and growing, weed numbers halved and almost straight away you are back in control of the weed situation where you could feasibly use herbicide again,” says Kym.

Bring back the double knock

In the early years of double-knock trial work, researchers tested the tactic on ryegrass in heavily infested paddocks on I’Anson Farms. Kym says the ryegrass was so thick that the glyphosate application only achieved a 68 per cent kill rate with the problem being shading, not glyphosate resistance. With over half of the plants ‘out of the way’, the paraquat application was able to kill 93 per cent of the remaining plants – but even this was not good enough when weed numbers were so high.

“Wheat is the weakest link in our rotation but with weed numbers reduced we are now able to use the double-knock to good effect prior to seeding,” says Kym. “We like to start early and concentrate on the weedy patches. If necessary, we will do two rounds of the double-knock, particularly ahead of sowing wheat in mid to late May. In some years we will do a triple knock of glyphosate–paraquat–paraquat to make sure the paddocks are clean before we plant.”

The I’Ansons rely on the double-knock plus crop competition in wheat as they don’t have many options for pre-emergence herbicides when oaten hay is next in the rotation.

On the sections of the farms that experience the coolest climate and frequent frosts, the wheat grows slowly, regardless of the improvements in soil health and nutrition. The crops are generally much shorter than paddocks with a warmer climate, but Kym keeps the crop density high, which holds the ryegrass seed heads up where they can be easily collected at harvest time.

Having invested in a Redekop SCU fitted to a John Deere header, the I’Ansons implement harvest weed seed control in all their grain crops. Kym says the mill effectively treats ryegrass and other weed seeds, as well as grain that exits the harvester. This means their paddocks are cleaner after summer rains, so they can achieve good coverage with the autumn knockdown on newly emerging ryegrass.

“We decided to buy a larger second-hand header than we really need for our cropping program because we see value in the impact mill technology,” says Kym. “In the wheat we don’t have any bare patches in the crop and, even though the weed numbers are higher than in other crops, the ryegrass doesn’t lodge and we can destroy the ryegrass seed through the impact mill.”