When glyphosate-resistant summer grass starts to cause yield losses in cotton, growers obviously need to add some non-glyphosate options to their system to protect yields and prevent further weed blowouts. The questions then become where to add non-glyphosate tactics to get most benefit, and how many are needed? 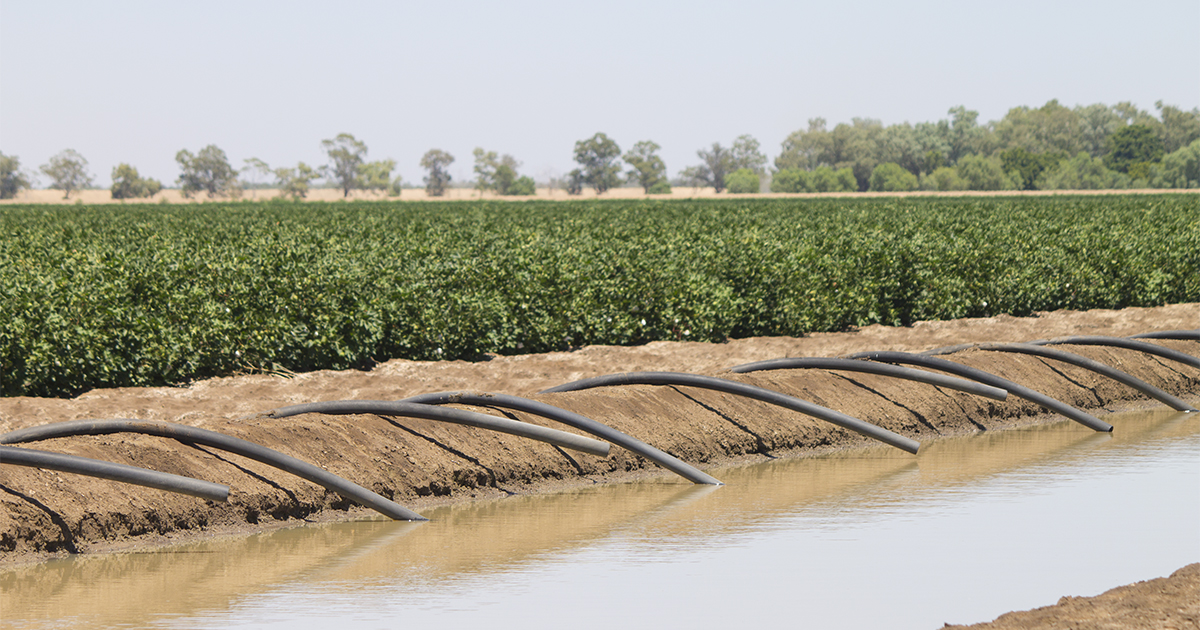 What’s the remaining value of glyphosate in rotations with glyphosate-resistant awnless barnyard grass?

Since the first confirmation of glyphosate resistance in awnless barnyard grass, many other resistant populations have been found, and these populations don’t all display the same level of resistance.

David said he used a simple irrigated rotation, with modest use of non-glyphosate options in an otherwise glyphosate dominated system. He varied the effectiveness of glyphosate from around 40 percent (‘moderate’ resistance) to around five percent (‘strong’ resistance).

The results show two key things. First, both systems are still making money after five years. High levels of crop competition keep seed production per escaping weed low, and the addition of a few effective tactics reduces the number of surviving plants to moderate/know levels of between six and 14 plants per square metre at the end of the fifth season.

Secondly, however, both systems are heading towards failure. Weed and seedbank numbers are increasing, however slowly. And while gross margins are the same at the end of season one, there is a predicted difference of around $500/ha between the gross returns in season five.

David says there are three lessons here. First, strong crop competitive effects might mask the seriousness of resistance issues in irrigated cotton, should they be present. Second, there are good reasons to determine just how strongly resistant your resistant awnless barnyard grass population is, if you’re going to be sticking with a system that is predominately about the use of glyphosate. And third, allowing a slow decline with somewhat-inadequate weed management looks likely to have a substantial cost as the years pass by. We’ve made many assumptions in this example – in particular, that irrigated cotton is planted and provided with resources to allow for strong competitiveness against the weed. We’ve also made assumptions about crop and herbicide costs, average yields and prices. “You could run BYGUM with a different set of assumptions that fit your experiences, and see if the results change.

Scenario #2 – Testing the value of a cover crop

Can summer cover crops be used to get on top of weed populations?

In a one-in-one-out rotation of dryland cotton, summer fallows offer a chance to get on top of weed populations through vigorous use of non-crop herbicides. However, with no crop competition present, they can also offer weed escapes an opportunity to set a lot of seed, especially when the key herbicide in both crop and fallow, glyphosate, is no longer effective.

“Cover crops allow growers to maintain some competition even in non-crop seasons,” David Thornby says. “A good stand of millet (as simulated in BYGUM), sprayed out before seed set, allows for a combination of late season herbicide use to clean up survivors and mid-season competition with glyphosate- resistant barnyard grass, reducing seed set per plant.”

The first scenario is a basic one-in- one-out rotation. This contains the assumption that the barnyard grass population is resistant to glyphosate, and that an early season residual and mid-season inter-row cultivation are used to provide some control in crop: summer fallows use two cultivations and a double knock. In scenario 2 David replaced the second summer fallow with a cover crop.

The cover crop includes cultivation, a double knock, spray out (assuming this is with a non-glyphosate product effective on glyphosate, such as paraquat), and a late application of paraquat over the now-dead millet. “The cover crop is more expensive than the summer fallow, and actual plant numbers per square metre are not reduced all that much (1.1 to 0.8 per square metre),” David says. “But there is a substantial difference in seeds returned to the seed bank.”

The comparison scenario shows a substantial increase in the yield from the final cotton crop, due to the strong reduction in seed bank numbers at the end of the cover crop season. “The benefits of the cover crop come due, as expected, in the following crop, where the seed bank has been driven down and emerging weed numbers are low,” David said. “Over the course of the whole rotation, incorporating one cover crop every second summer fallow is predicted to be worth almost $200/ha in increased yield.

“There is more than one way to protect future yields in a dryland rotation, but using cover crop competition certainly seems to bear looking at. “We’ve made many assumptions in this example – in particular, that planting time and summer rainfall are conducive to good cover crop growth, resulting in high competition, that the barnyard grass population is strongly resistant to glyphosate, and that the cover crop doesn’t reduce moisture availability to the following cotton crop. “We’ve also made assumptions about crop and herbicide costs, average yields and prices. “Once again, users could run BYGUM with a different set of assumptions that fit their experiences, and see if the results change.”

Can you control a glyphosate-resistant grass by adding a residual in irrigated cotton?

In situations where a glyphosate-resistant summer grass starts to cause yield losses in cotton, growers obviously need to add some non-glyphosate options to their system to protect yields and prevent further weed blowouts. The questions then become where to add non-glyphosate tactics, to get most benefit, and how many are needed?

David Thornby used BYGUM to investigate this question. First he compared a system with glyphosate-resistant barnyard grass where only glyphosate is used with the same system with an early-season (pre- or at-planting) residual added.

The yield results of adding a single residual are striking.

The glyphosate-only system is still producing some yields (Figure 2 – primarily due to the competitiveness of irrigated cotton), but end-of-season weed numbers are very high and the potential of the system is being seriously under-utilised. “Adding a single residual can reduce early-season weed numbers dramatically, and because this is when most of the competition effects occur, this has a huge benefit for the bottom line,” David said.

Figure 1: Irrigated cotton rotation with an early-season residual. While we’ve used ‘a residual’ in the notation here, a rotation of suitable products from different modes of action should be used in the field. The glyphosate-alone system is the same as this one, without the early season residual.

Figure 2: A comparison of gross margin and barnyard grass numbers at end-of-season between glyphosate alone (top) and glyphosate plus a single, early-season residual.

“However, end-of-season weed numbers (and seedbank density) are still unacceptably high, so a single residual doesn’t appear to be enough of an addition, despite the dramatic effect.

“A single year of poor control from the residual (rather than the average of around 85 percent efficacy) would certainly result in a blowout.”

Adding a mid- or late-season tactic provides some insurance against weed blowouts and seed production. Because late weed germinants in vigorous cotton stands don’t produce a lot of seed per plant, the effects on yield aren’t so dramatic. However reducing surviving plants and especially reducing the seed bank size are critically important insurance against future blowouts and selection of resistance for other modes of action.

David tried two different tactics in BYGUM, adding either a layby residual to each crop or a mid-season knockdown.

Adding a layby reduces the seed bank somewhat, and cuts surviving plants at end-season down to around 25 per square metre. This still appears to be too many survivors for comfort, but it does represent a substantial improvement over an early- season residual alone, and offers insurance against future blowouts.

BYGUM predicts that it can be sustained at least for the five-year rotation. This comes at a cost, however: the reductions in late-season weed numbers are offset by the price of the extra residual and BYGUM includes a penalty due to phytotoxicity.

In comparison with the layby system, a system with a mid-season knockdown, rotating between options including Group A herbicides, shielded paraquat and inter-row tillage improves the gross margin (due to a combination of taking out some weed competition and having some options with lower phytotoxicity-related yield penalties), but leaves more end-of-season survivors.

“So this is not an ideal system either – but is certainly an improvement in all ways over a single-residual system,” David said.

“These analyses show that while a single early-season residual can do a lot of heavy lifting in terms of reducing weed competitiveness, it’s not enough on its own for long-term sustainability. Late or mid-season tactics provide some insurance.”

“BYGUM predicts that while good returns can be sustained at least for five years with this ‘plus two’ strategy, more non-glyphosate tactics would be needed to drive the seed bank to very low levels. We’ve made many assumptions in this example—in particular, that irrigated cotton is planted and provided with resources to allow for strong competitiveness against the weed, that resistance to glyphosate is quite strong, and that good efficacy is generally the case for residual applications. Pre-simulation weed numbers are assumed to be moderate and we’ve also made assumptions about crop and herbicide costs, average yields and prices.”