The last in-crop herbicide option for the control of annual ryegrass in break crops is slipping away. Herbicide resistance testing in 2015 of weeds collected across the Eyre Peninsula in late 2014 has found that 7 per cent of the populations tested in the southern Eyre Peninsula are resistant to the Group A herbicide, clethodim.

Dr Gurjeet Gill, Associate Professor at University of Adelaide, says that the use of pre-emergent herbicides alone in break crops like canola is unreliable at best and the loss of the only post-emergent option would have dire consequences for break cropping in the southern and western regions. 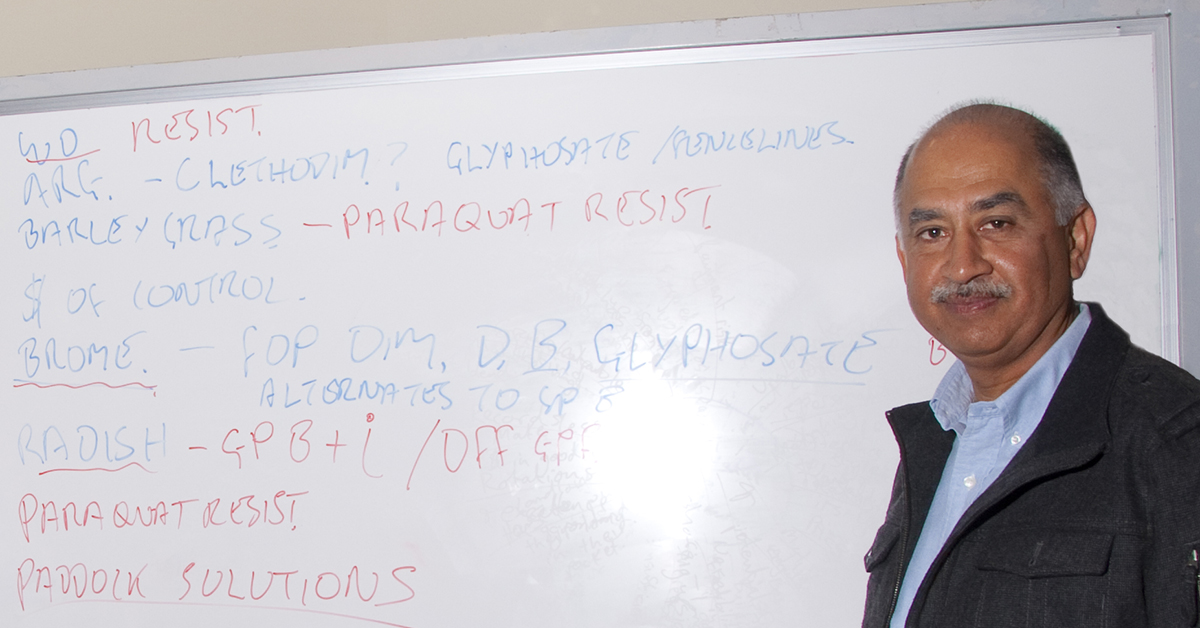 Dr Gurjeet Gill, Associate Professor at University of Adelaide says that variety selection, crop competition, controlling survivors and spray application timing and technique all make a difference when it comes to extending the useful life of herbicides.

“Our Weed Science team has been investigating ways to protect this chemistry and extend its life,” he says. “Variety selection, crop competition, controlling survivors and spray application timing and technique all make a difference and need to be implemented as quickly as possible.”

“In a field where the ryegrass was known to be resistant to clethodim we tested three canola cultivars—an open pollinated cultivar, ATR-Stingray and two triazine tolerant hybrids—Hyola 559TT and Hyola 750TT against three herbicide treatments,” says Dr Gill.

“Where no herbicides were applied, the high biomass hybrid Hyola 750TT suppressed the number of ryegrass seed spikes by about 30 per cent through crop competition alone.”

When a regime of pre-emergent herbicide applications was applied, both hybrid cultivars suppressed spike production by about 50 per cent compared to the open-pollinated cultivar.

How can I keep clethodim working and avoid resistance evolving?

Short answer: Use as many tactics as possible in each crop phase.

Longer answer: Clethodim is an effective herbicide in susceptible weed populations and provides another tactic to reduce seed set in-crop. Plan to use pre-em herbicides, choose competitive cultivars and implement one or even two harvest weed seed control tactics such as narrow windrow burning, crop topping or seed destruction to remove any weeds that escaped the clethodim treatment.

How can clethodim still be an effective control tactic in clethodim-resistant ryegrass populations?

Short answer: Application timing can have a significant effect on the efficacy of some herbicides, including clethodim.

Longer answer: Frost and weed size both affect clethodim efficacy. If resistance to clethodim is evident, applying the product to small (up to 3-leaf stage) annual ryegrass plants under warmer conditions improves the level of control. Wait for a couple of days after a frost for the ryegrass to be actively growing. Consider spraying when there is a cold front predicted as the cloud cover reduces the chance of frost. Combining clethodim and butroxydim and applying to small clethodim-resistant ryegrass plants can be an effective tactic. Note: frost does not affect the efficacy of clethodim in susceptible populations.

How can I be certain that herbicide residues in the soil have fully degraded at planting?

“Testing takes the guesswork out of the equation and gives farmers baseline information that they can use to monitor changes in the weeds on their farms,” he said. “If low level resistance is identified early there are many more management options available compared to situations where full blown resistance has taken hold.” Dr Boutsalis said the over use and over reliance on particular herbicides will unavoidably lead to herbicide resistance developing. “We often hear of farmers applying herbicide even though they are not sure if it will work,” he said. The $300 to $400 cost of testing is insignificant compared to the cost of wasted herbicide, lost production and the costs of driving down a large seed bank of resistant weeds. What herbicide resistance tests are available to farmers in Australia? Short answer: The ‘quick’ test using the whole plant and the ‘seed’ test. Longer answer: The ‘quick’ test uses plant samples collected on farm and sent to the laboratory. The plants are revived and planted into pots then tested against the required herbicides. The ‘seed’ test requires the collection of ripe seed, which is planted out at the laboratory. After dormancy has been broken and the seedlings have started to grow they are tested for their response to herbicides. Both tests are equally accurate. The ‘quick’ test can not test for resistance to some pre-emergent herbicides, such as trifluralin. Which is the most common test that farmers use? Short answer: The seed test. Longer answer: Collecting seed before or at harvest is the most common method used. The collected seed must be mature, from green to when the seed changes colour. Before harvest collect 30 to 40 ryegrass seedheads or several handfuls of wild oats seed. After harvest it is common to find seedheads still in the paddock or samples of contaminated grain can be sent for analysis. Where is the best place to collect samples? Short answer: From suspicious or high risk areas. Longer answer: Herbicide resistance can develop in high risk areas like fencelines or at random through a paddock. Visual observations and changes on the yield monitor in the header can indicate good places to collect seed. If collecting plant samples, look for weeds at the early tillering stage that appear to have ‘escaped’ previous herbicide treatment. Collect 50 to 100 small plants or fewer larger plants. Shake off the soil from the roots, place in a plastic bag and send to the laboratory. What’s involved in sending samples? Short answer: Pick, pack, register and ship. Longer answer: Each sample needs to arrive at the laboratory with suitable identification and instructions. Register the samples online to get a unique sample number and to provide the information required, such as which herbicides you want to test against. Plant Science Consulting and Charles Sturt University both offer commercial herbicide resistance seed testing. Find the details under Point 4 of the 10 Point Plan on the WeedSmart website.   How to ask a WeedSmart question Ask your questions about the spread of herbicide resistance, or any herbicide resistance management strategy, using this blog or using Twitter @WeedSmartAU.