Evidence is mounting that summer crops really can be an effective weapon in the war on herbicide resistant weeds.

With soil moisture at a premium, there is nothing spare to waste on summer growing weeds.

With four of the most difficult to control summer weeds, feathertop Rhodes grass (FTR), awnless barnyard grass, common sowthistle and flaxleaf fleabane, now with confirmed cases of glyphosate resistance, the pressure is on to find effective non-herbicide control tactics. These weeds can produce 40,000, 42,000, 25,000 and 110,000 seeds per plant respectively. Other studies have found these numbers could be even higher, so every effort to reduce seed production is worthwhile. 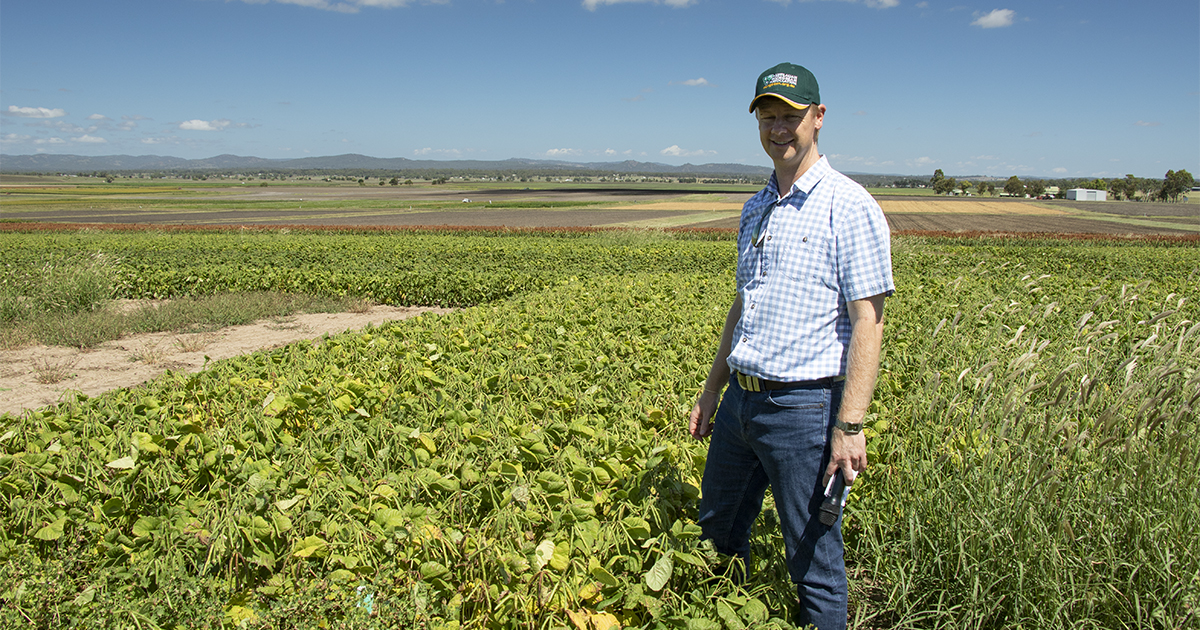 Dr Michael Widderick, is the lead DAF researcher in the mungbean and sorghum crop trials to better understand the agronomic factors that increase the crop’s competitive advantage over feathertop Rhodes grass and awnless barnyard grass.

Various trials in mungbean, soybean and sorghum crops have consistently found that planting these summer crops in competitive configurations can reduce weed biomass and seed production while maintaining or increasing crop yield.

The change in row configuration may involve set up costs to modify planting equipment but does not require an increase in seeding rate as the effect has been demonstrated using the same established populations for mungbean and soybean. For sorghum, the competitive edge comes through increased plant population rather than narrower rows.

Along with narrowing the row spacing in mungbean and soybean, there are also benefits in early weed control. Keeping crops weed-free for the first three to six weeks seems to be a valuable rule of thumb to give crops the head start required to drive down weed numbers. Weeds that germinate in-crop after the 3–6 week mark are fewer in number and individual plants also produce less seed.

As a non-herbicide control tactic, crop competition is very important in any integrated weed management program.

With investment from the GRDC, researchers from NSW Department of Primary Industries, University of Sydney and Queensland Department of Agriculture and Fisheries are conducting trials to identify ways to increase the competitiveness of sorghum and summer pulses.

With only one year of data from this trial so far it is difficult to make recommendations. Average seed head production in non-crop treatments was 1745 heads/m2 for feathertop Rhodes and 1525 heads/m2 for awnless barnyard grass. Growing either crop more than halved the number of weed seed heads produced, even in the least competitive configuration for the two crops.

Row spacing in mungbean had a clear impact on weed seedhead production for both weed species. This effect has been demonstrated numerous times in a range of agronomic trials with mungbean. Narrowing row spacing to 25 cm reduced feathertop Rhodes grass seed heads to 32 plants/m2. For awnless barnyard grass, narrowing row spacing to 50 cm or less reduced seed heads to less than 10 per m2.

Note: this represents one year of data only. 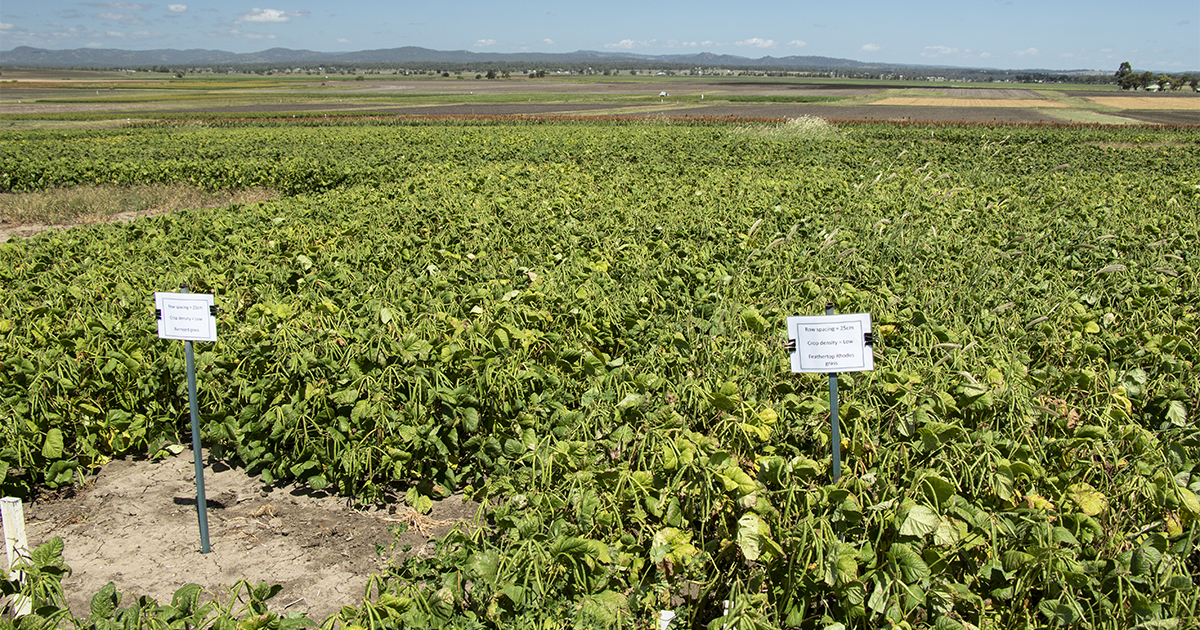 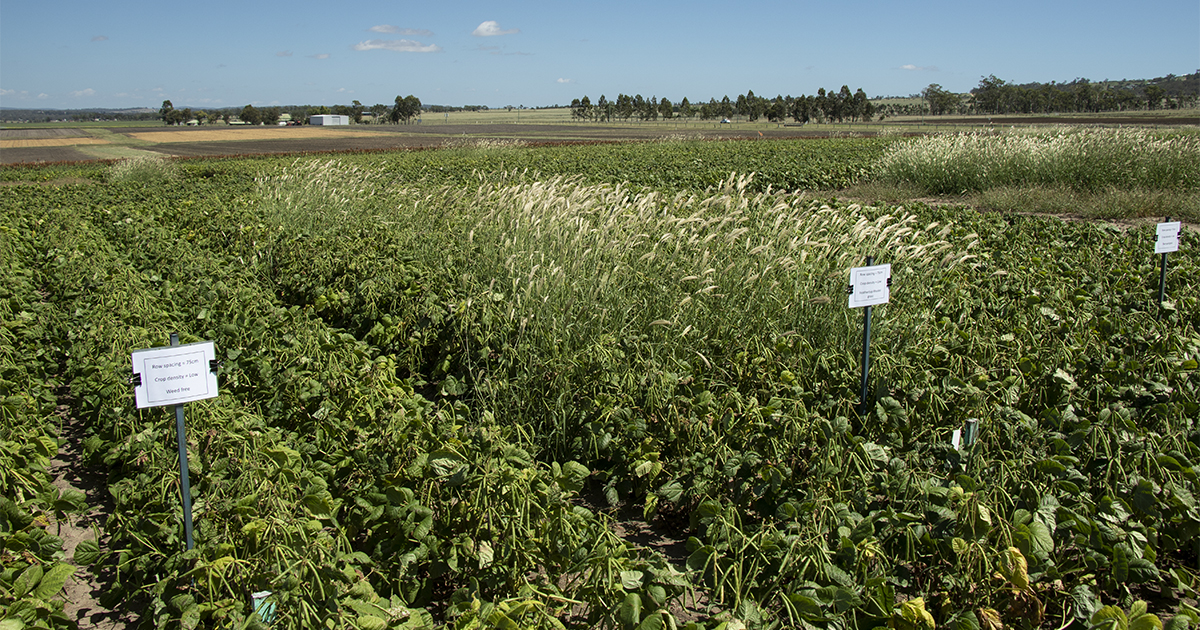 In these plots, mungbean was sown on row spacing 75 cm at low crop density (20 plants/m2). The plot on the left was kept weed free while the centre plot shows limited suppression of feathertop Rhodes grass. Being a low growing weed, the level of infestation of awnless barnyard grass (right) is difficult to see in this photo.

In weed-free plots there was a 20 per cent yield benefit in changing from 75 cm row spacing to 25 cm. This yield difference was 65 per cent in plots where weeds were introduced 6 weeks after planting and a huge 121 per cent higher when the weed infestation occurred three weeks after planting.

Summer crops are an integral part of many farming systems and play an important role in an integrated weed management program. Many summer weeds only remain viable on the soil surface for a period of around 12 months so if a competitive summer crop is followed with a competitive winter crop and harvest weed seed control, there are more opportunities to drive down weed numbers in the soil seed bank.