Stubble management for weeds and yield

For a few years Daniel has been adding components to his system to conserve moisture and keep herbicide resistant weeds at bay.

“A series of drought years got us started down this track of better soil moisture conservation,” he says. “We have been able to store more water than we expected really and this has been converted into better yields.” 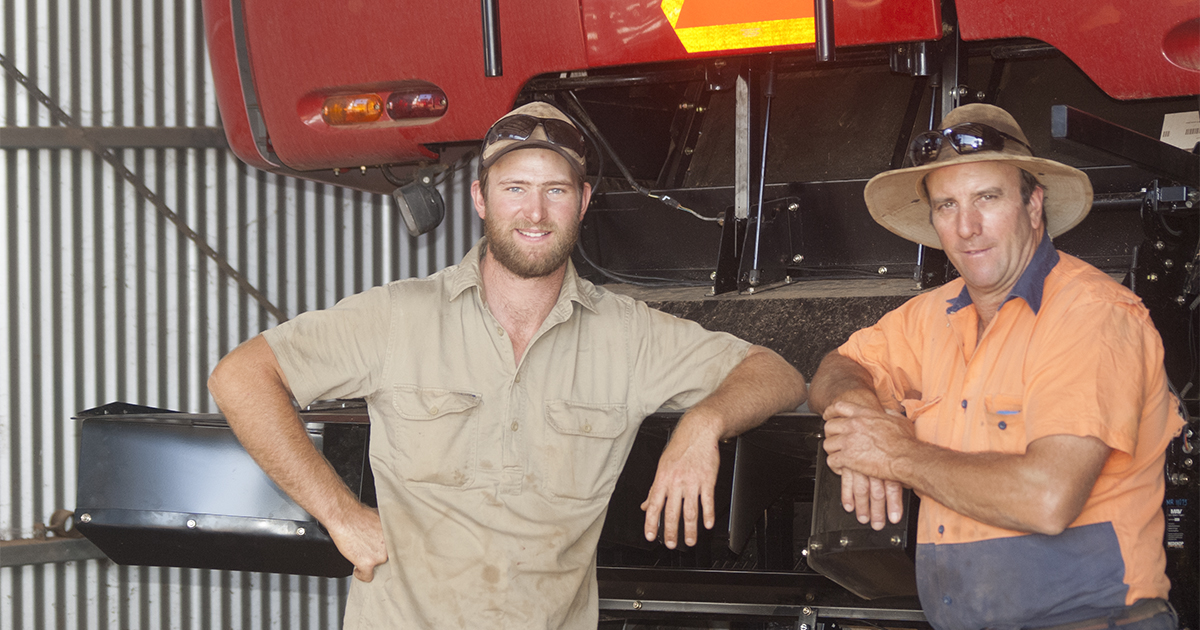 Daniel (left) and David Fox are pleased with the chaff lining chute they have introduced as a harvest weed seed control method on their Marrar farm near Wagga Wagga.

The long-term average rainfall at Marrar, north of Wagga Wagga, NSW is 500 mm and although last year was extraordinarily wet, the 15 years prior to this were relatively dry. This long dry stretch made growers like Daniel and his father David think more about conserving soil moisture over summer and using stubble to protect the soil moisture from evaporation.

As they add more strategies to their management system they are seeing yields rise from an average 2.5 t/ha for wheat to 4 t/ha in years that would have seen the crop suffer due to a lack of spring rainfall.

To tackle increased pressure from annual ryegrass Daniel and David started narrow windrow burning but found that a combination of cutting the crop low at harvest and burning much of the crop residue was impacting on yields. To investigate, they participated in a trial run by Grassroots Agronomy to see if cutting the crop higher, at 30 cm rather than the recommended 15 cm for narrow windrow burning, would still be an effective harvest weed seed control measure.

“The results showed a half-tonne difference between cutting barley low and cutting higher,” he says. “It seems that the taller stubble provides better protection for the soil surface and the trial with the taller stubble had better conserved moisture, which was needed to finish the crop that year, where we had no rain from early September to mid October.”

Highly competitive crops, like this barley, tend to hold annual ryegrass seed heads up high in the canopy where they can be easily collected by the stripper front on the Fox’s harvester.

To maintain the effectiveness of harvest weed seed control Daniel has recently purchased a Shelbourne stripper for the header to collect the grain, and weed seeds, while leaving most of the stubble standing. “Using the stripper we are putting less material through the harvester but still collect grain and weed seed in the crop canopy,” he says. “This means we are picking up yield and reducing the weed seed bank without compromising harvesting efficiency.”

Having used narrow windrow burning for a few years and seeing the benefit of capturing seed from late germinated weeds at harvest, the Foxes have now built a chaff lining chute for the header and are delivering the chaff component, including weed seeds, into a 250 mm chaff line in the middle of the 12 m CTF lap. This maintains most of the crop residue evenly across the paddock and avoids the need for burning. “Having the weed seed concentrated in a narrow band reduces the amount of seed that germinates and also reduces the chance of weed seed being buried and ‘stored’ underground at planting now that we are using a disc seeder,” says Daniel.

Daniel has had no problem sowing through the chaff and is also able to apply more herbicide to the tramlines if the weed numbers appear to be increasing. He is also keeping an eye on the developments of microwave weed control technology as a potential non-herbicide method to treat the tramlines in the future. “We realise that there might be an impact on soil microbes and earthworms but if the microwave is only treating the chaff lines then it could still be a good option,” he says.

Croptopping in non-malting barley, canola and pulses provides an additional opportunity to stop seed set with the chaff lining providing an effective, non-herbicide second knock to support the herbicide.

Daniel Fox has implemented a double break crop system where the cereal stubble is maintained on the soil surface across the 4-year rotation, conserving soil moisture and improving crop yields.

The double break cropping rotation enables Daniel to have a two-year shot at both grass and broadleaf weeds using a combination of herbicide and non-herbicide tactics. “With herbicides we are using robust pre-emergent and in-crop applications and double knocking our knockdown herbicides,” he says. “The non-herbicide tools are collecting weed seed at harvest with the chaff lining chute, strong crop competition from narrow row spacing and haymaking if required. In just three years we have seen a huge reduction in the ryegrass population on the farm.”

During the 2000s David stayed with the canola / wheat rotation they had in place even though it meant that they had a few failed crops, which they converted into silage. “By resisting the temptation to go with a long cereal rotation we avoided the weed blow-out that occurred on some farms,” he says.

The Foxes grow wheat and barley in the cereal phase with an option for oats on their frost-prone paddocks. “Wheat is our mainstay on the higher paddocks where we sow early and the crop flowers in cooler weather, which can make a 2 t/ha difference in yield compared to sowing later,” says Daniel. “We are wanting to raise our average wheat yield from 2.5 t/ha to 3 t/ha, even in lower rainfall and lower radiation years. Likewise, for barley we are confident that significant yield gains are possible in the system we have developed.”

In the broadleaf phase they grow canola and a pulse, usually lupins, and are considering faba bean and lentils as alternative pulse options. They are also investigating whether winter cover crops followed by a summer crop might have a fit in their system to give them the opportunity to use different chemistry at different times of the year to combat weeds.

“No-till and glyphosate generated a big jump in productivity on this farm and now we are seeing another big improvement with new gear such as the chaff lining chute, stripper front and high clearance sprayer,” says Daniel. “We could not have got through last season without the sprayer. It has allowed us to get onto weeds when they are small and cover a big area in the best conditions.”

Doing their own spraying and planting gives Daniel and David the opportunity to monitor their paddocks during the season to keep an eye on weed numbers, which also helps when they go around the farm with their agronomist to plan the weed control program.

A new disc seeder has also made stubble management easier and allowed Daniel to move to 6.5 inch (165 mm) row spacing for all crops. The single disc seeder has 72 units over the 12 m span which, like the sprayer, fits within the controlled traffic system.

Daniel is conscious of brome grass and black oats entering the farm from the roadside so he is spraying through the external fences with a mix of glyphosate and residual herbicide to help minimise the risk of weeds moving into the cropping areas. “We sow right up to the fence to maintain competition and if we need to, we bale the outside lap of the crop,” he says. “After harvest we plough along the fencelines as a firebreak, which is a council requirement.”

The Foxes look for crop traits that provide a competitive edge such as hybrid canola over open-pollinated types and taller wheats such as Spitfire, while still maximising yield and profit from the available moisture. “The 29 year row spacing trial in WA demonstrated that narrow rows produce more crop and less weeds, and we have seen a 400 to 500 kg/ha benefit through less tiller deaths and more heads here too,” says Daniel. “To achieve this it is essential that the soil fertility is able to support the increased production. Our granite soils tend to leach nitrogen in wet years and that has a big impact on yield.”