One of the major benefits to come from hosting research trials is that the results relate exactly to your environment and farming system. Central Queensland farmers, Darren and Tanya Jensen, were able to see for themselves the effect of a one-off tillage event on their otherwise no-till farming system.

With fleabane and feathertop Rhodes grass gaining a firm hold within their 20-year no-till farming system, the Jensens wanted to know if cultivation would be an option to drive down numbers of these hard-to-kill weeds, or whether the damage to soil condition would be too severe. 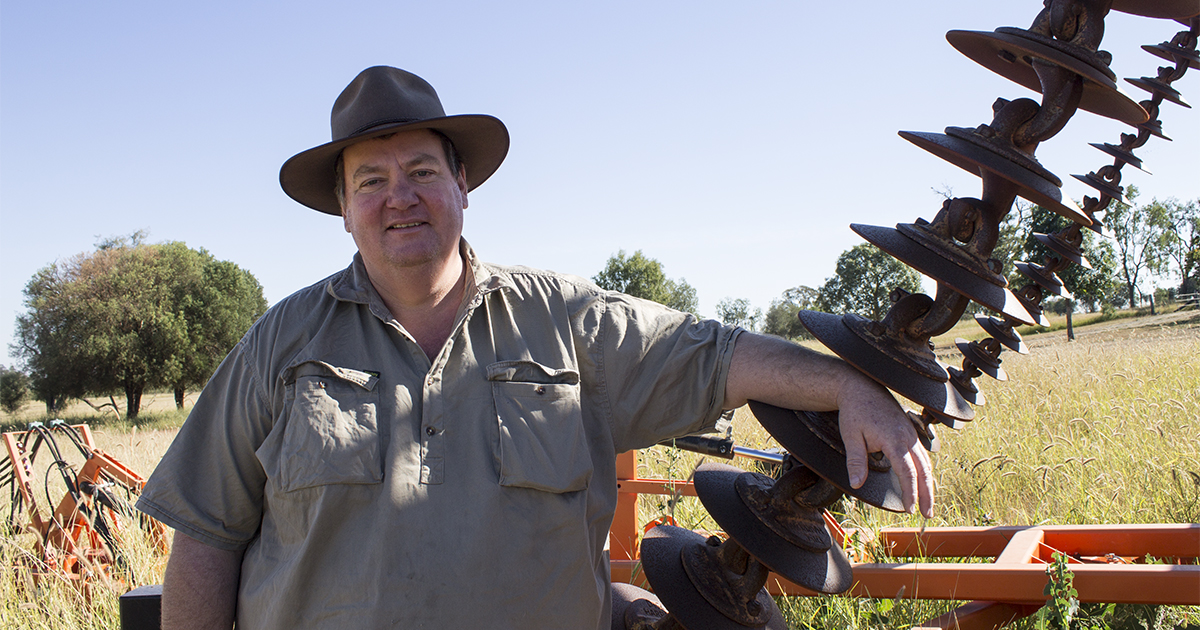 In 2017 Darren used the disc chain across about 40 per cent of the farm, targeting fleabane and feathertop Rhodes grass.

“Yash Dang conducted tillage trials on our property near Biloela in 2012, 2013 and 2014, to investigate the effect of different types of tillage on soil properties,” says Darren. “We watched with interest and were surprised to find out that even the most aggressive tillage operations did not do much damage to the soil.”

This opened up the possibility of using strategic tillage to manage the growing weed problem on ‘Grandview’ and the Jensen’s leased blocks. In 2015 Darren cultivated 1400 ha of their 1750 ha property with two passes of a chisel plough and then followed up in 2016 with one pass of a disc chain.

“This meant we could drop three fallow herbicide applications from the spraying program, saving $84 thousand in chemicals,” says Darren. “In 2017 we used the disc chain again across about 40 per cent of the farm, again targeting fleabane and feathertop Rhodes grass.”

“The last few years we have used cultivation to drive down weed numbers in a fairly intensive way but we would expect that, as time goes on, we will cultivate much smaller areas each year,” he says. “This intensive push has restored about 85 ha of land that had become too weedy for cropping, and lifted profits.”

Having now re-introduced the use of cultivation on an as-need basis, Darren assesses the seasonal conditions in February / March and if there is sufficient moisture he will usually plant a sorghum or mungbean crop and if conditions are too dry to plant he will use the disc chain as part of his fallow management program.

“Straight after harvesting the wheat and chickpea crops we apply a high label rate of glyphosate plus a residual then if there is insufficient moisture to plant a summer crop we apply a second knockdown and use the disc chain to remove any survivors. Wherever possible we will be looking to grow crops rather than weeds.”

The disc chain pulls out fleabane and feathertop Rhodes grass as whole plants and also pulls out sorghum stubble. The machine only cultivates the soil surface and so is a useful tactic against weeds like fleabane and feathertop Rhodes grass that do not persist long on or near the soil surface. Darren says this might not be an effective tactic against weeds like wild turnip, which can persist for much longer if the seed is buried.

“In this environment with summer dominant rainfall we often do not get a ‘spring break’ to provide a fresh flush of young weeds that can be effectively controlled with herbicide. This means that we don’t get many opportunities to do a chemical double knock,” says Darren. “The disc chain removes large plants before they set seed and also stimulates a fresh germination of weeds, which can then be treated with herbicide, after summer rain events.”

Darren has also opted to purchase a Flexi-coil planter with press wheels to give him the option of a light cultivation at seeding if necessary, followed by a field roller, and he will continue to use the zero-till planter in paddocks where the weed numbers are low.

“The moisture loss from the disc chain is not extreme and most crops will need a follow-up rainfall event anyway to get the secondary roots growing,” he says. “The other option is to use the disc chain ahead of the zero till planter. We are doing whatever we can to keep on top of the weeds.”

“Planting with the conventional planter, followed with the roller, allows us to plant chickpeas in weedy paddocks with a pre-emergent herbicide to help with early weed control,” says Darren. “The chickpeas are sown 330 mm apart and the canopy closes over quite quickly, making them our most competitive crop.”

Darren has found that cultivation is a good double-knock partner to help protect his farming system from glyphosate resistant weeds and add more diversity to their weed control program. They are also using more pre-emergent herbicide options to reduce the number of glyphosate applications used across the farm.

“We confine all our herbicide use to the cropped areas of the farm,” he said. “We let native grasses and other vegetation grow on roadsides and contour banks, otherwise feathertop Rhodes can gain a real hold in these areas if competition is removed.”

Research gave the Jensens the confidence to adopt a weed control strategy that they were very hesitant about, and may not have used if they had not seen the evidence for themselves.

As Dr Yash Dang, senior research fellow with University of Queensland says, ‘no-till does not have to mean never-till’.

In a 4-year project with 15 trial sites from Emerald to Dubbo, Dr Dang investigated the effect of a range of tillage implements, used at different times and frequencies, on soil properties.

“We found that neither disc nor tined tillage implements did significant damage to well-structured, high clay content soils such as vertosols,” he says. “However, more aggressive tillage has the potential to redistribute salts in sodosols and tillage at low moisture content may have detrimental effects on the aggregate structure of dermosols.”

The benefits of occasional cultivation in an otherwise no-till farming system included breaking the soil- and stubble-borne disease cycle and redistributing nutrients from the surface layer into the root zone.

“In terms of managing herbicide resistant weeds, or weeds that are inherently hard to kill with herbicide, the infrequent use of cultivation can certainly be considered as a viable option in the northern farming systems,” says Dr Dang. “The main consideration is when to conduct the tillage operation for maximum benefit without sacrificing a planting opportunity.”

A similar trial recently conducted in southern NSW had a similar outcome, adding to the body of research that indicates occasional cultivation does not have a detrimental effect on the soil, provided other precautions are in place to protect the soil from erosion risk.