Feathertop Rhodes grass, with its distinctive seed head, is steadily travelling across the country ­– even being seen along the Eyre Highway crossing the Nullarbor Plain. Agronomo agronomist, Andrew Storrie says prolific seed production and its ability to withstand herbicides makes this weed difficult, but not impossible, to control.

“The key is to concentrate on preventing seed set,” he says. “Feathertop Rhodes grass seed is relatively short-lived in the soil, so with a dedicated approach it is possible to run down the seed bank reasonably quickly.”

“Often the first obvious sign of feathertop Rhodes grass will be a few large plants with the seed head ‘skeletons’ pointing toward the sky,” he says. “FTR grass is moving rapidly along roadsides and most invasions occur from a boundary fence, with seed blown into a paddock. Once on a property it can spread easily on machinery and along irrigation channels.”

Feathertop Rhodes grass is an exotic species that first gained a foothold in the northern grain growing region in response to a shift to low tillage production systems. It is now an emerging weed across the southern and western grains regions of Australia.

“FTR grass is an annual plant that flowers within three to four weeks of germinating and will keep tillering and producing seed while soil moisture is available,” he says. “Not all the seed germinates with the first rain event so there are usually multiple germinations over summer, however most seed in the seed bank is from a single season of seed production rather than accumulating over years.”

Although the light seed is wind dispersed, most seed will fall within five metres of the parent plant, making patch management a viable control option. 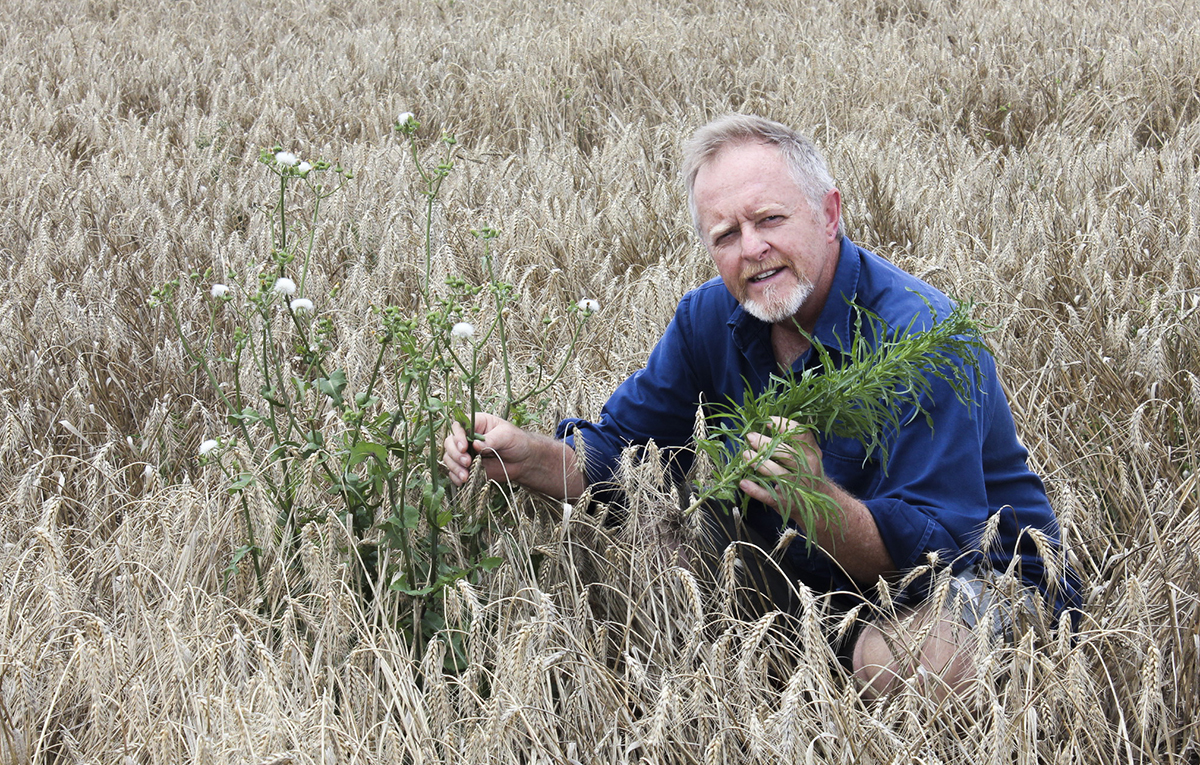 What are the herbicide control options for feathertop Rhodes grass?

Short answer: FTR grass is naturally very tolerant of glyphosate and there are several cases of highly resistant populations. Many growers are using Group A knockdown herbicides but this could be a short-lived option.

Longer answer: Although Group A herbicides are currently an effective control for feathertop Rhodes grass, resistance is inevitable and field observations suggest it could have already occurred in some paddocks.

Group A herbicides are registered for use in various summer and winter broadleaf crops and in fallow ahead of a mungbean crop (Permit 12941). This permit states that a fallow application must be applied to small weeds and followed with paraquat within 10 days.

Group A herbicides are very sensitive to plant stress and, like paraquat, good coverage is essential for reliable results. Given these constraints, it may be prudent to ‘save’ this herbicide for in-crop grass weed control and look for other ways to control FTR grass in summer fallows.

What patch management methods do you recommend?

Longer answer: FTR grass invasion often begins with a few ‘mother’ plants. The plants have shallow root systems and are easy to remove. If this is done before the seed drops, significant costs can be avoided.

Seed buried below a few centimetres of soil will not germinate and most will be non-viable in 12 months, even if another cultivation returned then to the soil surface. Light cultivation of a patch is a very viable option to stimulate germination and allow effective herbicide control of small plants. Under the right conditions fire is also effective to kill the plants and seed on the surface.

Optical spray technology is the only option for treating plants larger than fist size. Permit 11163 provides a range of herbicide options for use with optical sprayers. There are also products from Nufarm and CropCare registered for application with an optical sprayer.

What can I do to control FTR grass that establishes under the crop?

Longer answer: Pre-harvest desiccation will allow earlier harvest, particularly in crops like canola that allow more light in toward the end of the season. This is particularly useful if there has been a blow-out in FTR grass numbers.

An application of paraquat + amitrole soon after an early harvest can provide good control and be followed with a residual herbicide, such as Balance® applied ahead of a chickpea crop, to extend the control into the summer months.

FTR grass is sensitive to crop competition. All efforts to increase crop competition through crop and variety choice, narrower rows and stubble management will suppress FTR grass that might otherwise germinate as the temperature rise above 20 degrees C in spring.