Herbicide resistant weeds might not be widespread in Central Queensland yet, but all the indications are that the problem is flying just under the radar. Following the discovery of the world’s first population of glyphosate resistant sweet summer grass near Emerald, random weed surveys have since confirmed glyphosate resistance in both feathertop Rhodes grass and fleabane samples collected in the region.

Cotton and grain growers and agronomists who want to stay ahead of this mounting threat are invited to attend the 2019 WeedSmart Week event in Emerald. The 2.5-day program will begin with a 1-day forum at the McIndoe Function Centre, Emerald on 13 August. The following day will be filled with a bus tour to farms around Emerald where growers have put in place integrated weed management programs to minimise the impact of herbicide resistance on their businesses. The final part of the program is a half-day tour of the SwarmFarm Robotics base at Gindie on Thursday 15 August. 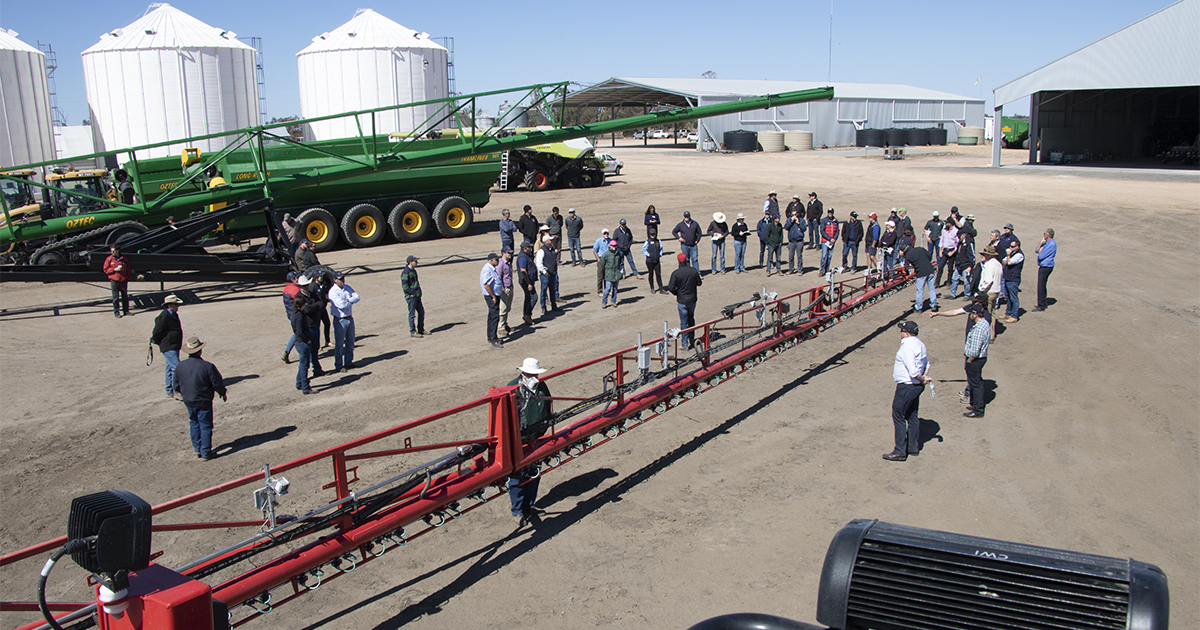 The 2018 WeedSmart bus trip visited Beefwood in northern NSW to check out some of the new weed management technology becoming available to growers.

The WeedSmart Week theme ‘Diversify and Disrupt – Conquer weeds with the Big 6’ says it all! At the forum and on the bus trip growers, agronomists and researchers will have all the options and ideas on the table for discussion.

Ms Vicki Green, GRDC Crop Protection Manager, North is looking forward to attending the event and hopes that CQ growers will make the most of the opportunity to be part of such a focussed and interactive couple of days.

“There is so much pressure on herbicide use in farming systems and growers all over Australia are rising to the challenge to diversify their weed management programs,” she said. “We know the WeedSmart Big 6 principles apply everywhere, but they need to be applied differently in each region and on each farm.”

“That’s where events like this are so valuable – bringing together a vast array of knowledge and experience from local and inter-state growers, researchers, agronomists, consultants and technology experts.”

The value of a day out talking with growers about their weed management strategies – priceless!

In August last year, twelve members of the GRDC CQ Grower Solutions Group attended the 2018 WeedSmart Week in Narrabri as part of a six-day fact-finding tour through southern Queensland and northern NSW.

Brothers Justin and Royce Staier, who farm in the Clermont and Kilcummin areas, were part of the tour group and came away from the experience with some new ideas and a resolve to implement some changes in their farming operations.

Justin was impressed with the calibre of speakers and enthusiasm of the growers on the farm tours. “There are so many people putting a big effort into controlling herbicide resistance,” he said. “We are just starting to see problems with weeds like feathertop Rhodes grass here and going to WeedSmart Week in Narrabri really brought some important things to mind, like the need to stop survivor weeds and to be careful with residual herbicide use. Machinery hygiene is an on-going risk for spreading herbicide resistance and this is a high priority for us.”

At this year’s event, attendees will have several opportunities to see and discuss cutting-edge technologies such as optical sprayers, robots and emerging ‘green-on-green’ spray sensors, and will have the opportunity to find out how other growers in the region are implementing the Big 6 weed management tactics.

The growers, agronomists and researchers speaking and participating in expert panels at the Day 1 forum will spark important discussions about herbicide resistance and how the Big 6 tactics can be used to target the weed species and farming systems in the northern cropping region. There’s one thing for sure – doing nothing is not an option.

Register for this important 3-day event for the ‘early bird’ single ticket price of $130, guaranteeing a seat on both the bus tour days as well as the forum, all fully catered.