Do canola biotypes have allelopathic effects on weeds?

Allelopathic traits were never important in plant breeding in the past because there was a suite of herbicides available to control weeds. Now, with high levels of herbicide resistance, around the world there is a renewed focus on allelopathic effects in several crops, including wheat, rice and canola.

Canola plants have varying abilities to interfere with the germination and growth of other nearby plants, including weeds. This interference is usually a combination of allelopathy and competition. Determining which canola varieties carry the genetic capability to produce allelopathic substances that suppress important weeds is of great interest to Charles Sturt University (CSU) research professor, Jim Pratley and his team.

“Modern plant breeding programs assess the productivity and other traits of a new hybrid in a weed-free environment,” says Professor Pratley. “This means that genotypes that have allelopathic capability do not have an opportunity to demonstrate their value to a real-world farming system where weed pressure is an inevitable part of plant production.”

Research at CSU has focused on screening canola genotypes for their effectiveness in controlling ryegrass and found that some varieties in the current genotype collection provide good non-herbicide control over the target weed, annual ryegrass, and a number of other species such as shepherd’s purse, Paterson’s curse and brassica weeds like wild turnip.

“More non-herbicide tools are required to help manage herbicide resistant weeds,” he says. “Crops that can be sown into weedy paddocks and that can suppress weed seed germination using allelopathy or reduce the number of weeds setting seed through crop competition offer a useful tool for growers.” 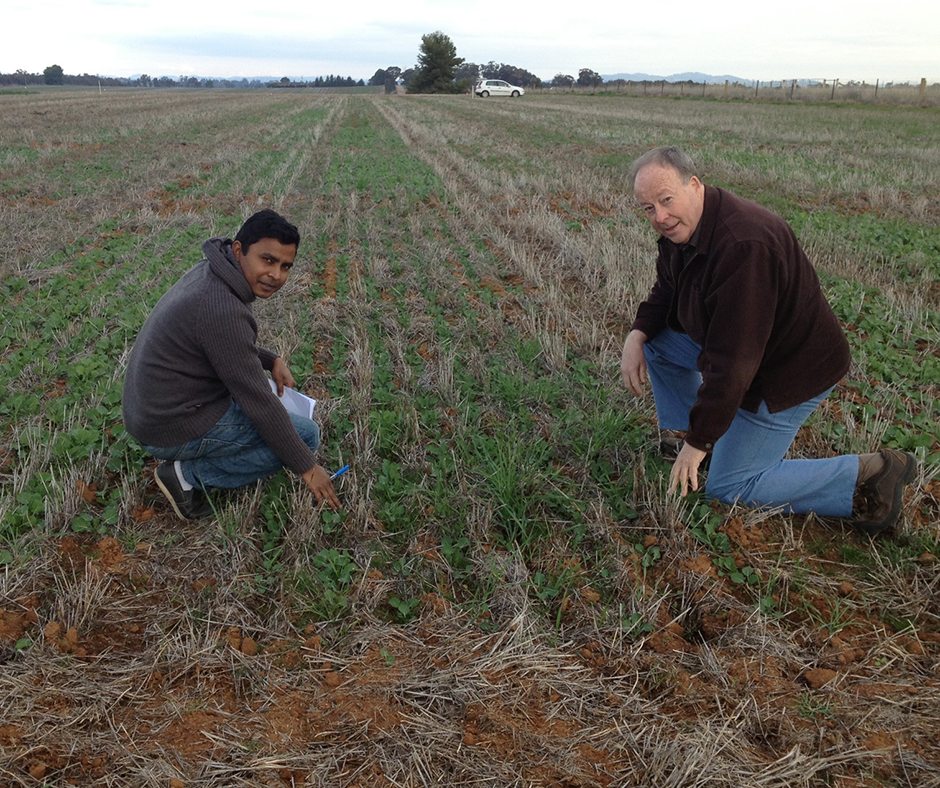 How do you identify the difference between allelopathy and competitiveness in a hybrid?

Short answer: It can’t be done in the field. This is for the lab only.

Longer answer: In the laboratory, the canola plants are grown in agar, in a weed-free environment for one week. Then the target weed seed is introduced and the development of the weed root system is monitored. The plants do not need to compete for light, nutrients or water so any suppression of root development can be ascribed to the herbicidal effect of the substances that the canola plants have exuded into the agar.

Can a variety be both competitive and allelopathic to weeds?

Short answer: Yes, but not always.

Longer answer: Once the allelopathic capability of a variety is established, researchers grow the variety in the field with no herbicides applied to control weeds. Any additional weed control that is achieved in the field can be ascribed to the ability of the hybrid to out-compete the weeds present for light, nutrients and water resources.

The team at CSU have screened half of the available canola genotypes to rank them according to their ability to contribute the genes required to produce the allelopathic substances to suppress annual ryegrass and other key weed species.

Is canola the only crop that has allelopathic potential?

Short answer: No. Researchers around the world are also finding wheat and rice cultivars vary in their allelopathic capability. In other countries, this information is being actively pursued in the respective plant breeding programs. Research in this field in Australia is sadly lagging behind.

Longer answer: Work in the area of allelopathy is not new but it has not featured as a high priority trait in plant breeding programs in modern agriculture, particularly since herbicides have been widely used in cropping systems. Many older varieties and cultivars have much stronger allelopathic ability than modern ones. This trait can be re-introduced into high performance varieties and hybrids using either traditional plant breeding methods or gene transfer. Keep in mind that weeds also have allelopathic capability and are not afraid to use it.