Spray droplet size plays a critical role in maximising herbicide contact on the weed surface. Some applicators have been concerned that the move to coarser nozzles to reduce spray drift could reduce the efficacy of non-selective and phenoxy herbicides used for summer weed control.

“Droplets less than 100 microns in diameter only have enough inertia to travel approximately 34 cm downwards after exiting the nozzle. As a result, even when the boom is set correctly at 50 cm above the target, these droplets will not hit the mark and will often be suspended in the air with the potential to drift off-site,” André says. “Conversely, droplets over 720 microns are likely to bounce off the leaf surface or run off vertical surfaces.”

“For an effective spray application, the product must hit the target and be held on the plant surface long enough to be absorbed,” he says. “If this doesn’t happen due to poor application techniques, such as low water rates or excessive ground speed, the investment in product and application is potentially wasted.”

‘Spray well – correct nozzles, adjuvants and water rate’ is WeedSmart Wisdom to reduce the risk of low-dose applications that can contribute to herbicide resistance in weeds.

Why is boom height and ground speed so important for spray-drift risk?

In brief: The correct height is 50 cm above the target. This is deceptively low!

From an elevated position in the tractor cab, it is difficult to judge the height of the boom, which will appear closer to the ground than it is. 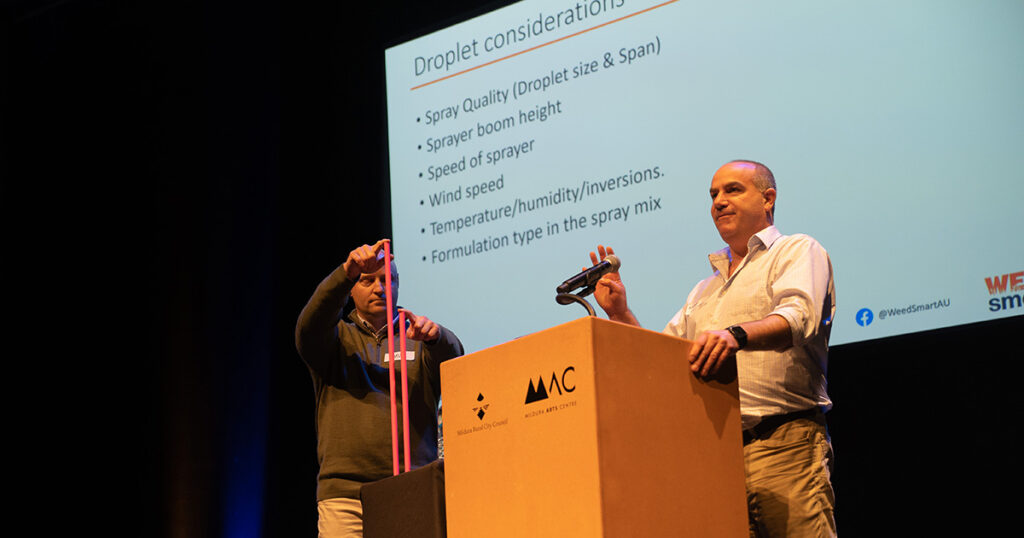 David Keetch (left) and Andre Sebeeney, Nufarm demonstrate the impact of boom height on the production of driftable fines when spraying.

Another essential consideration is ground speed. At 15 km/hr, most droplets are likely to hit the target. If the spray rig travels at over 20 km/hr, a larger percentage of droplets will not hit the target. Higher ground speed can interrupt fan angles and produce turbulent effects behind the machine. Getting over the farm quickly loses its benefit if a considerable percentage of the product is not hitting the target.

How can I maximise herbicide efficacy in summer?

In brief: Summer spraying conditions are rarely ideal. Decisions must consider the weed type and size, plant stress and environmental conditions at the time of spraying.

The details: Droplets at the larger end of the preferred range are more efficacious when the spray conditions are less than ideal. The herbicidal effect is better because the droplets are less susceptible to evaporation and can ‘survive’ for longer on the plant surface.

When choosing nozzles, ask about the volume mean diameter, or VMD, of different brands and nozzle types. Within each classification, there is a wide variety in droplet size distribution. Nozzles that can produce a Very Coarse (or coarser) spray quality are ideal for spraying weeds over summer.

Droplet size influences various factors that can result in low dosing of herbicide. Low dosing is a real risk in summer weed control that can contribute to the evolution of herbicide resistance.

What does the new formulation technology offer?

Around the world, companies are working on several droplet-altering technologies. Nufarm has developed a new formulation technology for 2,4-D amine herbicides that ensures 96 per cent of the spray droplets are within the optimal range of 150 to 720 microns. This is a 16 per cent improvement on the droplet size distribution of current 2,4-D Amine herbicide formulations, enhancing herbicide efficacy and on-farm efficiency.