Does chaff in a chaff line suppress weeds?

In the wake of rapid adoption of chaff lining, the newest harvest weed seed control tool developed by Australian farmers, a substantial research effort has been made to validate the efficacy of this practice.

Chaff lining involves depositing weed seed-laden chaff in a narrow line behind the header. Some growers using this practice have suggested that as the chaff in the chaff line rots away, much of the weed seed also decays in the process. Researchers working across the northern grains region have now gained a deeper understanding of what happens to weed seed in a chaff line.

Department of Agriculture and Fisheries, Queensland weeds researcher Dr Annie Ruttledge and several collaborating scientists have been looking into different aspects of weed seed decay and weed suppression in the chaff line.

“Non-herbicide tools like chaff lining are very important to help manage the onset and spread of herbicide resistance in weeds,” says Dr Ruttledge. “The idea with harvest weed seed control tactics is to collect any weed seed present at harvest height, usually above 15 cm. With chaff lining, these weed seeds are deposited in a narrow line of chaff behind the harvester.”

“Burial in the chaff line can suppress emergence in some weed species, but it does not guarantee that no weeds will emerge from chaff lines,” she says. “Harvest weed seed control tools like chaff lining and chaff tramlining concentrate the weed seed into confined zones where emergence can be monitored and action taken as required, without treating the whole paddock.” 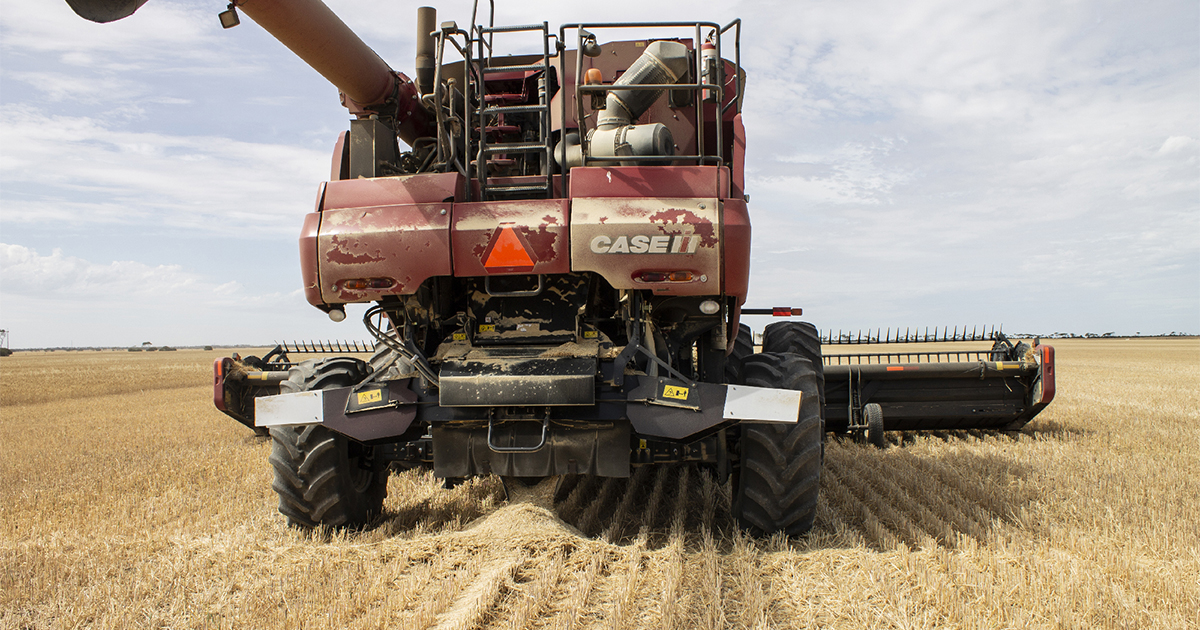 Chaff lining (and chaff tramlining) deposit weed-laden chaff in a narrow line behind the harvester or directed onto the tramlines.

Short answer: Yes, if the weed seed is buried deeply enough in the chaff. Many weeds in no-till and reduced-till farming systems prefer to germinate on the surface where there is plenty of light.

Work done by our collaborator Dr John Broster, CSU found that chaff from cereal crops generally provided better suppression of annual ryegrass compared to canola and pulse chaff. For all chaff types the higher the rate per hectare the better the suppression.

One of the experiments involved determining the level of chaff required to effectively suppress emergence of annual ryegrass and common sowthistle.

What’s the difference in suppression in chaff lines compared to chaff tramlines?

Short answer: Chaff tramlining effectively halves the amount of chaff in each line, potentially reducing the suppressive potential of the chaff.

Longer answer: Placing a single line of chaff behind the harvester (or directing all the chaff from a chaff deck into one tramline) maximises the amount of chaff and therefore the level of weed suppression. Different crop types, sowing rates and crop yield all influence the quantity of chaff produced.

In addition to looking at suppression of emergence, we looked at weed seed decay under field conditions. In these trials there was no evidence that weed seeds rotted more rapidly in a chaff line than on the soil surface. However, we expect that environmental conditions play a large part in weed seed decay so the results could vary according to season, with more rotting likely in a wet year than in a dry year. The depth and persistence of chaff cover and the type of weed species are other factors that would influence seed persistence in chaff lines or chaff tramlines.

Harvest weed seed control tactics aim to collect weed seed at harvest and concentrate it in a small zone where weeds can be targeted at a fraction of the cost of whole-paddock treatments.

What are the options for treating the weeds in the chaff line or tramlines?

Short answer: Farmers are leading the way with practical solutions to manage weeds along chaff lines and chaff tramlines.

Longer answer: Some growers use an optical sprayer or a boom with nozzles only operating on the chaff line or tramlines to apply a mix of herbicides that may be too expensive to apply to the entire paddock. Weed seed that is collect at harvest and placed in the chaff line, may have survived in-crop herbicide applications and may be herbicide resistant. Susceptibility testing can help identify herbicides that can provide effective control.

Non-herbicide options are to wait for germination and chip or trample the weeds. In a mixed farming operation, sheep can graze the chaff lines rendering most of the weed seed unviable, and the sheep will benefit from an additional feed source.

Growers who have been using chaff lining and chaff tramlining for several years report that the high concentration of weed seed leads to a high level of competition between the weeds and this is compounded with competition from the following crop. Over time, seed set reduces and any weed seed produced will be collected and returned to the chaff line the following year. When chaff is deposited on the wheeltracks, weeds that emerge face dry, compacted conditions and are often subject to frequent passes with heavy machinery.

This chaff tramline was sprayed out using a shielded sprayer.

Does it matter if I use a draper or a stripper front?

Short answer: No, not in terms of amount of weed seed harvested, provided you set up and operate with weed seed collection in mind.

Longer answer: Our collaborators Dr John Broster, Dr Michael Walsh and Annie Rayner conducted trials with stripper and draper fronts at two trial sites. The results at one site showed that it is possible to achieve the same level of weed seed collection with the two harvester front options. At the other trial site, the stripper front was not as effective as a result of wider row spacing, higher operating height and faster operating speed compared to the draper front at the same site. The key to success with chaff-only harvest weed seed tools is getting the weed seed in the front and effectively separating the weed seed and chaff from the straw component. The WeedSmart website provides practical information about setting up different harvesters and operating them for effective harvest weed seed control.

Bear in mind that a stripper front will generate a lot less chaff than a cutter type front, and so this is likely to influence weed suppression and the rate of weed seed decay.