Double down on the double break in the high rainfall zone

In high rainfall zones it can be easier to overlook the impact of weeds like annual ryegrass, as the effect on crop yield is often less visually dramatic than in lower rainfall zones.

Through a long-term trial at Lake Bolac, Victoria, researchers at The University of Adelaide and Southern Farming Systems set out to quantify the impact ryegrass has on crop yield, and the integrated weed management strategies that can be used to control this competitive weed in high rainfall zone cropping systems. 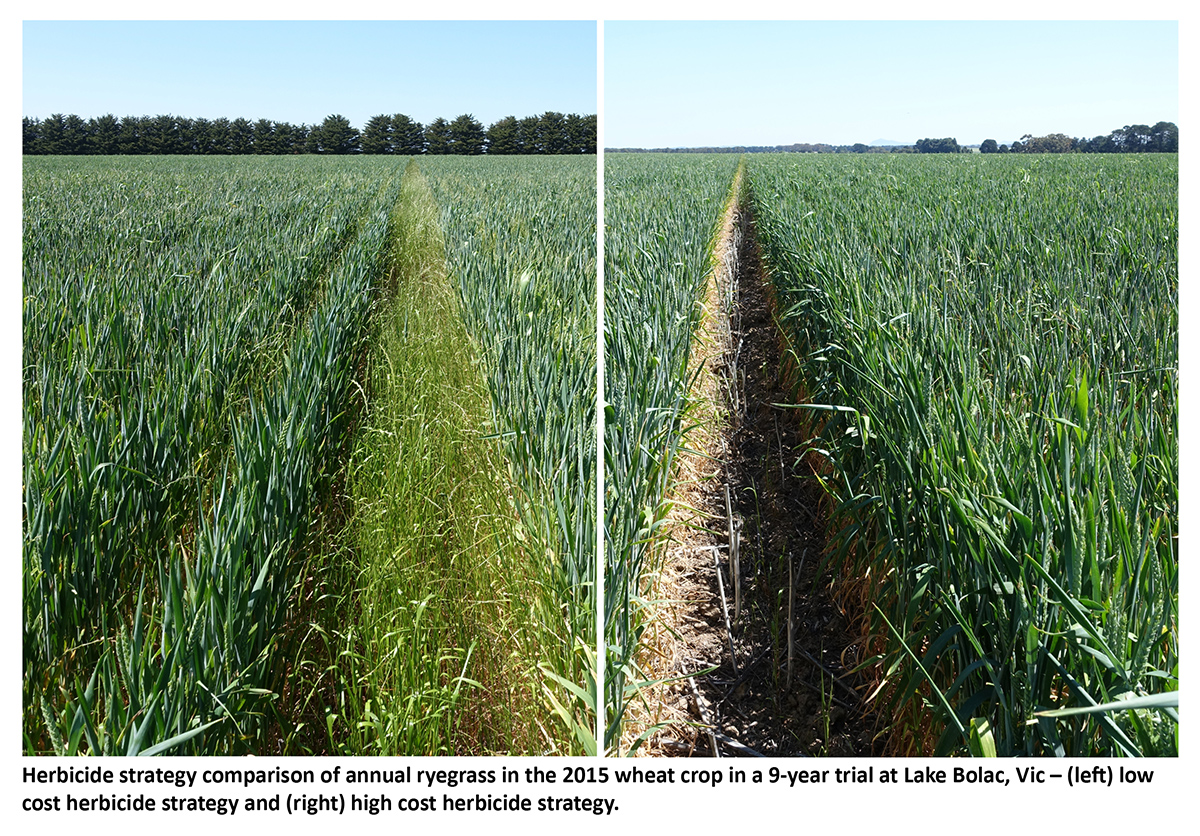 The high rainfall zones present serious challenges to weed control and particularly to pre-emergent herbicides. The combination of long seasons, high rainfall and waterlogging, high weed density and herbicide resistance can compromise the efficacy of these herbicides.

Consequently, growers need to devise long-term, integrated weed management strategies such as the WeedSmart Big 6, to keep ahead of aggressive weeds like annual ryegrass.

A unique, 9-year integrated weed management trial was conducted at Lake Bolac from 2012 to 2020 to investigate the effects of cultural and herbicide control strategies across a rotation on annual ryegrass populations in a high rainfall environment.

Three herbicide strategies were then applied to 20 m wide by 60 m long sub-plots (not randomised) for the nine-year duration of the trial. The herbicide programs differed in cost (‘low cost’, ‘medium cost’, ‘high cost’ being $39/ha/yr, $56/ha/yr, $89/ha/yr respectively) and varied according to the crop grown across the whole site each year. There were four replicates of each treatment.

The crop rotation at the field site started with wheat (2012) then barley, RT canola, wheat, faba beans, TT canola, wheat, TT canola and finally wheat in 2020. The double break in 2016 and 2017 was done in response to a blow-out in the ryegrass population.

In the last two years of the trial, the research team included a crop competition treatment through a sub-optimal canola plant density of 20 plants/m2 compared to the optimal density for hybrid TT canola of 45 plants/m2, applied across the three herbicide treatments. Similarly, in 2020, the wheat crop was sown to achieve plant densities of 150 plants/m2 and 200 plants/m2, in plots matched to the 2019 canola sowing treatments.

The mouldboard plough operation reduced establishment of annual ryegrass by more than 95% in the year that it was implemented. After two years, there was no difference in annual ryegrass populations between the pre-sowing cultural treatments and so the yield and weed seed data were averaged across the pre-sowing cultural treatments to focus on the effect of the three herbicide regimes.

In the early years of the trial (2012 to 2016), annual ryegrass seed head numbers increased under all three herbicide regimes, although the more intensive (high cost) management did suppress weed seed head numbers more than the medium and low cost strategies.

In the high rainfall zone, the long growing season challenges pre-emergent and post-emergent herbicides to provide season-long annual ryegrass control in cereals. Consequently, weed populations increase over time unless strategies that stop weed seed set are used in the integrated weed management program. Such tactics include harvest weed seed control, cutting for hay and crop-topping in break crops. The long growing season often results in greater weed seed shedding before harvest so tactics such as windrowing can bring harvest forward and maximise the benefit of harvest weed seed control.

The research team decided to implement a double break tactic at the site, sowing TT canola in 2017 after the faba bean crop. The ryegrass population was much reduced as a result of the double break, with the weed seed head numbers in the low-cost herbicide treatment reduced from 2399 to 35 heads/m2 by the end of 2017. The effect of the double break persisted after 2017, showing that it had degraded the weed seedbank significantly. 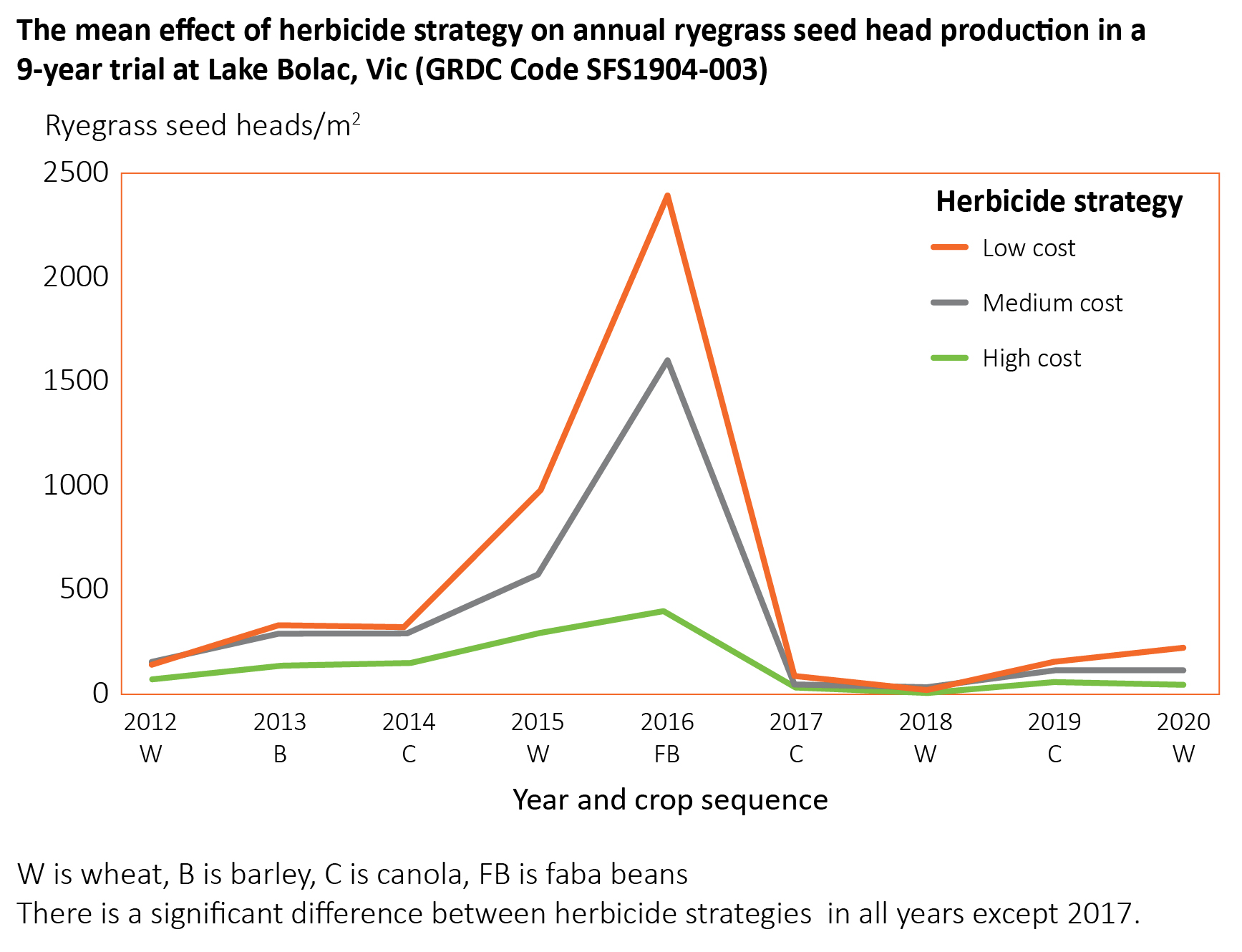 Investing in herbicide mixtures pays off

The effect of crop competition was measured in low and high seeding rate plots within the trial in 2019 (TT canola) and in 2020 (wheat). The lower plant density treatment in the 2019 TT canola crop resulted in an average yield reduction of 0.4 t/ha and higher annual ryegrass seed head production across the three herbicide strategies. The medium and high cost herbicide strategies in the 2020 wheat crop were able to maintain the lower weed numbers achieved in the canola crop.

This research was conducted by researchers at The University of Adelaide (a WeedSmart scientific partner) and Southern Farming Systems, with investment from the GRDC, a WeedSmart platinum sponsor. Neil and Graham Vallance hosted the 9-year trial at Lake Bolac site, and the unique dataset is available to the industry thanks to their remarkably faithful collaboration.