2020 mini update – Sam and Emily Eagle have introduced sheep containment yards to their operation as a means of managing weeds and optimising pasture and fodder crop production. They use sheep to graze paddocks sown to Moby barley and clover, then double knock, to make money from their cover and brown manure crops.

Having used narrow windrow burning in canola for six years, Sam and Emily invested in a seed impact mill in 2018 as their harvest weed seed control tool. They spray-top their legumes, make hay and silage for on-farm use and their contract windrower sprays canola under the cutter bar, all to stop weed seed set.

The Eagles continue to use herbicide resistance testing to better inform their herbicide choices and use multiple chemical groups in a broad rotation.

Watch Sam’s presentation at the Horsham WeedSmart Week forum in 2019.

Sam and Emily Eagle run 2500 merino ewes on their 3000 ha mixed farm near Horsham, Victoria. They say the livestock and cropping activities complement each other, keeping their pastures and crops performing at their best.

Herbicide resistant annual ryegrass is their main weed challenge with one test revealing resistance to glyphosate (65 per cent) and clethodim (80 per cent), and full susceptibility to chlorsulfuron (Group B, Glean). 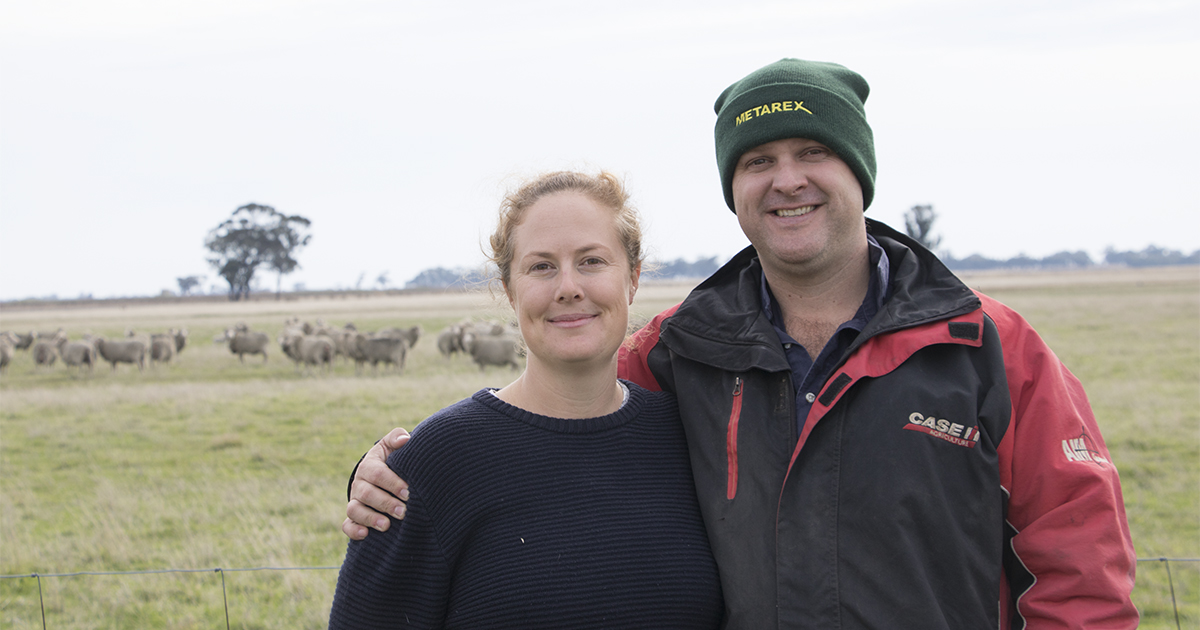 Sam and Emily Eagle run a mixed farming enterprise near Horsham, Victoria where grazing and cropping are mutually beneficial for weed management.

“We test annual ryegrass from two or three paddocks each year to monitor any changes in susceptibility to the herbicides we use,” said Sam. “Knowing which herbicides are effective makes it easier to plan our herbicide use without relying solely on the products that still work. Every year we have at least one tactic in place specifically to reduce the weed seed bank.”

Knowing that the tested weeds were susceptible to Glean gave Sam an opportunity to regain control of a potential blow-out situation, using a herbicide that is much cheaper than alternatives that he might have chosen if he had to make the decision without the herbicide resistance test results.

The Eagle’s agronomist usually collects the seed for testing and the results are considered to be representative of the whole paddock, each one being around 35 to 70 ha.

“We can fairly safely assume that all our weeds have some level of resistance so we concentrate on managing survivors, mostly treating with a double-knock whenever possible,” he said. “Annual ryegrass is our main problem weed however we are keeping a close eye on brome grass that is present on one of our lease blocks.”

Triazine resistance on one block precludes the use of TT canola so the Eagles grow conventional canola on this block, aiming for the most competitive, highest yielding crop possible.

Along fence lines Sam uses a 2-year program where he slashes in spring in one year and then sprays a knockdown + residual herbicide mix the next year. “When we slash, we know that the weeds will still set seed. We keep the slasher low to the ground to ensure any seed heads present at harvest are below header height so they won’t get spread,” said Sam.

The pasture paddocks are de-stocked over summer with the sheep grazing on the stubble. If the stubble runs out early the sheep are returned to the containment area where they are fed screenings, hay and grain until the pastures are ready. The ewes return to the pastures to lamb in autumn.

Sam and Emily use narrow windrow burning in the canola as their harvest weed seed control tool. They have had trouble using this tactic in cereals, where the fires often don’t burn right to the ground, leaving weed seed concentrated in bands. On the other hand, the canola burns well, destroying the weed seed, and Sam is able to safely burn several paddocks on the one day. Grazing the canola narrow windrows has not caused any problems with burning or with weed seed being spread. 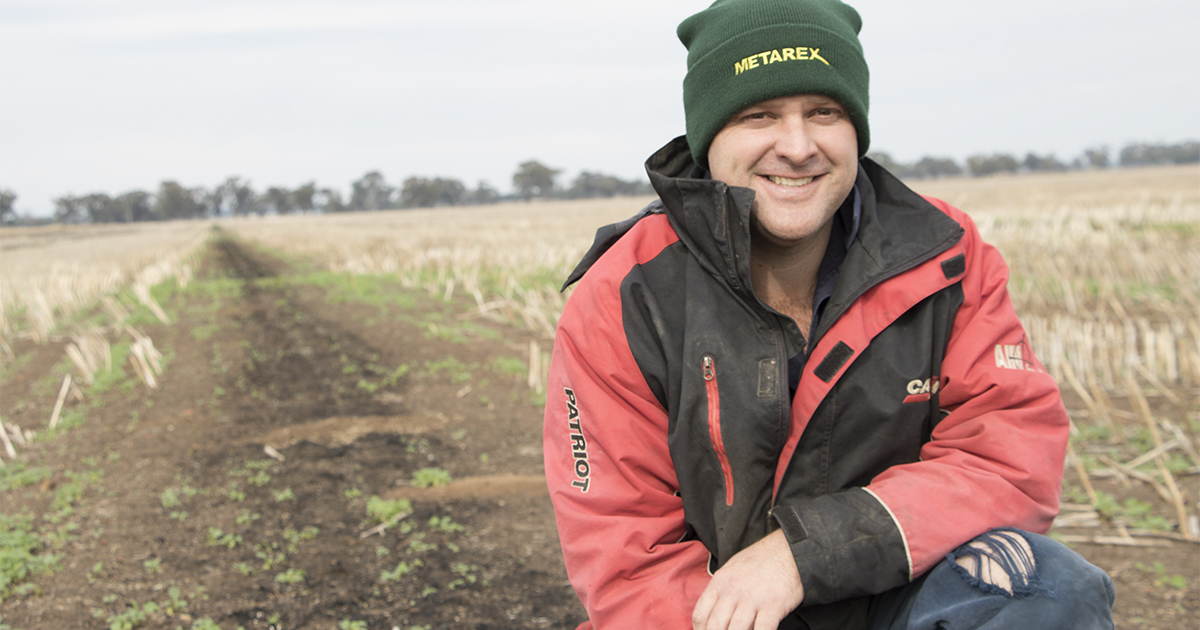 “Canola actually gives us a few opportunities to control late germinating weeds,” said Sam. “Firstly with an over the top spray to desiccate the crop, secondly windrowing the crop early and third, using the narrow windrow chute at harvest in preparation for narrow windrow burning in autumn. We also spray top wheat and barley, with the sheep providing the second knock for any survivor weeds.”

Growing faba beans, canola, wheat and malt barley enables them to use a different pre-emergent herbicide each year of the rotation. At the end of this 4-year program any paddocks that are carrying a weed burden are thoroughly cleaned using a pasture and a 3-year hay program. Moby forage barley sown with clover gives a nutrient boost to the perennial ryegrass pasture phase, which may last up to ten years.

“We supply hay for export and generally grow two oat crops and one vetch,” said Sam. “Any failed crops or additional production is stored as silage in underground pits to drought-proof our breeding flock. Silage is a particularly good way to clean up weeds because we spray out when the crop is actively growing and not under any moisture or heat stress, then cut in early September.” 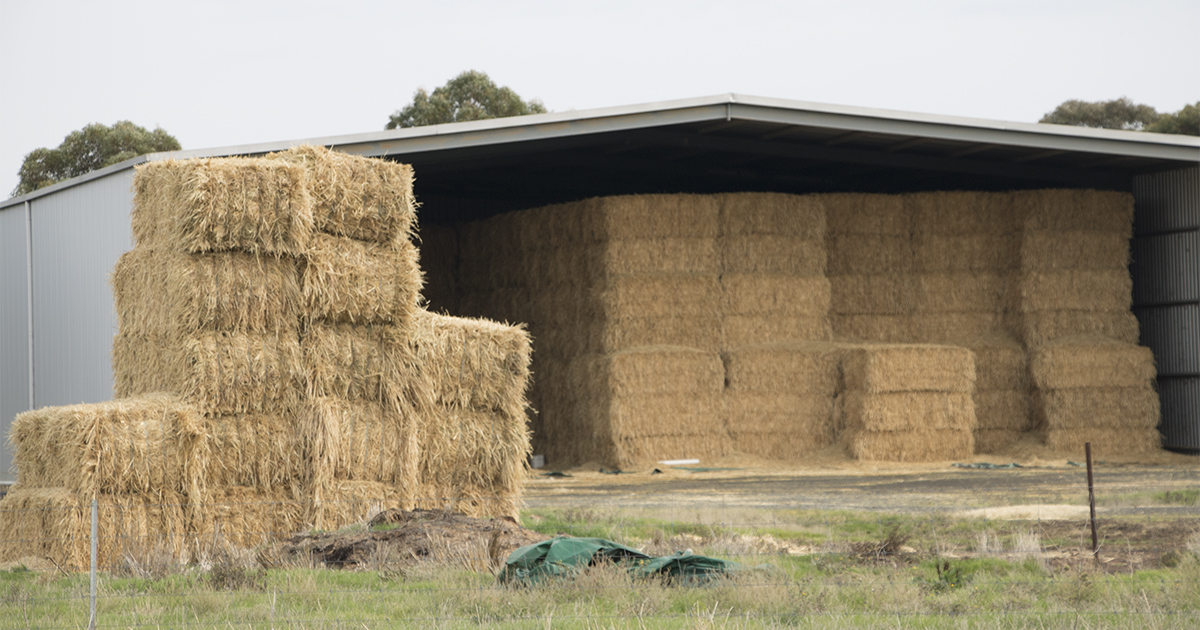 At the end of a 4-year cropping program any paddocks that are carrying a weed burden are thoroughly cleaned using a pasture and a 3-year hay program. The Eagles supply hay for export and generally grow two oat crops and one vetch.

The 2017 seeding represents the beginning of the Eagles’ fully aligned controlled traffic farming (CTF) system. The transition to 12 m wide CTF has taken several years but Sam and Emily are convinced that the efficiencies gained will be well worth the investment.

They sow all crops on 300 mm row spacing and aim to achieve the most competitive crops possible. Although Sam knows 380 mm row spacing would make some management operations easier, they pick up extra yield and suppress weeds with the narrower spacing.

In the seven years that Sam and Emily have been managing the farms they have seen the benefits of the rotation in keeping weed numbers low. “All of our worst paddocks have now had the ‘rotation treatment’ and we have avoided weed blow-outs,” said Sam. “Two wet years in a row could potentially challenge our weed management but having the sheep in the system gives us more options while still earning income from each paddock.”