Farming on the sand hill swales near Port Broughton on the Yorke Peninsula, Pete Edwards is doing everything in his power to stop herbicide resistance in brome grass and wild radish.

“We take a zero tolerance approach to escapes, particularly with brome grass, and have used a chemical fallow in areas with high brome numbers,” he says. “It’s a case of ‘short term pain for long term gain’ and even after a chemical fallow we will chase any survivors by hand rouging or spot sprayer. Keeping on top of brome survivors has certainly paid off and we have seen numbers decline.” 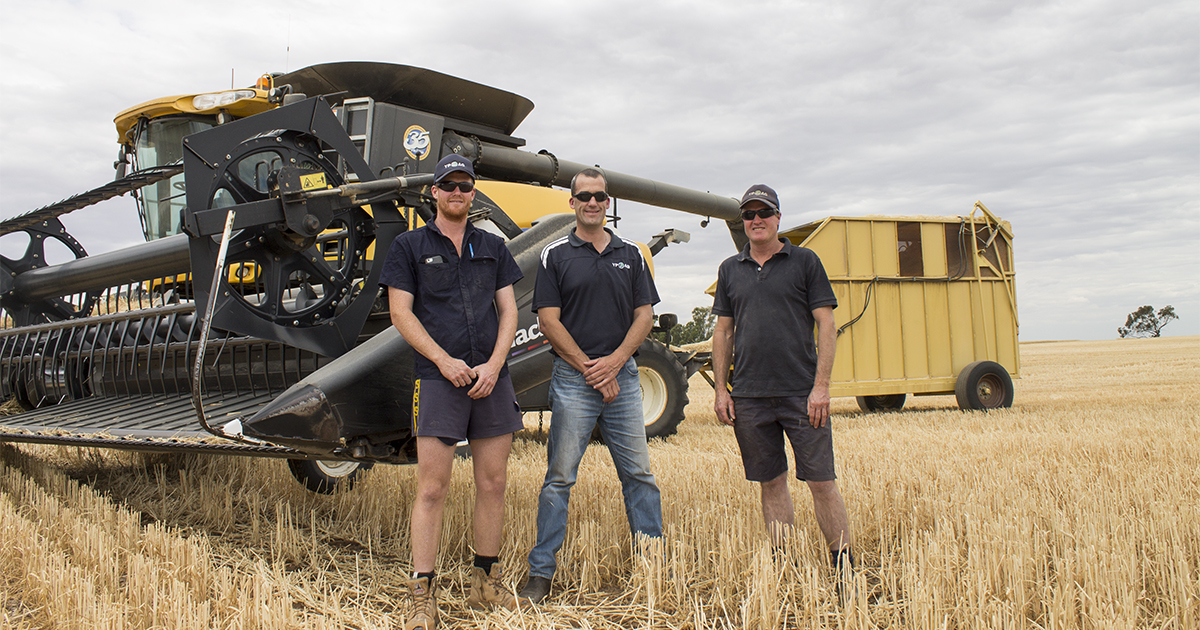 L-R: Tim Edwards, Chris Davey (YP-AG) and Peter Edwards. Chaff carts have served a purpose but their time on the Edwards’ farm is limited and this harvest they will most likely introduce a chaff deck system to replace the chaff cart.

In wheat Pete has had good results with non-imi chemicals such as Avadex + Sakura and Avadex + Boxer Gold, in conjunction with narrow windrow burning, which helps manage the stubble and maximises the efficacy of these more expensive herbicides.

“There are very few options for wheat so it is essential that we keep pressure on brome numbers in our other crops and also give the group B herbicides a rest to help preserve the imi-tolerant crop options,” he says. “We are only a few applications away from serious resistance issues with fop and dim chemistry. When patches of weeds are not killed by our normal herbicide applications we go back and apply high rates of clethodim to achieve 95 per cent kill, and then go back again to hand rogue any survivors.”

Pete is also mixing fops and dims such as Select, Verdict and Factor and the Intervix brew to extend the life of these modes of action. He has seen the value of including adjuvants such as Supercharge for Factor and ammonium sulfate to maximise the impact on hard-to-kill brome grass.

The Edwards have installed a digital weather station on their farm that also provides local data to ten other growers who subscribe to access the data. Having access to local, real-time weather information, including automated Delta T calculations, means that Pete and his neighbours can avoid frosty and dewy conditions and minimise spray drift, making every application as effective as possible.

When collecting seed for herbicide testing Pete looks specifically for plants that are stunted or deformed as they are likely to be indicator individuals of what might be happening in the paddock and the results help him to plan ahead with chemical choices.

The Edwards family have used chaff carts for 12 years and through extensive testing have proven that operating at a slower speed really does capture more weed seed. Rather than dropping small chaff piles across the paddocks the Edwards build large chaff dumps about 200 m apart.

Pete has designed a narrow windrow chaff management system of his own that drops the straw on the ground and places the chaff on top to give a good hot burn to destroy the weed seed, even if the windrows get wet.

The main disadvantage of narrow windrow burning is that it removes all the crop residue. Chaff carts remove between 10 and 25 per cent of the crop residue but the rest is spread on the paddock and has a dual benefit of suppressing weeds and conserving moisture. Pete says the extra soil moisture can save a crop germination in a year with a dry start. Even so, nothing can replace narrow windrow burning completely in very high weed pressure situations so Pete will continue to use his modified narrow windrowing chute when necessary.

Chaff carts have served a purpose but their time on the farm is limited and this harvest they will most likely introduce a chaff deck system to replace the chaff cart. Pete sees some advantages of the chaff deck system over chaff lining, such as less dust off the wheel tracks during spray applications and not having any piles of chaff impeding sowing.

Pete reckons the iHSD will revolutionise harvest and weed seed control and thinks there could be opportunities for contractors to invest in iHSD machines to assist growers by harvesting their weediest paddocks.

“Even under best operating conditions the chaff cart puts 50 per cent of the brome grass seed in the cart, 25 per cent on the ground and 25 per cent goes over the rotor and into the bin. The suction system of the iHSD reduces weed seed losses over the rotor making it a more efficient option,” he says.

Pete follows a 5-year rotation of wheat, barley, lentil, wheat, lentil in large, 100–200 ha paddocks. He sows all crops on 25 cm (10″) row spacing at high seeding rate for increased crop competition and, where practical he sows paddocks east-west to gain better weed control.To improve soil fertility, chicken manure is applied at a rate of 3 t/ha every three years on paddocks that need it; often ahead of wheat. Deep ripping on the sand hills has been an effective measure to alleviate compaction and improve crop performance. Pete hopes to eventually implement a controlled traffic farming system that will help preserve the value of operations like deep ripping and also make the chaff deck system more effective.

The Edwards are also lifting productivity and reducing weed pressure on their poorer sand hill soils by double sowing barley, wheat and lentil crops. In just a few years Pete has noticed a real difference in the soil structure and moisture holding capacity.

Once considered a winter weed of southern cropping zones of Australia, annual ryegrass is being increasingly observed in more northerly districts and in summer crops in Victoria and South Australia. Read More...