A significant shift into continuous cropping in the Wickepin area south-east of Perth started about 10 years after the same change in the northern cropping regions of Western Australia. For Wickepin grower Gary Lang, this 10-year delay has given him the opportunity to listen and to learn about herbicide resistance.

“Hearing growers talk about the trouble they had run into with herbicide resistance made me sit up and take notice,” he said. “Aside from the more regular threat of frost damage, herbicide resistance represents the most significant threat to profitability if you are forced to take country out of production, so we have tried to get on the front foot with our weed management. We want to continue making crop choices that are not dictated by herbicide resistance in weeds.” 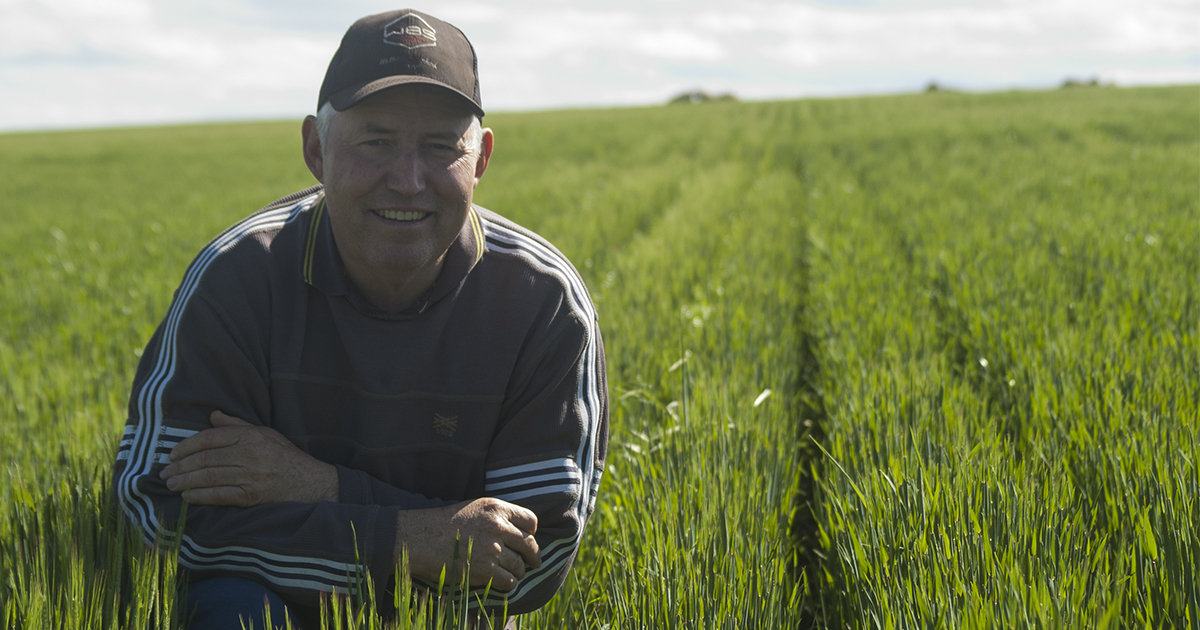 Across the 3780 ha cropping enterprise Gary grows 25 per cent canola, 15 per cent each of oats and barley, 10 per cent lupin and 35 per cent wheat. An additional 380 ha is utilised for prime lamb production. Ryegrass is the most challenging weed with wild radish posing a problem in some paddocks. While most of the wild radish is still susceptible to all chemistry, there is resistance to Group B and Group A fops in annual ryegrass.

“Wild radish is a less aggressive weed for us here but we take it very seriously due to the experience of growers further north,” he says. “While wild radish is still susceptible to herbicides it is possible to clean up a blow-out that may occur in years where the weather has prevented the application of the usual herbicide program. It will normally take three to four years to bring the weed numbers back down, but it is manageable.”

Frost has been a major limiting factor for the Langs for many years so they are making changes to their cropping program to reduce the risk of losses to frost. Wheat is becoming a less important part of the cropping system and Gary tries to avoid wheat on the frost-prone paddocks, where he can grow oats or barley more reliably. Although barley provides another option for frost prone paddocks, La Trobe barley is not overly competitive against weeds compared to some other barley cultivars, due to its short stature and slow early growth rate.

They also look to oats as a good crop choice for weedy paddocks for greater crop competition and sowing early means they can make use of trifluralin to provide pre-emergent weed control until the crop canopy closes. Growing oats for human consumption has not been common practice around Wickepin but it is proving to be a good option if the crop is sown early enough, taking advantage of the crop’s resistance to frost. Williams oats can be sown as early as the end of April to produce a very competitive, dense crop.

Frost has been a major limiting factor for the Langs for many years. Williams oats is proving to be a good option if the crop is sown early enough, taking advantage of the crop’s resistance to frost, and is a very competitive, dense crop. Sowing early also means the Langs can make use of trifluralin to provide pre-emergent weed control until the crop canopy closes.

The Langs delay sowing wheat to manage their frost risk and use a pre-sowing double knock operation of glyphosate followed by paraquat to give the crop a clean start.

Crop competition is achieved through narrow row spacing, higher seeding rates and crop cultivar choice. Gary uses a 12 inch seeder with splitter boots, making the row spacing 250 mm (10 inches) wide and does a blanket burn of cereal stubble at the end of the rotation before planting canola.

The Langs use higher seeding rates, such as sowing cereals at 90 kg/ha instead of the usual 60–70 kg/ha, in weedy paddocks or patches using variable rate technology to increase crop competitiveness.

On the western side of the farm the Langs usually grow canola–cereal–cereal and on the eastern side where the soils are lighter and the rainfall less, the rotation is commonly lupin–cereal–canola–cereal–cereal. Gary chooses to grow mostly triazine tolerant (TT) open pollinated and Roundup Ready (RR) canola cultivars for their herbicide traits and the higher biomass from the RR hybrid. Gary is pleased to have seven profitable crop options to work with when planning his program each year to minimise financial and frost risk while maximising profit and making the most of a wide range of herbicide and non-herbicide weed control tactics.

High biomass Hyola 404RR canola is very competitive against weeds and along with open pollinated TT canola offers alternate herbicide use patterns within the rotation.

In wet summers such as 2015–16 and 2016–17, melons, caltrop, fleabane and even some ryegrass and radish will necessitate two or three summer sprays.

Stopping seed set by croptopping lupins and spraying glyphosate under the swathe in canola, and implementing harvest weed seed control are critical components of Gary’s weed management program. Gary tried narrow windrow burning 1000 ha of canola in both 2013 and 2014 and found that the movement of potassium into the narrow windrow caused serious nutrient deficiency across 2000 ha that was still evident in 2016, prompting him to look at other harvest weed seed control tactics. For the last three harvests he has used a chaff deck system to channel chaff into the tram lines within his controlled traffic farming system.

“The chaff lining also relocates nutrients but there is much less material shifted in the chaff only,” he says. “Ultimately we’d like to have a weed destructor in our next header but in the meantime the $9000 investment in the chaff deck was easier to do than $70,000 for a chaff cart, which also requires more work.”

“In our environment we don’t seem to get the rotting down of the chaff in the tramlines that is observed in wetter districts but there is certainly fierce competition in the tramlines and we could spray the weeds in the tramlines if we felt it was necessary,” he says. “For now, we have added extra jets to the boom to apply more herbicide behind the wheels where there are generally more survivors. We have also added outer wing nozzles to ensure the tramlines under the wings get the full application rate.”

The chaff deck system delivers annual ryegrass seed into the tramlines where it competes with itself in a tough environment.

Gary is keen to avoid over-spraying the crop and compromising the benefit of crop competition. He occasionally brings the sheep on to graze the crop stubbles but is concerned that they may be shifting some weed seed out of the tramlines. So far there doesn’t appear to be a problem with the sheep concentrating their grazing efforts to the tramlines and adding a trampling effect to the chaff in the tramlines. Having the available dry feed – grain and weed seeds – concentrated into the tramlines, making grazing more efficient.

It is clear that Gary’s weed management program is working well and that he is ‘calling the shots’, not being dictated to by herbicide resistance. Much of his success could be attributed to the fact that he saw the potential risk early and started taking positive action to keep his weed numbers low.