Getting the edge on brome grass on non-wetting soils

On water-repellent soils, such as the Mallee sands of South Australia and Victoria, stronger crop competition has been shown to have an immense impact on brome seed production. In a difficult environment, where crop establishment is often patchy, researchers have demonstrated that water and nutrient harvesting within the crop furrow can result in better establishment when crops are sown on or near last year’s row. 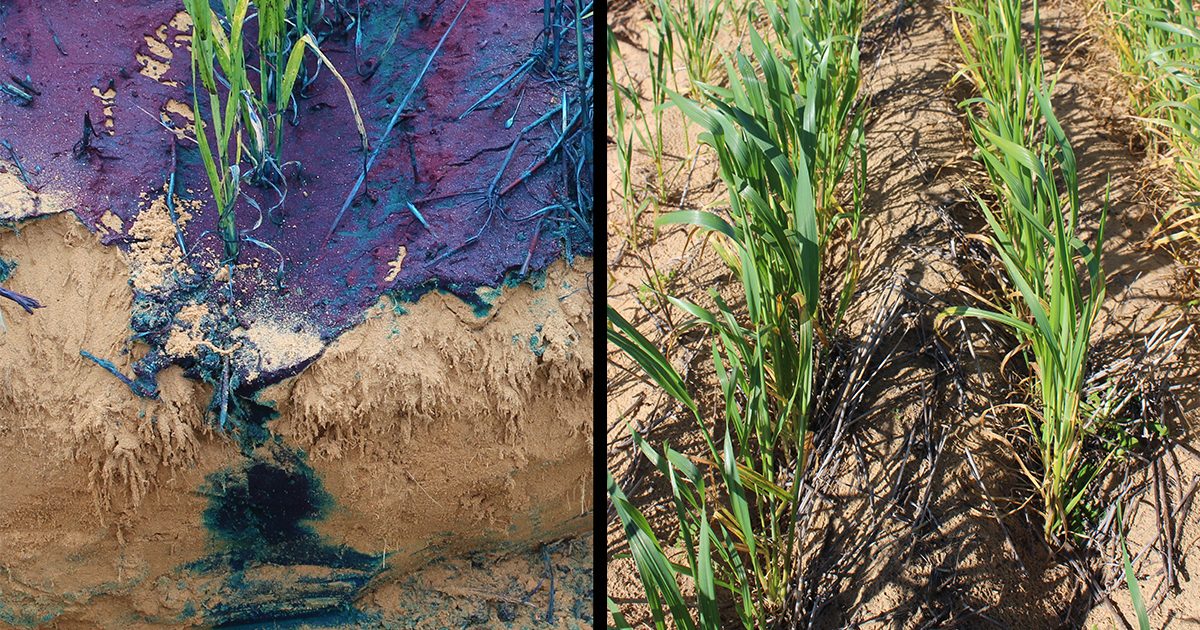 Dr Rick Llewellyn, research group leader (agricultural systems) with CSIRO says that brome grass is the most costly weed for Mallee farmers to manage, even though herbicide resistance in brome grass is currently low in the region.

“A series of trials have investigated the effect of different herbicide use, particularly pre-emergence herbicides, and row placement on crop yield and brome grass seed production,” he says. “To successfully manage brome grass it is necessary to keep weed seed numbers low and avoid blow-out situations. Our aim was to find the best options for reducing seed set.”

When this year’s crop can make use of the resources in last year’s furrow there is more reliable crop germination and it can allow earlier sowing in years with marginal rainfall. On non-wetting sands, the practice of edge-row sowing has led to reductions in brome seed set of at least 55 per cent, and as high as 75 per cent, over the past four seasons.

“Using edge-row seeding to achieve stronger establishment and crop competition on these difficult but widespread sands has resulted in a large and relatively reliable impact on brome grass seed production,” says Dr Llewellyn. “Growers will need to weigh this benefit against any potential disease risk and any stubble management issues in parts of a paddock that are not non-wetting sands, before changing their seeding set-up for edge-row sowing.”

One important observation was the extent of brome grass germination in the crop row at the time of applying the pre-seeding knockdown. With seven times more brome grass seedlings emerging on the row, a successful knockdown is very important and a great opportunity to give the pre-emergence herbicide the best chance of success.

Pre-emergent herbicides have the potential to achieve up to 75 per cent control of brome grass under optimal conditions but these products are notoriously variable from season to season. Trifluralin (1.5 L/ha) was commonly the least effective pre-emergent herbicide option while Sakura mixed with Avadex consistently achieved the greatest reduction in brome grass seed set.

“Unfortunately, the more reliable Sakura plus Avadex treatment, with its extended period of activity is too costly for common use in low input regions. This leaves growers to get the most from lower cost but less reliable pre-emergence herbicide options and increases the need to include non-herbicide tools, such as improved crop competition through tactics like edge-row sowing.”

Brome grass is a weed that demands an integrated approach to keeping the seedbank low, especially where growers are wanting to reduce their reliance on Group B tolerant crops.

Take a look at edge-row sowing submitted by one of our MSF members. Travelling at 9km/hr and sowing with a John Deere Conserva Pak, and StarFire guidance system giving 2cm accuracy. The dry start meant there was very little moisture mid row but moisture was found in the previous year's crop row. Sowing as close to the moisture band helps to get a better germination in dry conditions. However, the practicalities of edge-row sowing are still being worked through. It can be hard to manage stubble and keep it standing when sowing so close to last year's row. In this situation it has worked with accurate guidance systems that allow you to sow on the same row year after year and always in the same direction. Thanks to the GRDC Stubble project you can learn more about crop row placement in stubble retained systems specific to the Mallee at the link belowhttp://www.msfp.org.au/farmtalk-crop-row-placement