Winning the war on weeds with more diversity

Annual ryegrass is a serious challenge for growers across the southern and western grain growing regions with many herbicides no longer providing effective control. Robert Hart, his wife Alison and parents Bernard and Anne have taken on the challenge to use as many non-herbicide weed management practices as possible to reduce weed seed set.

The Harts manage a 3000 ha cropping operation, with an additional 800 ha of native pasture running 1800 head of sheep near Junee, NSW. Their main weed problem is annual ryegrass, which is resistant to Group B herbicides and Robert expects Group A resistance will begin to influence their herbicide choice in the near future. 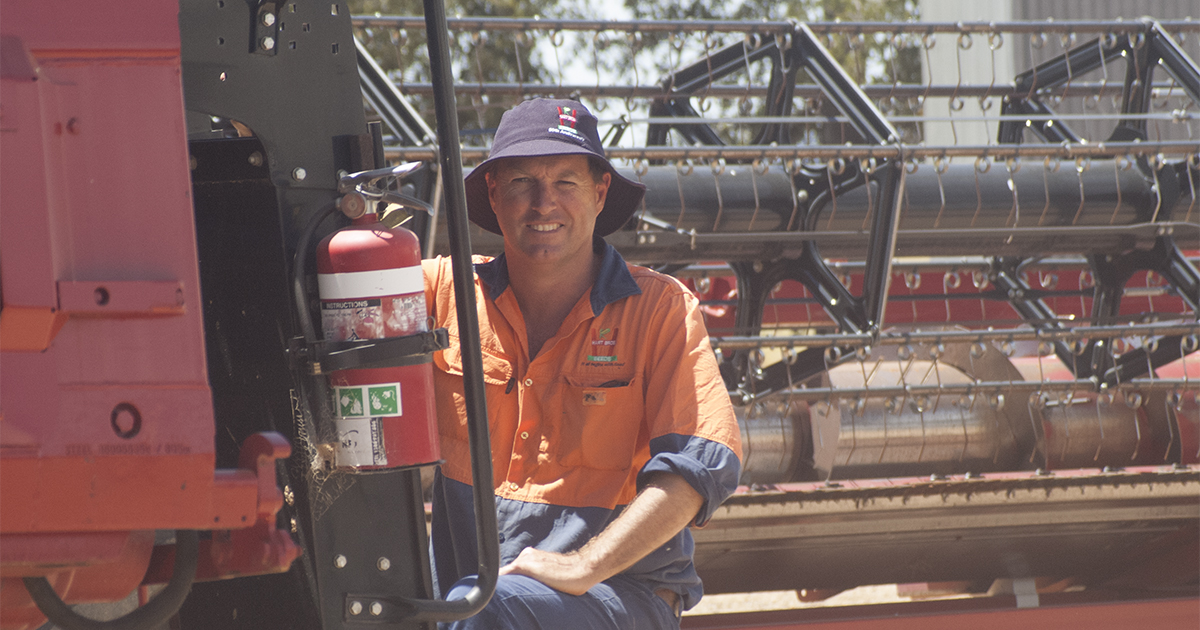 Robert Hart and his wife Alison have taken on the challenge to use as many non-herbicide weed management practices as possible to reduce weed seed set.

“Our testing continues to show that the ryegrass is still susceptible to glyphosate (Group M) products but we are observing reduced efficacy in the field,” he says. “We have Group C and D herbicides still working well and this will help extend the life of Group A herbicides such as butroxydim (Factor) and clethodim, especially in pulses.”

“Every year we send seed away to be tested for herbicide susceptibility,” he says. “The results are used to help determine the best crop and herbicide choice for each paddock while maintaining an economic operation.”

Robert plans to try sending live plants away for ‘quick testing’ so he can make informed herbicide choices within the same season.

The crop rotation on the Hart’s property is based first on markets, then on disease management and thirdly on weed pressure. They aim to be as flexible with their herbicide choice and usage as possible. With pulse prices remaining very attractive in 2017 Robert plans to increase the area sown to pulses from the usual 5% to around 20%, similar to their program in 2015.

In 2016 their cropping program included canola, wheat, barley, lupins and, for the first time, lentils. Their intention for 2017 is to also include dual purpose canola and oats for winter grazing.

“We are going into the second year of a double break rotations using pulses and canola,” he says. “We are not committed to a fixed rotation but as a rule of thumb, pulse – canola – barley – wheat works well financially as well as providing more weed management options. We avoid wheat on wheat and have found that barley performs well after canola.”

“Fathom barley has been highly effective in paddocks with heavy annual ryegrass burdens,” says Robert. “The new Condo wheat is suited to this area and is also competitive against grass weeds. Hyola 970CL is a dual purpose hybrid that we can plant early March to achieve canopy closure by May and effectively shade weeds, particularly if you avoid early grazing.”

To increase the competitiveness of each crop the Harts have recently moved from 13 inch (333 mm) to 10 inch (250 mm) row spacing using a tined Horwood Bagshaw parallelogram precision seeder. Robert says there are less blockages from heavy stubble load now they have moved to burning stubble on their frost-prone paddocks and using narrow windrow burning for weed seed control.

Desiccation of pulse and canola crops combined with windrowing canola has had a positive impact on ryegrass seed set and assists in harvest management.

Windrowing canola is a harvest management tool with a side benefit for weed seed control so Robert cuts the crop as low as practical to maximise this benefit.

Over summer the Harts control weeds such as hairy panic, black grass, mintweed, heliotrope and volunteer crop plants using one to three glyphosate-based mixes. Leading into sowing they apply a double knock with glyphosate followed by paraquat where possible, a tactic that is effective against all weeds. Sheep are also part of the summer weed management program as they are brought onto the cropping paddocks to graze the stubble after harvest and follow up on weeds that have been sprayed.

“We have brought sheep into the operation in the last few years so we can implement more management practices such as silage, pasture phase, haymaking and pasture topping to keep on top of our weeds,” he says. “For the mixed farming operation to work well we plan to increase the sheep numbers to around 3000 head.”

The Harts have been implementing strategic narrow windrow burning across the farm for the last three or four years but in 2016 they harvested about 60 per cent of the farm with the intention of burning the windrows. “Narrow windrow burning has worked well in canola, barley and wheat however it is a much easier task in canola,” says Robert. “To get away from burning and reduce the loss of nutrients and soil moisture from the paddocks we are looking at chaff lining or an integrated weed seed destructor with a disc seeder on even narrower rows at 7 inch spacing (175 mm) – the pointy end of weed seed control at the moment. This would be a big jump from where we are at present though.”

Narrow windrow burning chutes are made and fitted on farm. In 2016 Robert applied this harvest weed seed control practice across 60 per cent of their 3000 ha cropping operation near Junee.