Read time: 3 minutes
Resources / Articles / Ask an Expert / How can I get the most bang from crop-topping canola?

How can I get the most bang from crop-topping canola?

In an environment of increasing herbicide resistance, getting back in the driver’s seat with weed control relies on stacking tactics and not leaving all the heavy lifting to just one or two strategies. 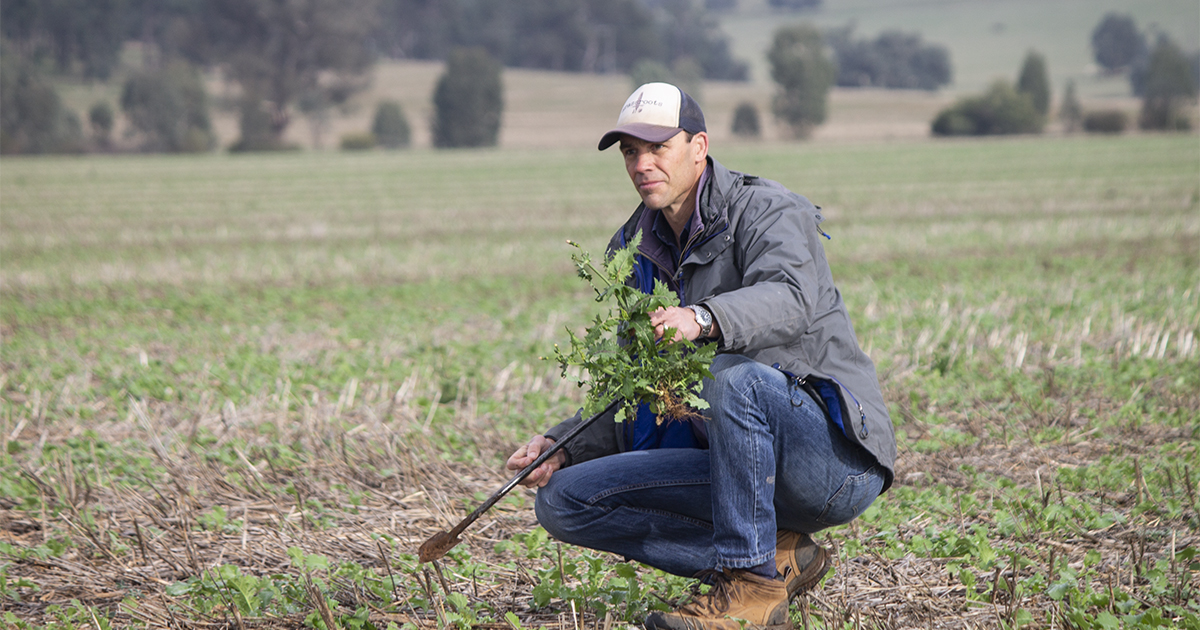 “One of the combinations we are advocating is crop-topping plus harvest weed seed control,” he says. “Canola is a good candidate for this package, particularly to drive down annual ryegrass numbers.”

“Being able to apply the registered glyphosate products early in the crop senescence in canola gives growers a better opportunity to interrupt weed seed set. Following the herbicide with a non-herbicide tactic like harvest weed seed control helps protect the herbicide chemistry by taking another swipe at weed seed that may have evaded the crop-topping tactic.”

Greg says the over-the-top option is generally a more practical option than applying the registered glyphosate products under the cutterbar if the crop is windrowed.

“Knowing the glyphosate resistance status of weeds in a paddock is really important,” says Greg. “If the weeds present have resistance to glyphosate then crop-topping is ineffective and should not be used.”

On some farms canola may be grown as often as every second year, putting heavy pressure on the crop-topping tactic. Under these circumstances, adding harvest weed seed control and maximising crop competition is absolutely essential.

What herbicides are registered for late season weed control in canola?

Longer answer: Products registered for application prior to direct heading or before/under the windrow* are weedmaster DST and Roundup Ultra Max. Weedmaster DST has a withholding period of five days. Diquat is also registered for use in canola (WHP 4 days).

The glyphosate products registered for canola can be applied to mature standing crops with a minimum of 20 per cent seed colour change to dark brown or black. Higher end label rates are recommended when crops or weeds are dense. Glyphosate must not be applied to crops intended for seed. Refer to the label prior to use and follow the instructions.

Glyphosate must not be applied to standing crops and again at windrowing.

*Pintobi Attack is also registered for this use pattern but is not a commercial product at this time.

What other benefits do I get from crop-topping in canola?

Longer answer: Crop-topping with high water rates gives good coverage and can penetrate dense crops to kill small, germinating weeds (such as sowthistle) as well as reducing weed seed set in mature weeds (such as annual ryegrass and wild radish). This essentially provides the first summer weed control application and should reduce the use of glyphosate over summer.

Crop-topping has the added benefit of providing early control of summer growing weeds like sowthistle while they are still small.

What if I suspect glyphosate resistance is present?

Short answer: Reduce glyphosate use across the cropping program and look for ways to protect this chemistry by driving down weed numbers.

Longer answer: Collect weed seed samples and have them tested for herbicide resistance. Knowing what still works is just as important as confirming your suspicions. If immature weeds are present they can be collected and sent for a QuickTest that will give you an opportunity to take action within the season.

Two take home messages from this research are: 1. treating younger plants at lower temperatures can improve glyphosate efficacy on resistant biotypes and 2. crop-topping with glyphosate is not effective on glyphosate resistant ryegrass.

Before crop-topping canola it pays to understand the herbicide resistance profile of the weeds present. Crop-topping glyphosate resistant annual ryegrass is not effective as 80 per cent of the weed seed remains viable after crop-topping.

Short answer: All harvest weed seed control (HWSC) methods provide very similar results – the key is the do everything you can to get the weed seeds into the front of the header.

Longer answer: Harvesting low and setting up your harvester to maximise weed seed capture are very important. Canola is a good crop for implementing HWSC because harvesting low does not add significantly to the amount of material that must be processed through the header. Many growers are also using canola chaff captured through HWSC tactics such as chaff carts, chaff lining or chaff decks as a high quality feed source for sheep when grazed.