How can I maximise grass weed control using hybrid canola?

A competitive canola crop can halve grass weed seed set. To achieve this you need a vigorous variety, robust pre-emergent herbicide and the best agronomic package.

EPAG Research agronomist, Andrew Ware, says the results of six years of trial work across the southern growing region with GRDC investment has demonstrated how important crop nutrition and time of sowing are for maximising canola vigour and yield. 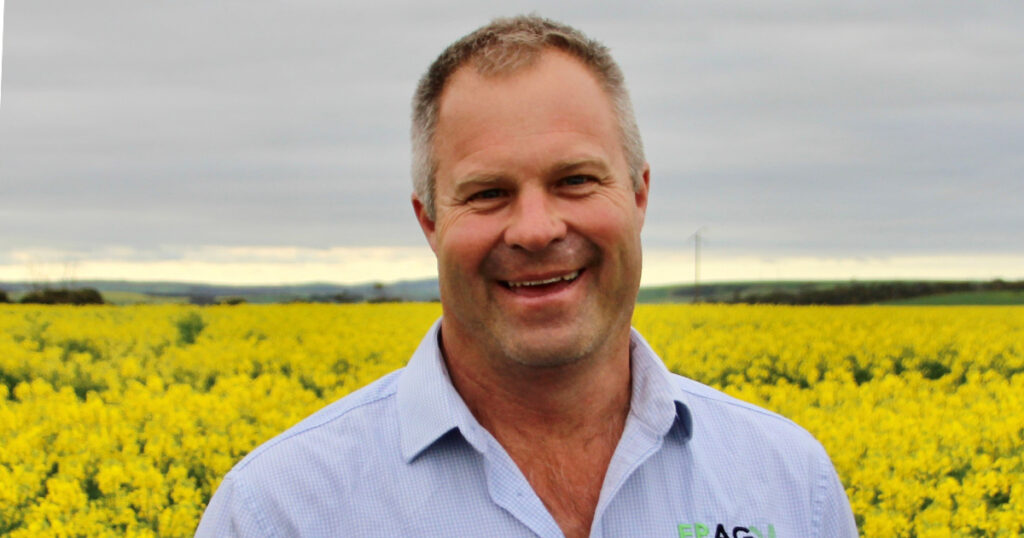 “Canola requires 80 kg nitrogen per tonne of grain produced,” he says. “Growers will be rewarded if they set a target yield and fertilise accordingly. The other key factor is to sow early – in April, through to early May for some varieties, so that start of flowering occurs in the optimal window.”

For growers in South Australia, 2021 brings the opportunity to grow many additional hybrid varieties, with an expanded range of herbicide tolerance traits, through the removal of the GM moratoria.

“Roundup Ready (RR) canola can be grown in South Australia for the first time this year,” says Andrew. “Herbicide resistance testing should be a key part of the decision to grow any herbicide tolerant crop as there is little advantage in growing a tolerant crop if the key grass weeds have evolved resistance to that herbicide.”

What has changed in canola agronomy in the last few years?

In brief: Growing hybrid canola requires higher management input to gain the full benefits of the higher investment in seed.

The details: Hybrid canola varieties are generally very competitive against weeds, particularly when sown in the correct window and supported with a robust pre-emergent herbicide package to give the crop a head start.

Canola yield is optimised when the time of sowing results in the crop flowering and setting pods when there is minimal heat, moisture and frost stress.

New traits and combinations available now or in the near future include stacked imi + triazine, glufosinate + triazine and glyphosate tolerance for weed control along with varieties with high omega 3 and non-shattering pod traits.

What are the key strategies for growing RR canola?

In brief: Use pre-emergent herbicide, sow early and apply the first glyphosate spray when the crop is at 1-2 leaf stage.

The details: If you have decided to grow RR canola this season you will already be aware of the stewardship agreement and the key requirement to a limit of two glyphosate applications per crop and applied before the crop reaches 6-leaf stage for Roundup Ready canola and first flower (three applications are permitted) for TruFlex canola. Only glyphosate formulations that are registered for use on RR / Truflex canola are permitted. Further details are available in Bayer’s Roundup Ready® Canola Technologies Grower Accreditation Workbook.

Sowing in the optimal window will often mean there is no opportunity for a pre-sowing knockdown. This means the timing of the first glyphosate application is strongly recommended at the 1-2 leaf crop stage – which is likely to occur while other paddocks are still being sown. 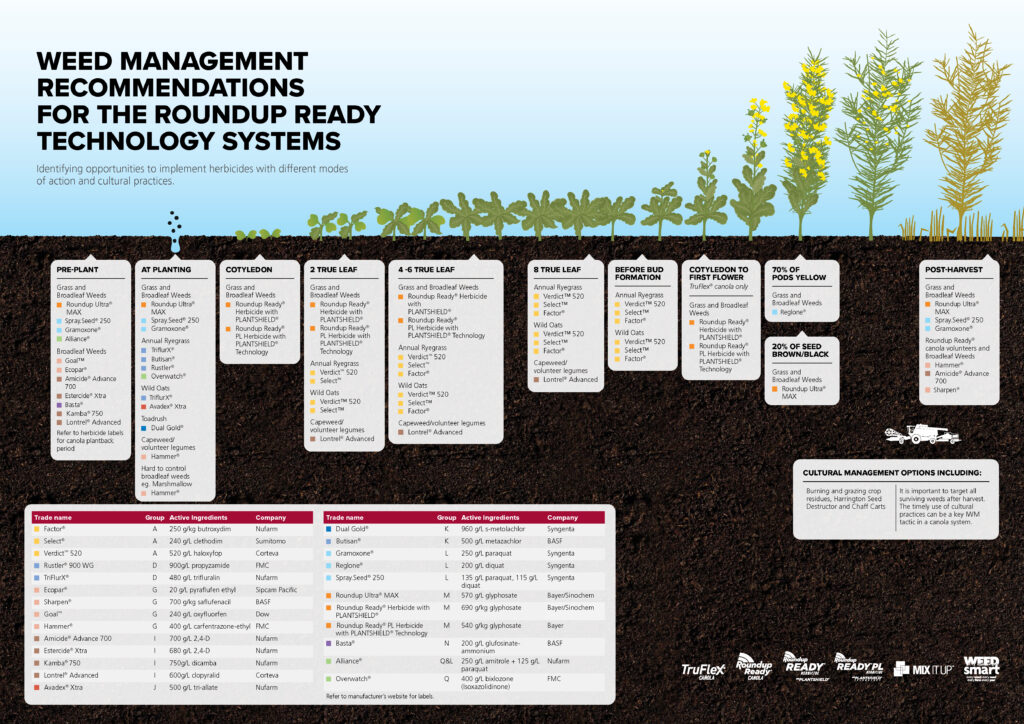 The RR Crop Management Plan outlines the chemical and cultural tactics applicable to this technology. Courtesy of Bayer. Click image to access the brochure.

What WeedSmart Big 6 tactics can I implement in hybrid canola crops?

In brief: All six!

There must be a plan in place to control survivor weeds. In Roundup Ready crops this means having strategies to take the pressure off glyphosate and preventing weed seed set. Crop competition can play a crucial role here, providing season-long suppression of weeds.

Consider the other herbicide options in-crop, such as including a registered pre-emergent grass herbicide and mixing clethodim or Lontrel with the second glyphosate application. The non-shattering pod trait (Podguard) supports direct harvesting but this is going to be too late to stop weed seed set, and crop topping with glyphosate is not going to control any glyphosate resistant weeds present. Windrowing is a reliable tool for managing late germinated and resistant grass weeds, especially when coupled with a harvest weed seed control method such as an impact mill, chaff lining and the like.

Strategies also need to be in place to control herbicide tolerant canola volunteers, most of which will germinate in the following season.