If you do nothing else different and just increase crop competitiveness, there will be fewer weeds in the crop and fewer weed seeds added to the seed bank. Increasing crop competition often reduces weed seed production by around 50 per cent.

Chris Davey, WeedSmart’s southern extension agronomist, says crop competition is a quiet achiever in weed control that also has a synergistic effect when applied with other tactics.

“When there is a competitive crop growing, the herbicides work better and harvest weed seed control works better,” Chris says. “By suppressing weed numbers, growers can avoid the difficulties that come with herbicide resistance and weeds have less control over crop choices.”

“Everyone has seen weeds flourish in a bare patch in-crop,” he says. “The quicker the crop can cover the inter-row space, the better. This is where pre-emergent herbicides and varieties with rapid early growth work well together. More competitive crops also assist with holding weed seed heads in the canopy ready for destruction with harvest weed seed control tactics.”

The WeedSmart Big 6 integrated weed management program starts with maximising crop competition to suppress weed seed production. Then add the other tactics, such as mixing and rotating herbicide modes of action, preventing seed set and harvest weed seed control, to reduce the impact of herbicide resistance.

What should I look for when choosing crops and varieties?

In brief: Look for varieties with vigorous early growth and plant architecture that provides maximum shade of the soil surface and weeds.

The details: The WeedSmart Big 6 recommends ‘diverse crop and pasture rotations’. In doing so, it is possible to disrupt the weed ecology through varied planting time (allowing a double-knock tactic in some years), opportunities to mix and rotate herbicide modes of action and varying harvest times.

Including competitive crops and varieties in a diverse rotation maximises the benefits. In the cereal phase, barley is widely considered more competitive than wheat, but within the suite of both wheat and barley cultivars, some offer more competitive traits, such as rapid early growth and denser canopy. Adding a hay crop can also have significant weed control benefits in some farming systems.

In the break crop phase, some canola cultivars are more competitive than others, and there is a known benefit of sowing larger seeds. Either choose to grow a hybrid variety or grade open-pollinated seed to select the largest possible seed for sowing. Pulses have shown that they can be quite competitive against weeds, particularly when sown on narrow row spacing.

Other tactics, such as crop-topping, swathing and manuring, can also be implemented through the rotation to drive down the weed seed bank. Field pea is a particularly effective brown manure crop to boost soil health and nutrition while stopping weed seed set.

There are distinct benefits in using consecutive break crops and cereals to target grass and broadleaf weeds, respectively. Two or more years are often needed to fully disrupt the weed ecology.

Variety choice on its own is a very useful tactic, but if you can also implement other crop competition tactics, such as planting on narrow rows, increasing the seeding rate, establishing an even plant stand, sowing at the optimal time and addressing soil constraints, then you can expect to grow ‘more crop and less weeds’.

In brief: All pre-emergent herbicides degrade over time – and that’s a good thing! – but when they start to lose efficacy, the crop must be ready to suppress any new weed germinations. 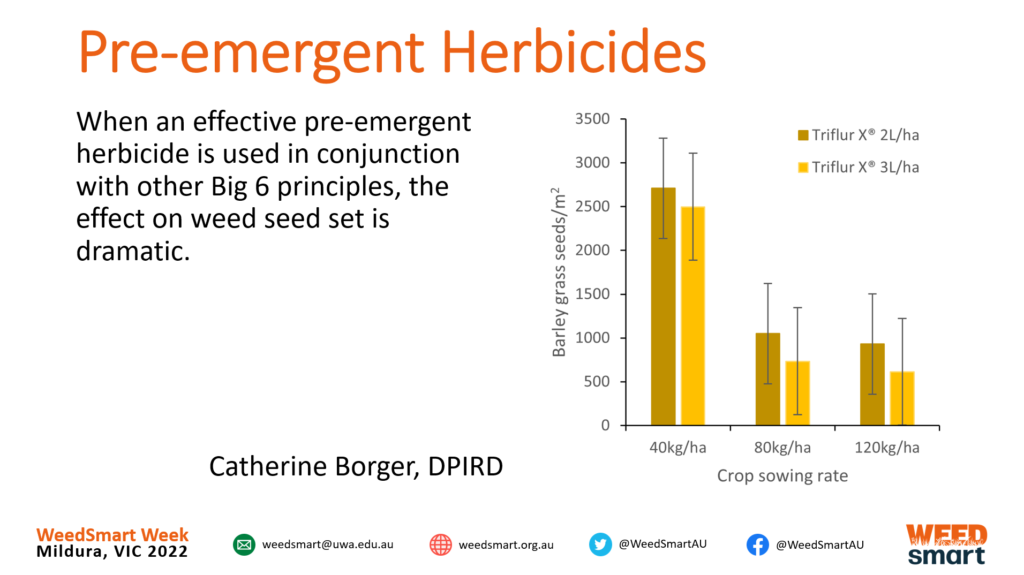 Several new products or new use patterns have come to market in recent years, offering growers more opportunities to mix and rotate pre-emergent herbicides through the crop rotation. Testing weeds for their susceptibility to the various options will avoid the cost of applying products that don’t work.

How does crop competition aid HWSC?

In brief: Growing a competitive crop supports harvest weed seed control as fewer weeds are present and those present tend to have weed seed heads held high in the crop canopy.

Some growers implement HWSC intermittently, such as narrow windrow burning canola crops but not cereals, while others use tactics such as chaff-lining or seed mills in every crop every year.

Crop competition is a quiet achiever in weed control that also has a synergistic effect when applied with other tactics....