Canola production is predicted to rise by 30 per cent in 2017 with over 98 per cent of farmers growing herbicide-tolerant canola cultivars. However, Australia has been lagging behind other producing countries in the uptake of hybrid cultivars that offer higher yield and more options for effective weed suppression in crop rotations.

Researchers at Charles Sturt University compared the competitive ability of 16 genotypes – hybrid and open-pollinated cultivars – and found the most competitive cultivars reduced weed biomass at flowering by a huge 50 per cent, significantly reducing the amount of weed seed added to the seed bank. A similar trial, conducted by researchers at the University of Adelaide, found that annual ryegrass plants that survived pre-emergent herbicide produced more than twice as much seed in open-pollinated TT canola than in the hybrid Clearfield canola.

Although the triazine-tolerance (TT) trait is known to confer a yield penalty of up to 10–20 per cent, this technology is currently adopted on 65–70 per cent of the national canola area. The vast majority of TT canola cultivars are open-pollinated while most Clearfield (CL) and Roundup-Ready (RR) cultivars are hybrids.

Kevin Morthorpe, *GenTech Seeds’ Canola Business Lead and Product Stewardship Manager hopes that the new hybrids available in 2017 will encourage growers to continue to shift away from the less competitive, open-pollinated cultivars to take advantage of the more vigorous, higher biomass and higher yielding hybrids. 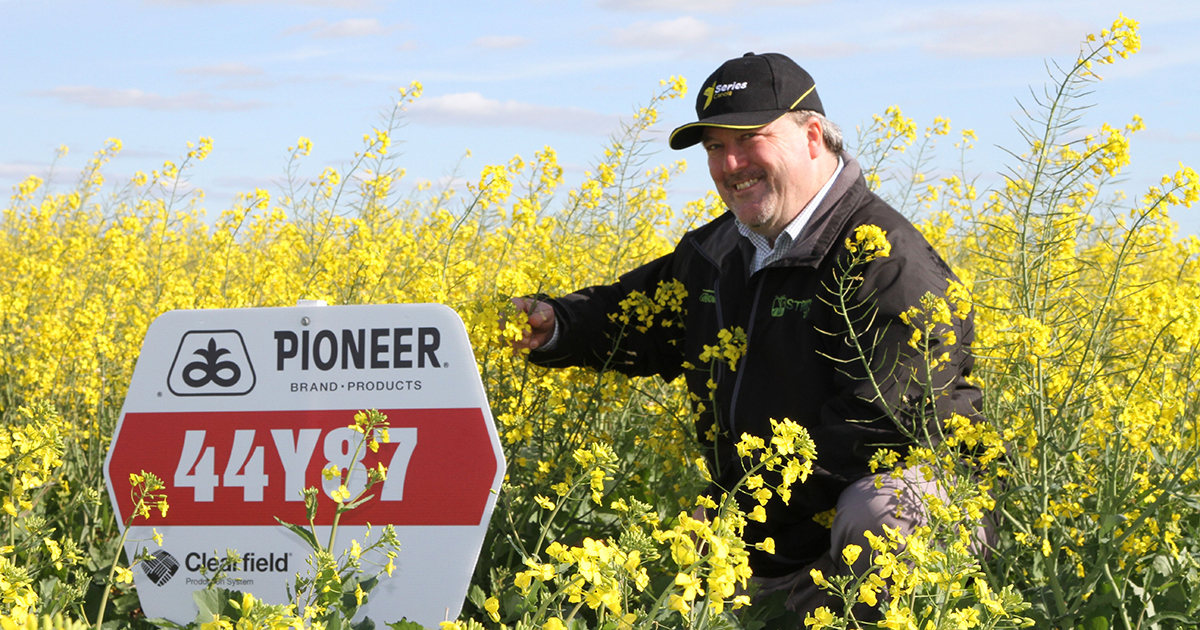 Kevin Morthorpe, GenTech Seeds, is concerned that canola growers are relying too heavily on the less competitive triazine-tolerant (TT) cultivars and missing out on the higher yield and better weed control benefits of hybrid canola systems.

“Crop competition is one of the best non-herbicide weed management tools available and the new hybrids are offering growers real bang for their buck in terms of extra yield and driving down the weed seed bank,” he said. “These benefits for the grower far out-weigh the additional cost of hybrid canola seed. The yield advantage achieved through hybrid vigour only occurs in the F1 generation so retaining seed for future use is counter-productive.”

Mr Morthorpe said enhanced crop competitiveness in hybrid crops is best achieved through attention to crop nutrition to optimise early growth and harvestable yield. “Research studies in canola have not shown a plateauing in crop yield response to higher nutrient input as is often observed in the ‘haying off’ of cereals at higher nutrient rates,” he said.

The suppression of weed growth is closely tied to strong root development, increased crop biomass and improved early crop vigour. Field trails also indicate that some cultivars have an allelopathetic effect on weeds. Speedy emergence, early vigour, rapid ground cover and height are all important characteristics of the most competitive hybrids.

Hybrid growers are also able to strategically integrate alternate herbicide modes of action and reduce reliance on Group A herbicide applications in the canola phase.

Hybrid canola suppresses weed biomass and seed production by about 50 percent compared to open-pollinated triazine-tolerant (TT) canola cultivars due to the speedy emergence, early vigour, rapid ground cover and height characteristics of the most competitive hybrids.

GenTech Seeds, an industry partner of WeedSmart, is committed to product stewardship. Their recently-published ‘Herbicide Tolerant Canola Stewardship Guide’ outlines the sustainable use pattern for all herbicide tolerant cultivars. Mr Morthorpe said the stewardship guide is a practical approach to integrated weed management within the canola phase and fully supports the The Big 6.

“To protect Clearfield technology, the whole farm rotation plan needs to limit the use of ALS-inhibiting herbicides to no more than two out of four years. Avoid crop injury by using quality assured, first generation seed and monitor the carry over risk of imidazoline herbicide on future crop rotation options.”

“Planting Roundup-Ready hybrids requires a critical assessment of the use of glyphosate as a stand-alone knockdown for non-crop application such as fencelines and over-reliance across the farming system. A whole-farm strategy needs to be in place to manage glyphosate resistant weed populations and to control RR crop volunteers in the fallow phase.”

The general principles for weed control and herbicide use apply for all herbicide tolerant canola systems, including using a combination of registered pre-emergent and post-emergent herbicides, always following the label directions of use and pro-actively implementing diverse weed management tactics across the farming system.

“When it comes to managing herbicide resistance and protecting the plant breeding technologies available, the key is to have low weed numbers entering and leaving the canola phase,” he said. “To achieve this, growers can rotate the crop types, herbicide tolerance technologies and herbicide modes of action used across the crop rotation to broad the opportunities to implement a diverse range of weed management tactics to prevent weed seed set and to implement harvest weed seed control to collect any seed present at harvest.”

*GenTech Seeds is the exclusive producer distributor of Pioneer® brand products in Australia.