Kym and Katie I’Anson set out 20 years ago to overcome the serious soil constraints on their farms to grow more even crops and squeeze out the weeds.

The family have been farming on their ‘home farm’ since 1871 when Kym’s great-great grandparents, Leonard and Maria, emigrated to Australia. I’Anson Farms now consists of a 2200 ha continuous cropping enterprise on several blocks in the Marrabel district in South Australia, ranging from 250 mm to 450 mm annual rainfall. Kym and Katie are ably assisted in the farming operation by Kym’s parents, Murray and Ann, farm manager Chris Hallion and mechanic Scott Fisher.

“Our biggest challenge is managing very variable soil types and climates across the blocks we farm,” says Kym. “The farms vary considerably in rainfall and susceptibility to frost, and the soils are prone to acidity and sodicity, which impact on crop yield potential.” 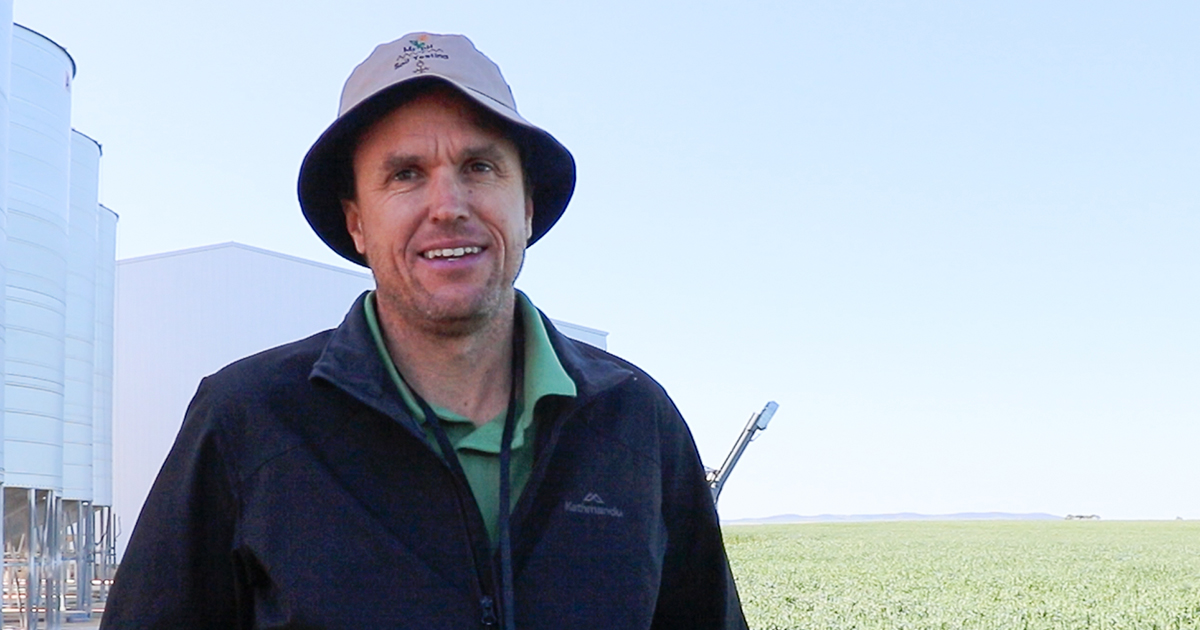 Kym I’Anson farms with his wife Katie and parents Murray and Ann at Marrabel, SA.

In the early 2000s Kym and Katie began soil testing to characterise their soils and create pH maps, initially for their two home blocks. The red brown clay loam soils (about 70% of the area) were acidic at pH 4.4 to 5.5 CaCl2 and also had sodic patches that seal off and pond water on the soil surface.

“Across almost every paddock there are areas of less acidic, non-sodic grey shale soils, mainly on the ridges, and deep black cracking clay soils that are only slightly acidic,” says Kym. “It was clear that we would need to apply lime at a variable rate across the farm to lift the average pH to around 6 CaCl2, both from a practical and economic point of view.”

Starting in 2006, the I’Ansons applied two to three applications of highly reactive Nutrilime® at a rate of 2.5 t/ha on the red brown clay loam soils, and 3 t/ha of Hi-Ag gypsum on the sodic patches over a 10-year period. The grey shale received one to two applications of lime and no lime was applied to the black clay soils.

“Our aim was to improve overall crop performance and, in the process, increase crop competition against weeds,” he says. “Weeds like annual ryegrass can tolerate acidic soils and they also produce vast amounts of seed in waterlogged patches where the crop has either not established or has died.”

Now that Kym and Katie have achieved their goal of an average soil pH of 6 across the farms, and improving the water penetration on the sodic areas, they have seen a shift in the weed spectrum on the farms.

“Ryegrass continues to present challenges, but we know how to keep numbers low using a variety of tactics,” says Kym. “With the improved soil nutrition we are seeing more marshmallow and ivy leaf speedwell, and brome grass is also more prevalent.”

Kym and Katie follow a crop rotation of canola, wheat (bread and biscuit varieties) and oaten hay for export. Once every 10 years or so they also grow faba beans. They use their soil maps to plan the crop rotation and choose varieties that will perform best in each climatic and soil type zone while maintaining a crop rotation that suits their business.

The maps they have created of the farms form the basis of their variable rate applications of lime, gypsum, chicken manure, seed and herbicide. Some of these operations are on-the-go variable rate while others are simply on and off according to the requirements of the block or cropping zone.

Their approach to weed control follows the WeedSmart Big 6 philosophy of maximising crop performance and using multiple herbicide and cultural tactics to keep weed numbers low. Crop competition is their number one tactic to reduce weed growth and seed production, and all other tactics are aimed at stopping weed seed set on the remaining weeds.

The I’Anson’s consider wheat to be the weakest link in their system with few in-crop herbicide options available. To avoid a ryegrass blow-out in the wheat phase they have implemented a range of tactics including – increased seeding rate in paddocks prone to cooler growing conditions, double or triple knocking before seeding and using a Redekop SCU for harvest weed seed control at the end of the season.

The double-knock is often not possible ahead of canola, which is usually sown dry in early April.

To minimise their exposure to frost the I’Ansons sow competitive Clearfield canola varieties early with ample nitrogen, aiming for canopy closure by early June. During summer they apply about 3 t/ha of chicken manure to replenish the soil nitrogen levels after growing hay.

Canola is sown on 25 cm (10 inch) row spacing with a DBS precision planter and the crop will germinate on just 5 mm of rainfall. Kym applies two shots of clethodim in canola, the first is applied at cotyledon stage just in the ryegrass patches and the second is mixed with Group 2 [B] herbicide imazamox + imazapyr (Intervix), and applied across the whole paddock. Both applications are done early while conditions are still warm enough for clethodim to be effective.

“Choosing the right variety to suit the different environments on the farms is very important for us,” says Kym. “We also consider mixing varieties in some situations to expand the flowering window and minimise the impact of frosts.”

The improvements in soil nutrition and particularly the amelioration of the waterlogged sodic patches has resulted in strong performance of the canola crops.

The canola is sprayed with glyphosate prior to windrowing. This timing is to target the ryegrass when it is still green and has not set seed. The I’Ansons find that applying glyphosate at a different time of year seems to improve the efficacy of the herbicide on ryegrass and they can achieve 100 per cent control, which is not seen at any other time of year.

Although canola has been the break-crop of choice for the I’Ansons for many years, they also include faba beans in their rotation, about one crop in every ten years.

“Canola has been very profitable for us and provides all the break-crop advantages of pulse crops other than fixing nitrogen,” says Kym. “But we have grown faba beans previously and know they are great for weed control because you can implement numerous tactics in the one year. Beans also tolerate more frost than canola so we like to keep them in our rotation.” 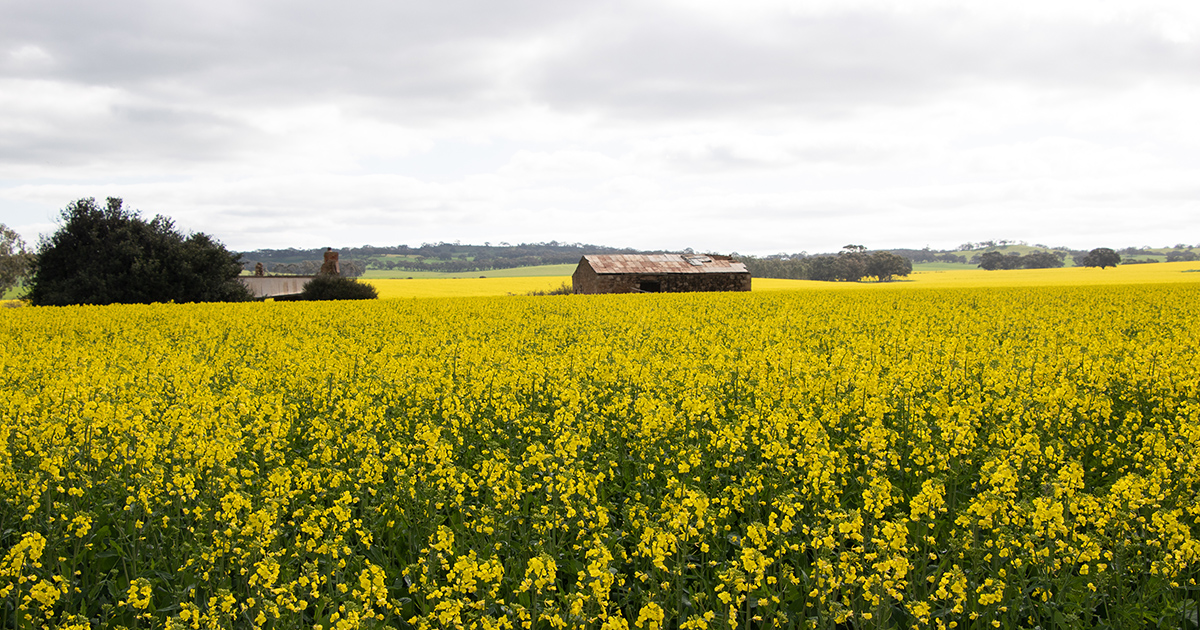 Hay-making for profit and weed control

Oaten hay production is the main enterprise for I’Anson Farms, and one that the whole family enjoys.

Their purchase of a Krone high density 8x4x3 baler in 2016 was a game-changer for their business, providing multiple benefits. Kym says the baler has increased their capacity from 3000 bales to 10,000 bales per year, meaning that they now don’t hesitate to bale crops that are frosted.

“Our freight costs are reduced because you can load more hay on a truck and we can store more hay on-farm in our existing storage sheds,” says Kym.

To maximise the benefit of hay as a weed management strategy, the oats is sown with splitter boots on 25 cm (10 inch) row spacing, which spreads seed in a 3 to 4 inch wide band, making the inter-row very narrow. In addition to this, 30 kg of seed is spread in front of the bar to take advantage of the extra soil disturbance from the splitter boot – resulting in almost zero row spacing.

“We try hard to choose varieties and planting dates that will maximise the benefit of hay making on reducing weed seed production,” he says. “It can be difficult to get ryegrass seed to germinate in the hay phase, which follows wheat, our least competitive crop. Using the splitter boot generates more soil disturbance to encourage ryegrass germination.”

The initial maps of the I’Anson’s farms were created from hand-cored soil samples at a density of one sample per hectare, at locations on a grid that also took into account visual indications of soil type boundaries.

Since then Kym and Katie have invested heavily in Veris on-the-go soil testing equipment and have a large client base of growers across South Australia keen to better understand their soils.

The Veris machine operates along the wheel tracks of the 36 m CTF swathe, taking samples every 25 m, resulting in 10 samples per hectare. The unit lowers a small shoe that collects soil from a metre length as the machine moves forward. The sample is raised to the pH electrodes and the result is logged automatically. The on-board testing is 95 per cent accurate when compared to laboratory testing.

The increased sampling density of the on-the-go system compared to the earlier hand core sampling gave the I’Ansons more confidence in the boundaries between zones and reduced the area needing high rates of lime by about 25 per cent.

“We will re-lime anything that has a pH less than 5.4 immediately,” says Kym. “Areas with pH between 5.5 and 6.0 are re-limed in higher income years.”

On their own farms they are continuously updating and using their soil maps for a wide range of crop and weed management decisions.

“The maps are the basis of any variable rate applications we do, and we use them when making decisions about our cropping program and our herbicide applications,” says Kym.

“Because of the impact of frost here we are cautious of spending money on more expensive pre-emergent herbicides,” says Kym. “The maps enable us to target weedy areas with pre-ems to hedge our bets in some seasons after we have applied any broadacre sprays.”

The I’Ansons have found that ryegrass, wild oats and radish are controlled well through their consistent efforts to bolster crop competition and apply multiple tactics to keep weed numbers low. Marshmallow likes the improved nutrition and is now their main weed, along with speedwell, which has the capacity to choke out crops. New tactics will be developed to manage these low-growing, spreading weeds. 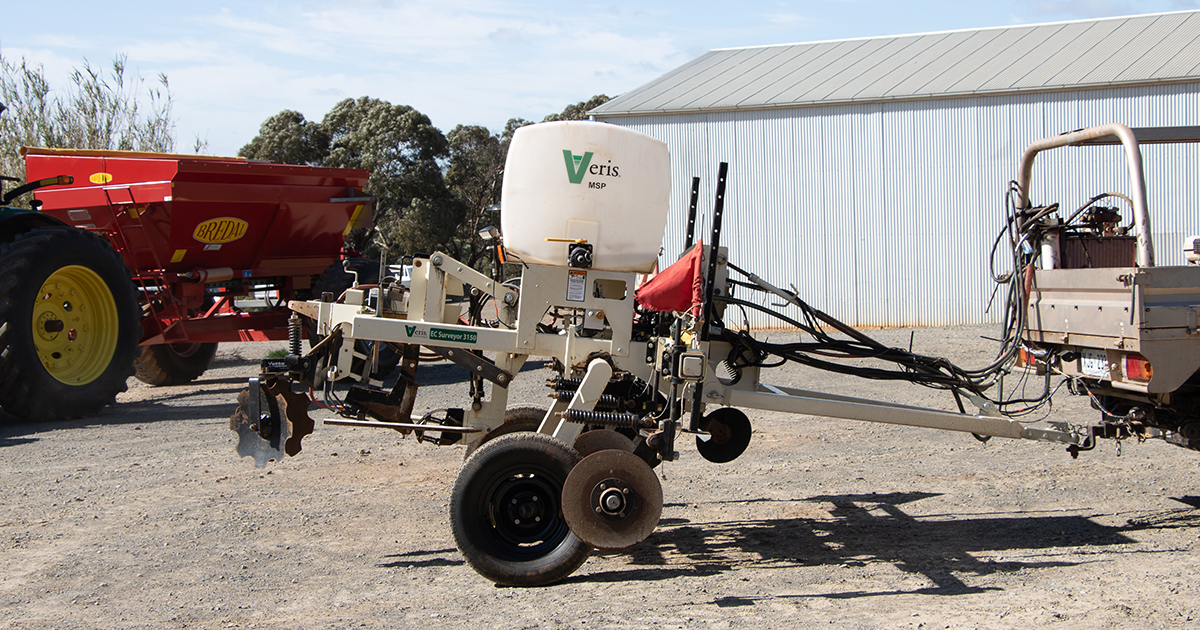 Kym and Katie have invested heavily in Veris on-the-go soil testing equipment. The resulting maps are the basis of any variable rate applications they do, and are used when making decisions about their cropping program and herbicide applications.