with Dr Michael Walsh, The University of Sydney

Harvest weed seed control (HWSC), is a key component in the WeedSmart Big 6 tactics for managing herbicide resistance on grain farms. In the northern region there has been some scepticism surrounding how effective HWSC will be in capturing seed from common weeds in the region.

Dr Michael Walsh, Director of Weed Research at The University of Sydney is a pioneer of harvest weed seed control research and is convinced that the tactic can be effectively deployed against northern region weeds. 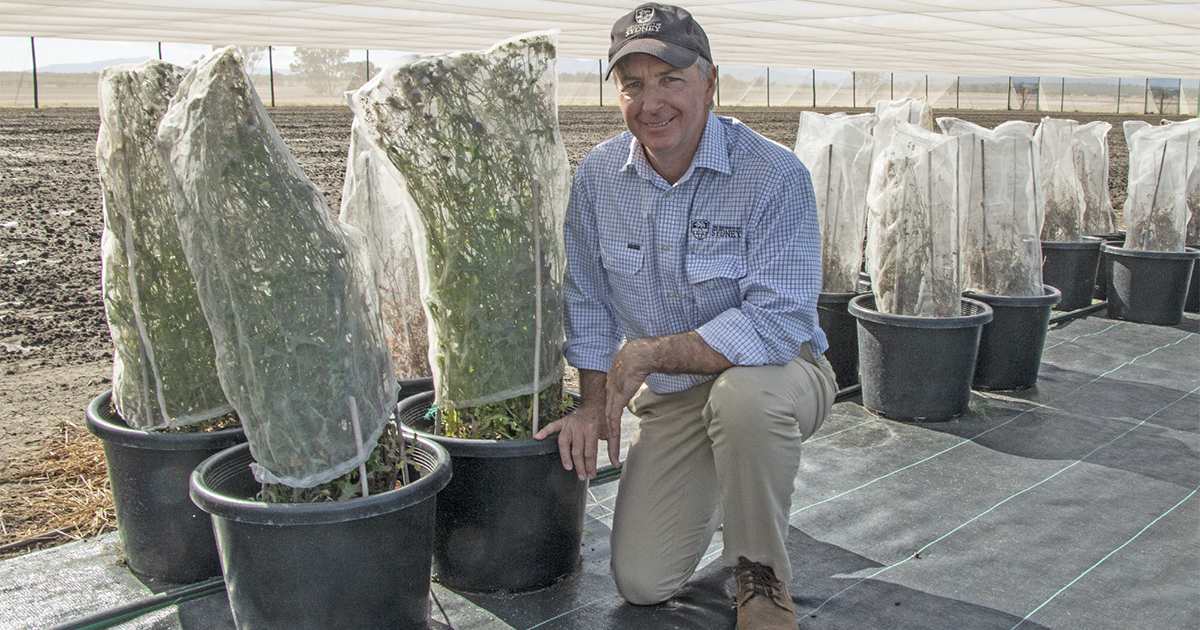 “The concern people usually have is that several key species in the north start shedding seed before the winter harvest,” he says. “Pre-harvest shedding does reduce the impact that HWSC can have on the seed bank of some species, but there is also solid evidence that the harvest operation can collect a significant amount of seed even if the seed shedding process has begun.”

“Even in weeds such as sowthistle where the seed is light and wind borne, not all the seed in each seed head matures at the same time. This means that while some might be lost, the immature seeds can be collected and destroyed using any of the harvest weed seed control tools.”

Dr Walsh says chickpea crops are a great place to start with HWSC because the crop requires a low harvest height, which increases the amount of weed seed that is collected, and many crops are desiccated prior to harvest, which may assist with seed retention in some weed species.

“The concept of harvest weed seed control was invented in Australia in response to herbicide resistance, and has been adopted by about 50 per cent of grain producers nation-wide,” says Dr Walsh. “The idea is now being adopted internationally and is proving beneficial in driving down the seed bank of many weed species.”

What northern weed species are the best candidates for HWSC?

Longer answer: These species are rated as very high to intermediate for seed retention at harvest. This means that at least 20 per cent, and up to 100 per cent, of the seed is present on the plant at harvest and able to be collected through the front of the header. Once in the header, destruction of the seed is almost guaranteed through impact, burning or breakdown, depending on the HWSC method used.

What about flaxleaf fleabane and awnless barnyard grass?

Short answer: Seed retention of these two species at harvest is highly variable.

Longer answer: Both flaxleaf fleabane and awnless barnyard grass have a wide range of seed retention at harvest. Ranging from less than 20 per cent to over 90 per cent, the impact of HWSC on the seed bank is not a sure thing, but in some years could be very effective.

Which HWSC method is best?

Short answer: All are equally effective at reducing the weed seed bank.

Longer answer: The HWSC methods currently available to growers are narrow windrow burning, impact mills, chaff lining, chaff tram-lining, chaff carts and bale direct. All except the impact mills have some level of nutrient removal or concentration. Narrow windrow burning and chaff carts usually involve a burning operation the following autumn and the bale direct system relies on a market or on-farm use for the hay.

The impact mills, bale direct and chaff cart systems require sizeable investment and harvester modification while the other systems are very cheap and relatively easy to set up.

All HWSC methods are equally effective at reducing the weed seed bank. The chaff tramlining system shown here delivers the chaff component of the crop residue onto the tramlines where it is left to decompose over time, killing much of the weed seed present.

How often does HWSC need to be done to be effective?

Short answer: The more the better but it doesn’t have to be every year in every paddock.

Longer answer: Long term focus paddocks in WA have shown that HWSC every second year, in addition to in-crop herbicide applications, will consistently drive down the weed seed bank to very low levels.

Within a crop rotation many growers choose to implement HWSC in certain crops. For many, the break crops are the preferred crops due to lower levels of stubble, and for pulses, lower harvest heights.