Jamie and Susie Grant are always on the front foot when it comes to storing soil moisture to maximise yield in their dryland cotton crops on ‘Kielli’ near Jimbour on Queensland’s Darling Downs.

Over the years they have adopted controlled traffic, minimum tillage, cover cropping and vigilant weed management as key strategies to maximise water infiltration and minimise losses to run-off, evaporation and wasted evapotranspiration throughout the year.

The Grants have implemented an integrated weed management system that incorporates several of the WeedSmart Big 6 strategies, with an emphasis on preventing weed seed set.

Jamie says they have not grown a winter crop for over 20 years and have phased out other summer crops, such as sorghum, in preference for dryland cotton.

“For the last 15 years we have grown French millet as a summer cover crop on half the cropped area. And this year we are moving to a new configuration where we will have the whole farm sown to millet and cotton in alternate bays,” says Jamie. 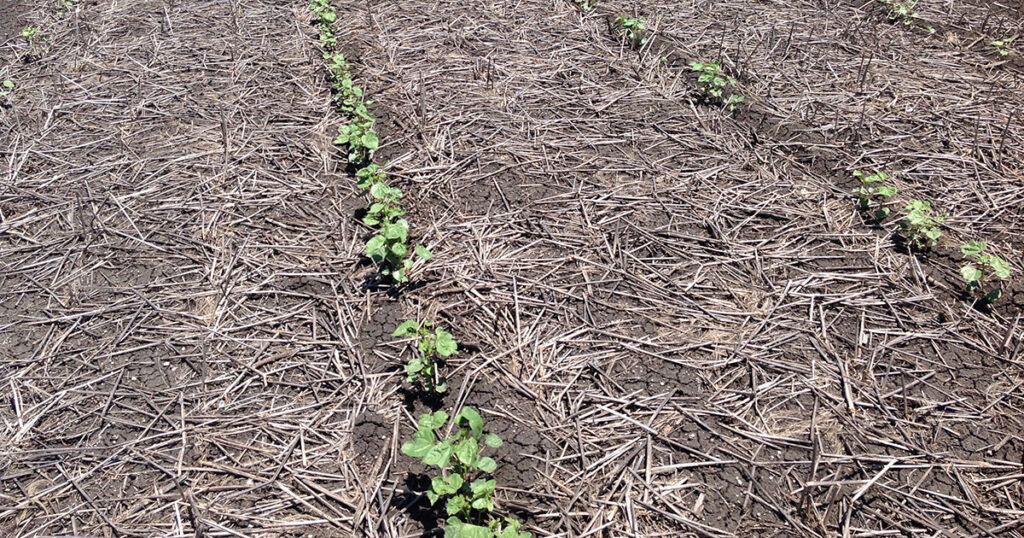 Jamie expects this system to increase infiltration and storage of moisture across the farm and to support a higher yielding cotton crop.

“During summer, the soil will be better protected from erosion with ground cover spread over the whole farm, and in a good rainfall season the soil reserves should be refilled and available for use in a subsequent drier year,” he says. “We have done a small, 9 m wide trial of the new configuration and the difference in cotton yield was phenomenal.”

Summer weed management begins with a double knock prior to planting both millet and cotton to ensure the crops can establish in a weed-free environment. Millet is planted in October then sprayed out when the stalks have reached maximum cellulose level but before the plants set seed. The cellulose-rich stalks reach about a metre in height within about six weeks of planting.

When the crop is sprayed out, the stalks collapse to produce a 100 per cent mulch cover that protects the soil surface from evaporation and erosion, while allowing rapid infiltration of rainfall and suppressing weed germination, especially over summer. Volunteer cotton is controlled if necessary in the millet.

The Grants follow industry best practice for the in-crop management of weeds in their Round-Up Ready cotton.

Over 15 years ago Jamie and Susie invested in optical spray technology to better manage their fallow weeds, but it was never the full solution. The problem of treating weeds of varying size and maturity meant that weeds were an ongoing drain on their precious soil moisture stores.

“When we bought one of the first WeedSeekers into Australia we knew we would reduce our herbicide use in the fallow, but the time taken to treat weeds using the optical weed detection technology was a limiting factor,”says Jamie. “Before long we had moved to a wider WeedSeeker boom just to get across the country quick enough. Then we added a broadacre spray behind the WeedSeeker to pick up the smaller weeds – the whole system just wasn’t working well enough due to labour and timeliness factors.”

When Jamie heard about the development of the SwarmFarm robots he was keen to be part of the early testing phase and was the first grower to deploy a SwarmBot – named November – under commercial conditions.

“I knew from the start that the robotic platform would solve our weed control problems and could see the potential for this technology to revolutionise the way we farm,” he says. “We have since leased a second robot – Victor – practically eliminating the need for a broadacre sprayer. The next modification will be to give the robots higher clearance so we can conduct in-crop weed control right up to canopy closure in the cotton.” 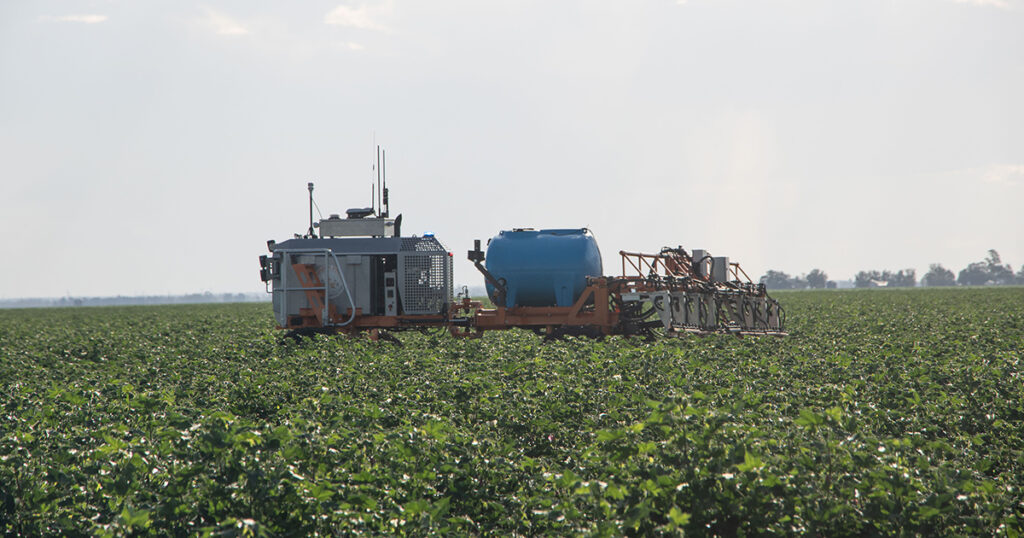 Jamie and Susie were controlled traffic pioneers, so the move to lightweight machines for all their field operations, other than harvesting, is the ultimate aim. Jamie expects the robots to be able to undertake all the spraying, ground preparation, planting and fertilising operations and wheeltrack renovation within the next few years. This relies on the fine-tuning of the SwarmBot auto-refilling capability.

The current use of the two robots, each fitted with a 9 m WEED-IT boom and 1000 L tank, for fallow weed spraying has halved the Grant’s herbicide use compared to the 27 m wide WeedSeeker boom.

“The difference in herbicide use has come through more proactive use of the optical weed detection technology, rather than reacting once we saw weeds growing in the field,” says Jamie. “We are continuously spraying and treating smaller and smaller weeds, with very, very few misses. We are always on the front foot with weeds now, so we can take advantage of any planting opportunities that arise, without having to wait to spray weeds ahead of the planter.”

The robots also earned their place on the farm during the drought by preventing the establishment of weedy patches. Jamie can justify the use of different chemical groups in fallows that might otherwise be considered too expensive, and herbicide resistance has all but disappeared. 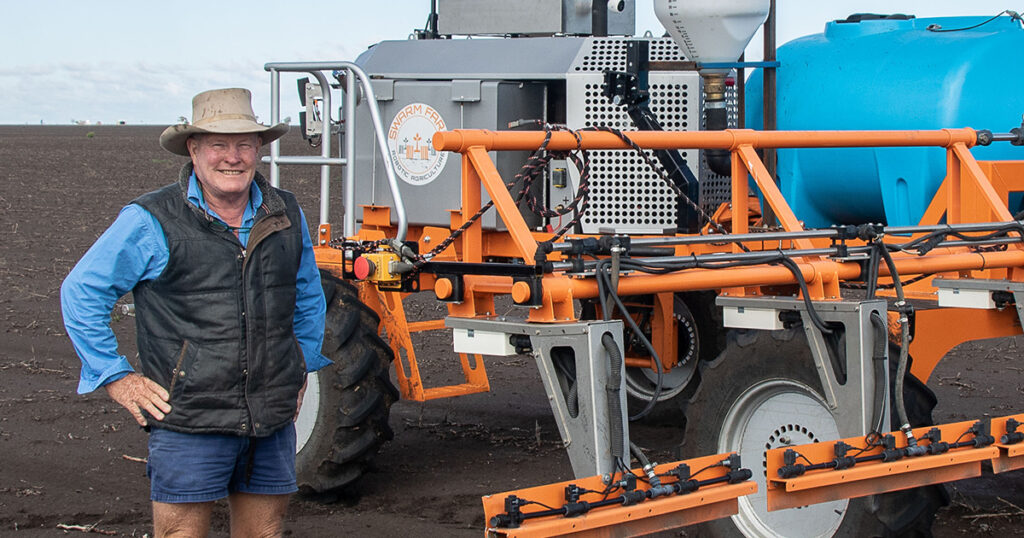 The robots have prevented the establishment of weedy patches and allowed the use of a wider range of herbicide groups in the fallow.

The robots work at a slow, steady pace, providing a more stable platform for the boom than the much wider WeedSeeker rig, and enabling the sensors to detect very small weeds – down to just 5 mm in diameter. The operation is repeated every two weeks, so weeds never have the opportunity to mature or set seed.

The glyphosate is very effective on small weeds and any misses or hard to kill weeds are captured with an application of Starane (Group 4 [I]) or Biffo (Group 10 [N]) – using hardly any product doing an excellent job on the few remaining weeds. After planting cotton Jamie applies paraquat to be on the safe side when it comes to minimising the risk of glyphosate resistance.

“After planting we expected to park the robots until the cotton crop was finished, but in fact we are finding more and more jobs for them to do,” says Jamie. “We are already using them to apply foliar fertiliser and early in-crop weed control. We are working toward eliminating the need for the high clearance Spra-Coupe for in-crop spraying.”

Using the robots, the Grants have reduced the amount of herbicide used in-crop by at least 50 per cent, and most likely close to 70 per cent, by only spraying the inter-row area and not the cotton plants. Achieving this has been as simple as blanking off three nozzles over each cotton row.

“Although the sensors on the WEED-IT respond to some of the cotton leaves in the inter-row, there is still a large reduction in the amount of herbicide used compared to the blanket spray using the Coupe,” says Jamie.

After rain, 28 per cent weed cover is the highest weed density that the Grants have sprayed using the robots. At this density they would have previously chosen to use the broadacre sprayer rather than the WeedSeeker boom. Jamie says the robots had no problem taking care of the situation, but they did require several refills. He hopes to get to the point where the robots only require checking and filling once a day, and he is ‘in on the ground floor’ assisting SwarmFarm with the auto-refilling trials. 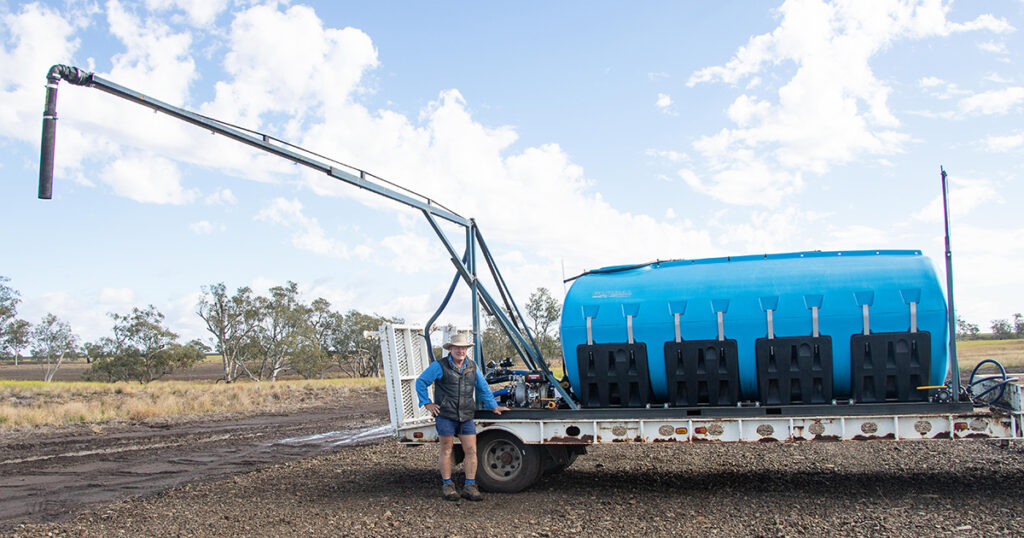 Jamie says automatic refilling of the robots will be the next big step up for spraying efficiency.

Ultimately, Jamie would like to have enough robots to keep one staff member occupied full time. Even now, having Victor and November taking care of the farm’s weed control program allows skilled farm staff to spend their time doing more interesting work with their trade or other skills, rather than the boring job of operating a spray rig in fallow.

Along with the many other benefits, Jamie considers Victor and November to be the safest spray ‘operators’ in the business because they start and stop spraying in response to the weather conditions as detected by the on-board weather station.

“The robots will not deviate from the set weather parameters,” he says. “A weather app is being developed and will soon be available to monitor and record the whole spray operation and weather conditions at the time of spraying.”