Karl Raszyk and his operations manager Robert Hughes at Dolany Farms, Scaddan WA take a proactive approach to adoption of new ideas in farming and several years ago they saw potential in the chaff tramlining system to help manage herbicide-resistant weeds.

The wet winter in 2010 led to a blow-out of annual ryegrass numbers at Dolany Farms but this also coincided with the introduction of chaff tramlining, using the Emar Chaff Deck at harvest. Although the consequences of the seasonal conditions in 2010 took about four years to clean up, Robert believes that using the chaff deck that year, and ever since, enabled them to ‘nip the problem in the bud’.

Convinced of the value of harvest weed seed control, Karl and Robert wanted to avoid the additional labour required to burn chaff heaps. They also felt that the chaff deck system would be easier to manage at harvest, particularly when they rely on a high number of casual workers, including harvester operators, during the harvest period. 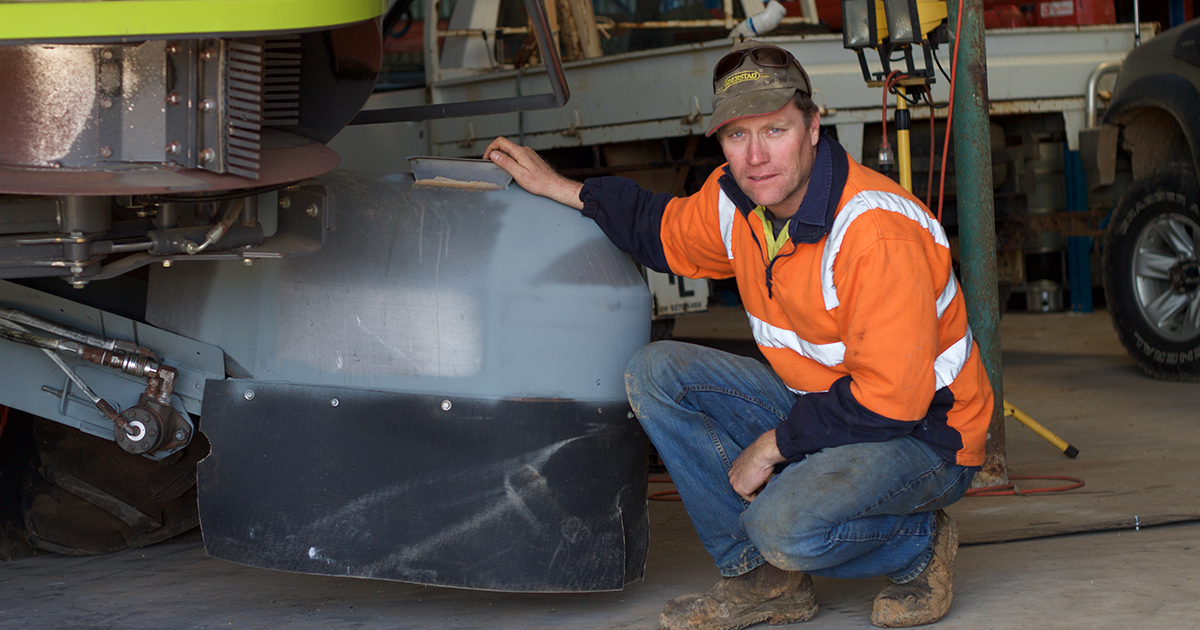 Robert Hughes, operations manager at Dolany Farms north of Esperance says the introduction of the chaff deck system in 2010 has helped them regain control over herbicide resistant ryegrass.

“With the chaff deck installed there is nothing else for the operator to do other than keep an eye on the header height,” says Robert. “The harvester cuts at a height of 100–125 mm, or lower if necessary, to put as much biomass through the harvester and onto the chaff deck as possible. The chaff component containing a high percentage of the weed seeds present at harvest is delivered directly onto the controlled traffic (CTF) tramlines while the rest of the material is chopped and spread by the spreaders.”

The chaff in the tramlines composts down and minimal weed seeds germinate in the hostile environment. Having the rest of the crop residue spread across the paddock avoids some of the potential problems associated with nutrient removal or relocation that occurs with some other harvest weed seed control options. The system is well suited to both wheat and canola crops so is used across the whole 9700 ha cropping program every year.

The chaff deck delivers the chaff component into the CTF tramlines behind the header, confining the weed seeds to a very small portion of the paddock. The chaff composts away and very few weed seeds germinate.

“The chaff deck has not enabled us to reduce our herbicide usage but it has avoided blow-out years and our herbicide program is aimed at maintaining low weed numbers,” says Robert. “One unexpected benefit from this system is that the chaff layer in the tramlines prevents dust being stirred up, making subsequent spaying operations more effective.”

“Although the chaff deck was a great addition to our weed control program we also benefitted from the release of Sakura and Boxer Gold herbicides at around the same time,” he says.

All crops are sown using a Morris contour drill on a 27 m toolbar suited to controlled traffic, on 302 mm (12 inch) row spacing. The planter enables precise placement of seed and fertiliser in the most efficient parallelogram formation to maximise crop competition.

The planter performs well in full stubble retention systems and Robert runs a disc on either side of the tramlines using a razor module that bolts onto the standard bar of the planter. This overcomes the problem of potential blockages caused by the chaff.

“We sow in the tramlines to avoid having a gap in the crop that might encourage weed growth,” he says. “The crop plants don’t perform particularly well in the tramline but the more shading we can provide to reduce weed growth the better. With ryegrass now confined to the tramlines we apply herbicide across the whole paddock, to maintain our low weed numbers. If necessary the tramlines are sprayed out using a shielded sprayer, but this is usually only done to be certain the paddock is clean enough to be harvested for seed.”

The tramlines are sown mainly to provide some shade to suppress the growth of any weeds that establish from the chaff.

Seed is taken from the cleanest paddocks and cleaned on-farm by a Hannafords contract seed cleaner to remove as much weed seed contamination and small grains as possible to ensure the best results the next year.

The crop rotation is generally two wheat crops followed with canola. Robert says they have also tried to include barley but find it difficult to achieve the quality standards required for malting. Round-up Ready RT 425 canola hybrid was sown in paddocks with the highest level of herbicide-resistant ryegrass in 2016 to reduce their reliance on clethodim. This hybrid is taller than many other hybrids, providing greater weed competition, and allows two in-crop applications of glyphosate.

All crops are sown in paired rows with Flexi N applied at planting. This system has seen an improvement in canola establishment, particularly in early sown crops and on non-wetting sands. This configuration is well suited to inter-row sowing using a 150 mm offset with an auto-steer control on the bar to maintain accurate row alignment.

Herbicide-resistant annual ryegrass was a major problem weed on Dolany Farms but it is well under control now, however wild oats and brome grass are providing new challenges. Having previously managed farms in other districts in WA, Robert is surprised that wild radish is not really of great concern in the Esperance area, perhaps due to the wetter and milder growing conditions.

The end of harvest in mid-November marks the beginning of the summer spraying program. Robert uses a mix of glyphosate and 2,4-D ester to manage broadleaf weeds such as fleabane, milk thistle and melons, usually with three sprays applied over summer. In wetter seasons he often uses a double knock treatment on fleabane and marshmallow, which can be more difficult to manage.

The double knock is then implemented seven to ten days before sowing, usually glyphosate followed with a paraquat and a relevant pre-emergent mix as the second knock. Pre-emergent herbicide is applied in front of the seeder – Sakura in wheat, Boxer Gold in barley and treflan in canola.

Diflufenican (e.g. Jaguar) is used for broadleaf weeds in cereals, where Robert finds marshmallow to be their most difficult in-crop weed. No selective post-emergent herbicides are used on ryegrass in the cereal crops. Most of the canola sown is an open-pollinated TT hybrid that usually yields around 1.5 t/ha. A combination of atrazine, clethodim and Targa is used to manage grass weeds in TT canola.

“With low weed numbers we now have more management options to choose from and can avoid the higher risk chemical options,” he says.

Soil acidity is a constraint to crop production in the Scaddan district, allowing weeds a competitive advantage. Karl and Robert use variable rate technology (VRT) maps to identify areas on the farm that require lime.

“We apply 1.5 to 2 t/ha of lime and see a response in weed numbers and also a better response to herbicide,” says Robert. “In other paddocks we have heavy clay soils where we need to manage boron toxicity using gypsum at rates of 500 kg/ha up to 3.5 t/ha to improve the yield and competitiveness of cereals.”