A diversified cropping system requires great attention to detail and offers many opportunities to implement several tactics in an integrated weed management strategy. 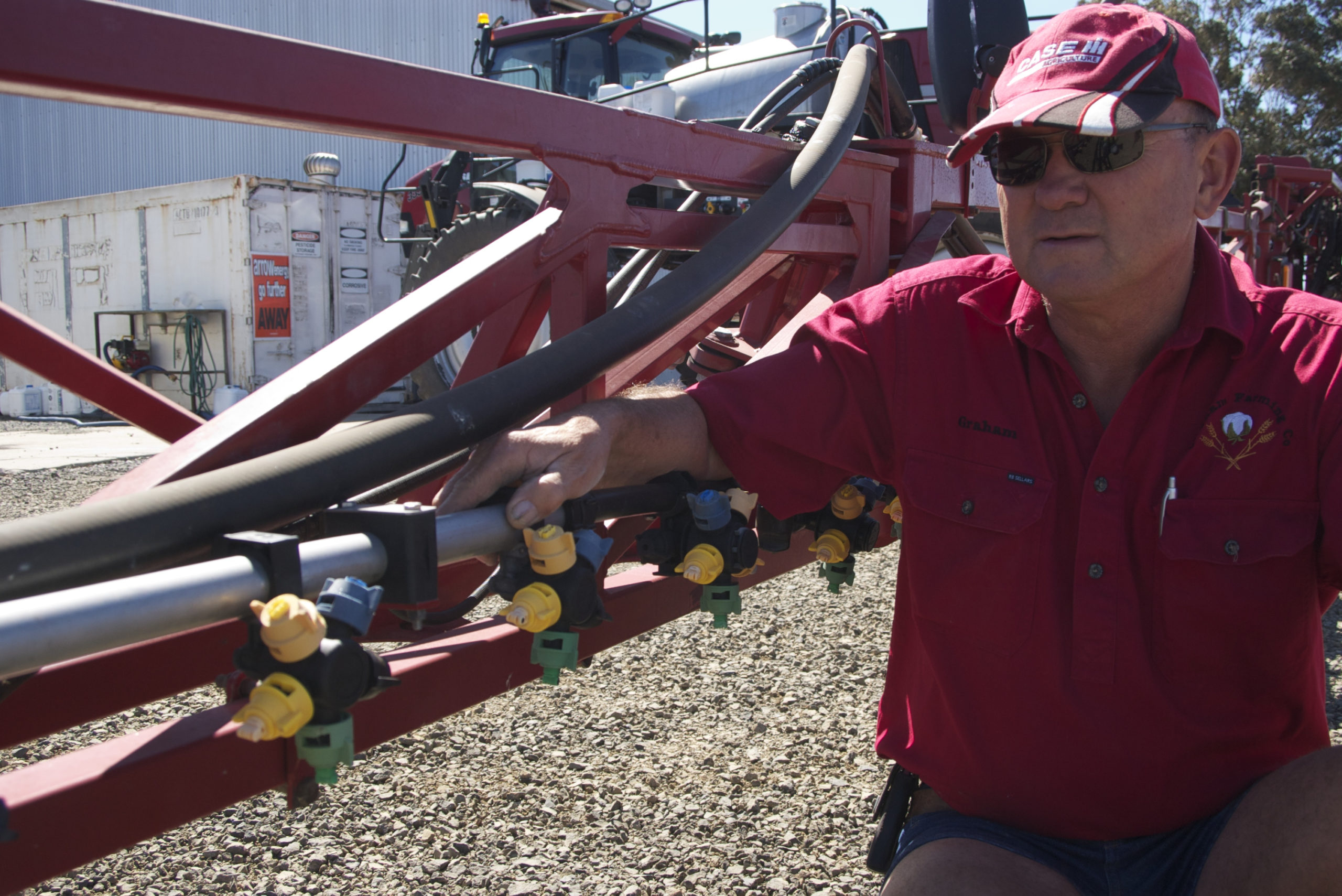 Spray application technology like these multiple-nozzle fittings make it quick and easy for the operator to change the nozzle type if environmental conditions change during the spray operation. The Claphams have placed the nozzles on their spray rig close together (250 mm apart) to maximise coverage and minimise drift.

Graham Clapham started his farming career straight out of school at 15 years of age. Even then he was clear about his desire to own a black soil farm on the Darling Downs. Graham grew up on his parent’s 200 ha mixed cropping farm, growing irrigated and dryland crops including corn, soybean, wheat, sorghum, onions and pumpkin.

With help from his parents, Graham realised his first goal when he was 18, purchasing a farm of his own at Norwin, west of Toowoomba. He now grows mostly irrigated cotton, corn and wheat and dryland cotton, wheat and sorghum on the family’s 1840 ha aggregation in the Brookstead–Norwin district.

On the 700 ha that is usually irrigated each year Graham has two main rotations—irrigated cotton or corn followed with irrigated wheat then a long fallow before returning to cotton or corn. In the corn–wheat rotation there is no cultivation but Graham has different herbicide options available and an opportunity to provide a disease break to combat fusarium wilt.

Rainfall dictates the dryland crop rotation on the rest of the cropping area. Minimum till is practiced to conserve soil moisture with occasional cultivation only to renovate the tramtracks.

Graham is aware of the risk of herbicide resistance, particularly in weeds like flaxleaf fleabane and feathertop Rhodes grass, which have always been hard to kill with glyphosate, and milk thistle is a new concern for the business.

Since the introduction of genetically modified cotton in 1996, the Claphams have practiced pupae-busting cultivations to manage resistance in helicoverpa. This has had the spin-off benefit of keeping hard to control weeds like flaxleaf fleabane and feather-top Rhodes grass under control.

“Pupae busting is a robust cultivation to a depth of 100 mm and is required to remove all large soil clods,” he says. “It must be done before the end of July following the cotton harvest in April–May.”

The deep cultivation after cotton buries weed seeds deep in the profile where they can’t germinate. Unfortunately flaxleaf fleabane seeds remain viable for longer when they are buried than when they are close to the soil surface. This means cultivation in subsequent years can bring viable seed back to the surface where it can germinate so it is not a complete solution but another useful tactic in the farming system.

The cultivation leaves the soil dry and prone to erosion so the Claphams aim to sow a wheat crop after cotton to provide ground cover over winter and stubble for the following summer.

Soil moisture and irrigation water availability govern the sowing rates used although the Claphams have two options when it comes to row width in their dryland crops. When sowing wheat into cultivated soil after cotton they can use an air seeder to plant rows 150 mm apart rather than the single disc planter used in minimum till planting to sow 500 mm rows.

Sowing in narrow rows has several benefits for weed control in the dryland system. To begin with sowing is a full tillage operation that removes any weeds present at the start of the season. The increased shading of the inter-rows suppresses weed germination and after harvest there is more stubble left on the ground, again suppressing weed germination.

Infrastructure such as channels and pump sites are kept clean throughout the year to avoid the risk of weeds spreading throughout the farm in irrigation water.

Graham has not noticed a yield difference between crops sown at the narrow and wider spacing although the air seeder does dry the soil out more than the single disc planter.

“The wheat crop is often not great, especially if winter rain is scarce,” he says. “But it provides good cover and we can use different chemistry to control weeds, especially to achieve a residual effect on flaxleaf fleabane.”

Graham says the chemistry available for use in wheat is very effective, keeping the wheat crops quite clean. Corn can experience some late grass germinations, which they have previously treated with glyphosate at harvest and then burnt the stubble.

When there is additional water available for irrigation early in the year the Claphams often take the opportunity to plant soybeans. Having this as an option they are conscious of the residual action of the herbicides used in the previous wheat crop. “We use herbicides with no residual effect to control broadleaf weeds such as thistles and turnip in the wheat so we don’t need to worry about the plant back period for soybean,” says Graham.

So far the Claphams have not experienced any spray failures that have raised concern about herbicide resistance. Graham is very conscious of the potential risk and is mindful of the experience in the USA with widespread glyphosate resistance in their cotton industry.

“Glyphosate-ready cotton has been a positive innovation for the industry, making it more sustainable and ending the use of environmentally-harmful herbicides,” says Graham. “However, glyphosate does not give 100 per cent control of weeds in cotton. Vines particularly can survive a spray and so we use inter-row cultivation and hand chipping to remove vines as needed.”

Inter-row cultivation in cotton, corn and sorghum also helps maintain the furrow profile and to conserve moisture before the canopy closes. Graham occasionally uses an inter-row shielded sprayer to apply glyphosate in corn and sorghum crops.

The Claphams recently purchased a neighbouring farm with a very heavy weed burden. They have used cultivation and herbicides to drive down the weed seed bank and to treat weeds they have never seen in the area before.

The Claphams do all their own spray operations, mainly so they can control when they spray. “The Darling Downs region is closely settled and there are not many trees across the cropping area. It can be very difficult to find suitable times to spray without the risk of off-field impacts. Having our own gear and labour available means we can spray as soon as suitable conditions prevail.”

Spot spraying larger weeds that have escaped earlier treatment is the last operation before plating clean seed into clean paddocks with clean borders (#8 in the 10 Point Plan).

Graham’s son-in-law, Jonathon Mengel, is responsible for the spraying operations across the farms. They have found that having a person with the designated responsibility to have the chemicals in stock and be looking for spray opportunities has been very beneficial to their operation.

“We have very few weed escapes after a herbicide spray,” says Graham. “On the rare occasion that it does happen we prevent seeding using tillage or a follow-up application of a knockdown like paraquat.”

“In the fallow we look for opportunities to do a double-knock treatment but it can be very difficult to get favourable conditions for two sprays close together,” he says. “Glyphosate, Starane®™ and MCPA®™ are relatively easy to apply using air induction nozzles to splash the product on with minimal risk of spray drift. The second application of paraquat 10 days later is more difficult, especially given the need to apply a fine droplet size.”

The Clapham’s Case Patriot sprayer, with its 36 m boom and 4 m wheel base, fits perfectly into their on-farm control traffic system. They have doubled the number of nozzles on the boom, placing a set of nozzles every 250 mm instead of the traditional 500 mm, allowing greater coverage and helping to extend the tight spraying window.

“This gives us a double overlap so we can consistently use coarse droplet nozzles and still get coverage, and it also enables us to operate lower to the ground,” he says.

When necessary Graham will spot spray or hand rouge weeds prior to planting the next crop to ensure the paddocks are as clean as possible going into the season.

The Claphams are also careful to keep irrigation infrastructure such as head ditches, supply channels and tail drains weed free. They use residual herbicides at high rates to effectively sterilise the soil in these non-cropping areas. “The risk of distributing weeds throughout the farm is of great concern and maintaining weed-free infrastructure is a year-round priority for us,” says Graham. “We also pay attention to planting clean seed each year, buying in cotton, sorghum and corn seed, and grading the wheat seed we keep the next season.”

“Black oats has been a bad problem in the winter cropping program but we seem to have won the battle with a consistent approach to planting clean seed.”

Throughout the crop rotation the Claphams are looking for ways to manage weeds to achieve the best possible productivity and profitability in the long term from their cropping operation.