A changed attitude to weeds has been driving brothers Malcolm and Des Kohlhagen to implement a comprehensive management program on their farm near Wagga Wagga in southern NSW.

Fifteen years ago the Kohlhagens assessed their weeds in terms of their likely economic impact but their mindset has changed to a much lower tolerance of weeds and they aim to keep numbers low year in, year out. 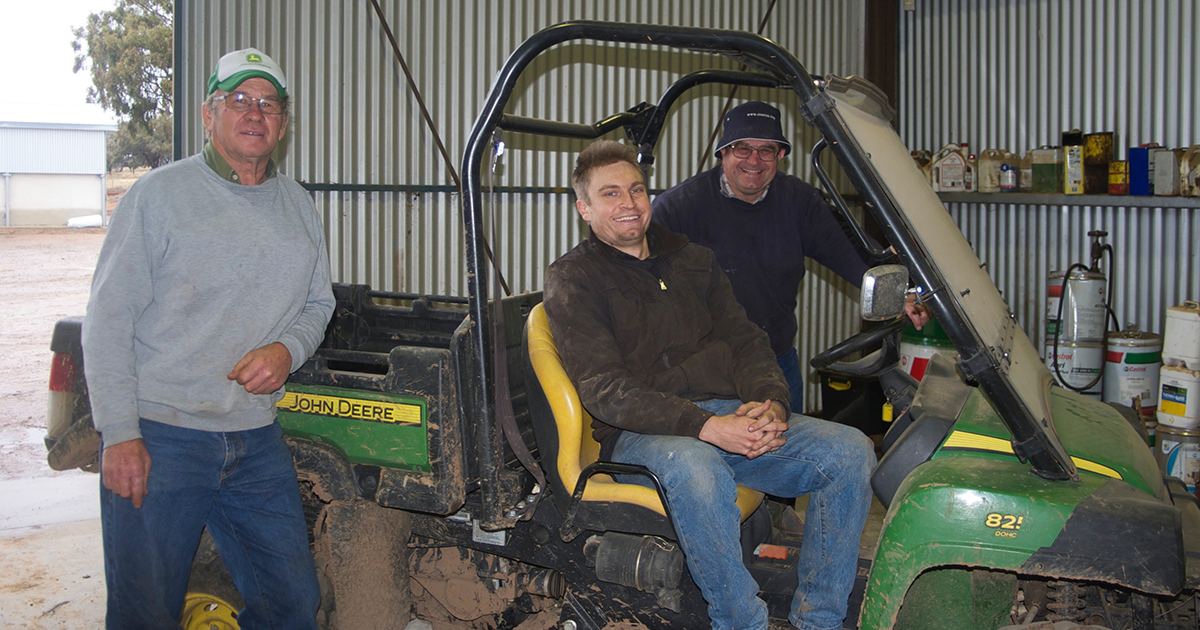 Brothers Malcolm (left) and Des (rear) Kohlhagen along with Malcolm’s son, Adrian (centre), have developed and implemented a comprehensive weed management program for their 100 per cent cropping operation in southern NSW.

The sheep have all gone from their 1600 ha operation and the family has expanded their cropping program to include a wider range of crops. The winter program now includes wheat, barley, canola, albus lupin and, most recently, faba bean.

Malcolm and Des use break crops to introduce a different range of herbicides into the rotation and a double break of a pulse followed with canola provides two years of grass control so the cereals are sown into clean paddocks. The Kohlhagens have stuck to their crop rotation even when many other growers in the district reduced their canola hectares during the 2000s.

They grew field peas many years ago but gave them away due to harvesting difficulties, and now find lupin and faba bean are a better fit in the rotation, providing a definite nitrogen boost for the following canola crop.

Triazine tolerant (TT) and Clearfield canola are used to rotate chemical modes of action. The Kohlhagens don’t currently consider RoundUp Ready canola an option for them due to delivery point and marketing issues.

Canola crops are windrowed to aid in harvest management and, from this season, will be crop topped under the cutter bar to capture any late escaping weeds. The Kohlhagens also plan to crop top their pulse crops in years where late escapes are a problem.

A narrow windrow chute is used on the harvester to collect weed seed in the pulse and canola crops and the narrow windrows are burnt to kill any seed present. This means over 40 per cent of their cropping area is subject to this very effective non-herbicide weed control method, particularly for annual ryegrass.

A double break crop of a pulse crop followed with canola provides excellent grass weed control, including narrow windrow burning, before returning to cereals in the rotation.

The brothers do not narrow windrow burn their cereal crops because of the high stubble load from barley and wheat crops yielding up to 6.5 t/ha and 5 t/ha respectively. When grown back to back these cereal crops generate too much stubble to effectively confine the fire to the narrow windrows.

Getting the right conditions for burning is not always easy but the Kohlhagens believe it is worth doing and are looking forward to when they can justify investing in an integrated Harrington Seed Destructor so they can avoid burning, a practice that is not popular in town!

In years where weed populations increase for any reason, haymaking is an effective method to stop weed seed set. The Kohlhagens find their heavier soil types are more likely to be challenged with weed blow-outs so they target these areas for haymaking as a salvage operation when necessary, giving great weed management benefits in poorer seasons.

Malcolm and Des currently contend with ryegrass that is resistant to Hoegrass (Group A, fop) and are aware of similar resistance arising in wild oats and possibly wild radish on the farm. To keep wild radish numbers as low as possible they hand rogue plants in spring, to avoid any seed going through the header.

Further narrowing their row spacing to create greater crop competition is currently on the table for the family but until they have decided on the best option they are using high seeding rates, especially in the already-competitive barley crops. Blockages in the seeder and slug and slater damage to seedlings can create gaps in the rows, which provides the opportunity for weeds to flourish, and wider rows also allow more weeds to grow between rows.

Changing the seeding setup is quite an expense so the family is considering whether to reduce the spacing on their current tined seeder to 250 mm or to change to a disc seeder.

Even at 300 mm they are having trouble managing the stubble load so are hesitant to narrow the spacing much further, however the tined seeder allows them more herbicide options than can be safely used with disc seeders. On the other hand, they have been impressed with a 150 mm disc seeder they have seen operating in high stubble environments in South Australia.

Pre-emergent herbicides are applied in all crops for grass control. While clethodim is still providing effective control in canola the Kohlhagens are well aware that it may not continue to be an option in the future. To support the pre-emergent herbicides the Kohlhagens are sowing their canola and pulse crops early to encourage better establishment and more rapid canopy closure, reducing the opportunity for in-crop weed germinations after the residual effect has diminished.

Since moving from a mixed farming operation to 100 per cent cropping, Malcolm and Des have seen a change in the weed spectrum present on the farm, with less capeweed present and less movement of weed seed around the farm.

Not having livestock however has increased the need for more vigilance over summer to prevent weeds using precious soil moisture that may be the difference between finishing a crop and crop failure as the October rainfall is now less reliable. Fleabane is of particular concern in summers with higher rainfall seeing explosions in fleabane populations, which may require double knock treatments.

Hairy panic is another persistent weed that must be sprayed when small to achieve effective and economical control. To manage broadleaf weeds the Kohlhagens use a low volatile 2,4D ester spike in glyphosate sprays applied over summer. Milk thistle is another emerging weed that is taking advantage of the no-till farming system.

Prior to harvest Malcolm and Des inspect their paddocks to identify the cleanest areas of each variety suitable to harvest for retained seed. They then use a low capacity seed grader to remove small or damaged seed and as much weed seed as possible from their seed before storing on-farm.

A mobile grader is contracted to grade the pulse grain for marketing and to thoroughly clean the pulse seed retained for sowing.

Malcolm and Des are clearly on top of their game with their weed management program but they are also full of praise for their agronomist, Greg Condon from Grassroots Agronomy, who provides excellent agronomic advice and keeps their herbicide program up to date.