Preserving the option for opportunity cropping is critical for Rolleston grain grower Kurt Mayne, but this means he needs to be careful with pre-emergent herbicides in his fallow weed control program.

Kurt and his family operate a 6000 ha mixed farming operation of dryland grain production and backgrounding steers for feedlots at ‘Broken Plains’, 13 km east of Rolleston in Central Queensland. They grow chickpea and wheat every winter and summer crops when the opportunity presents on the 1400 ha of farmed country previously used for finishing cattle on leucaena (AKA tagasaste). 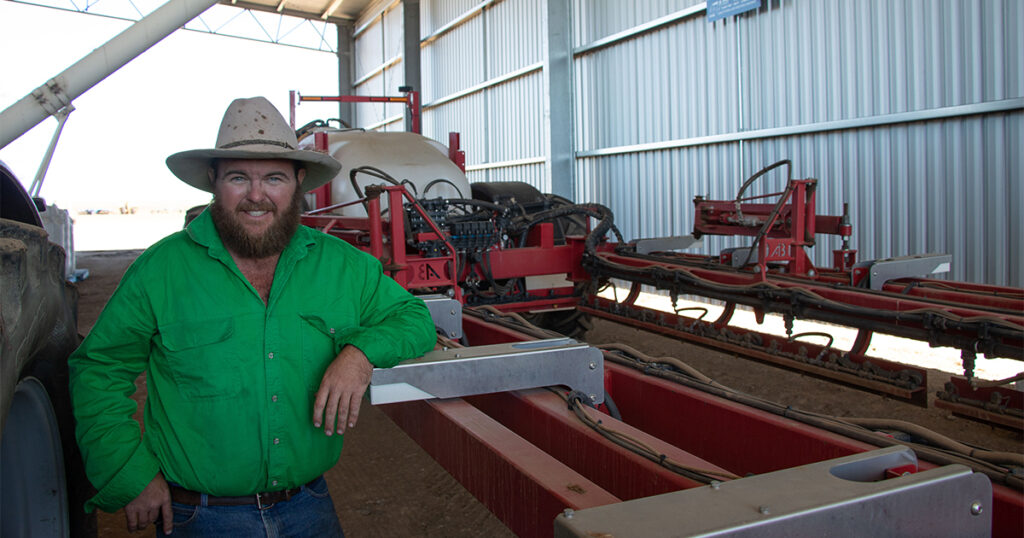 Wanting to keep one step ahead of herbicide resistance, Kurt took the opportunity to join a GRDC Grower Solutions study tour that included attending the 3-day WeedSmart Week event in Narrabri in 2018.

He returned from the tour convinced that he needed to take extra steps to minimise the risk of herbicide resistance before it began to impact on his crop choices and profitability.

“Optical spraying technology was the tactic that really stood out for me on the study tour,” says Kurt. “We bought a weedIT boom soon after I returned from the trip and I have been impressed with the benefits that have come with the addition of an optical sprayer to our weed control program.”

“In our farming system it is hard to incorporate pre-emergent herbicides in the fallow because that can restrict our options for opportunity cropping over summer,” he says. “The optical sprayer makes fallow weed management much more effective, and when that’s combined with pulses in the rotation we are able to keep on top of grass weeds like feathertop Rhodes grass, which was getting increasingly difficult to manage.”

The main weeds at ‘Broken Plains’ are feathertop Rhodes grass (FTR), milkthistle and fleabane – all notoriously hard to kill in fallow situations. Kurt bought a secondhand 36 m weedIT in early 2019 and can now spot spray their entire cropping area within two days. He also uses a tow-behind sprayer for their broadacre spray applications.

Kurt says the pressure from FTR had led to an increasing need for cultivation to stop seed set and he saw that optical spray technology would mean he could reduce the amount and frequency of cultivation.

“We use the weedIT to spot spray weeds with a double knock of glyphosate plus a Group I [Group 18], followed with paraquat; targeting these hard to kill weeds when they are small,” says Kurt. “No residuals are used in fallow because they can limit our options for summer cropping particularly.”

“The aim is to keep the fallows weed-free so we have low weed numbers at planting,” he says. “Once a crop is planted we do use residuals to give it the best chance to grow ahead of any weeds that might emerge on the planting rains.”

The weedIT has markedly reduced the amount of chemical applied in the fallow and reduced the time needed to do an application across the cropped area. Kurt is finding it much easier to apply the double-knock tactic for glyphosate within the optimal timeframe.

“Being able to get a proper double-knock done when you need to, means you can get on with other jobs, knowing that you have done the best control treatment possible on the weeds,” says Kurt.

Crops and varieties are chosen to maximise yield potential and this also means there is maximum suppression on weeds. Their crops are sown on 50 cm row spacing in a 12 m controlled traffic system, except for sorghum, which is grown on 1.5 m spacing.

“We are basically farming moisture here, so if there is suitable rainfall we want to be in a position to take that opportunity to plant,” he says. “Sorghum and mungbean are the usual summer crop options, and we aim to be cropping for 10 months of the year if conditions allow.”

In drier years the winter crops are sown deep, about 15 cm, to access available moisture. Chickpeas are particularly well suited to moisture seeking planting techniques. Kurt grades his own chickpea and wheat seed to remove weed seeds and ensure that the largest and most vigorous seeds are planted. He buys in mungbean and sorghum seed each season to maximise seedling vigour and establishment, and ensure the seed is weed-free. 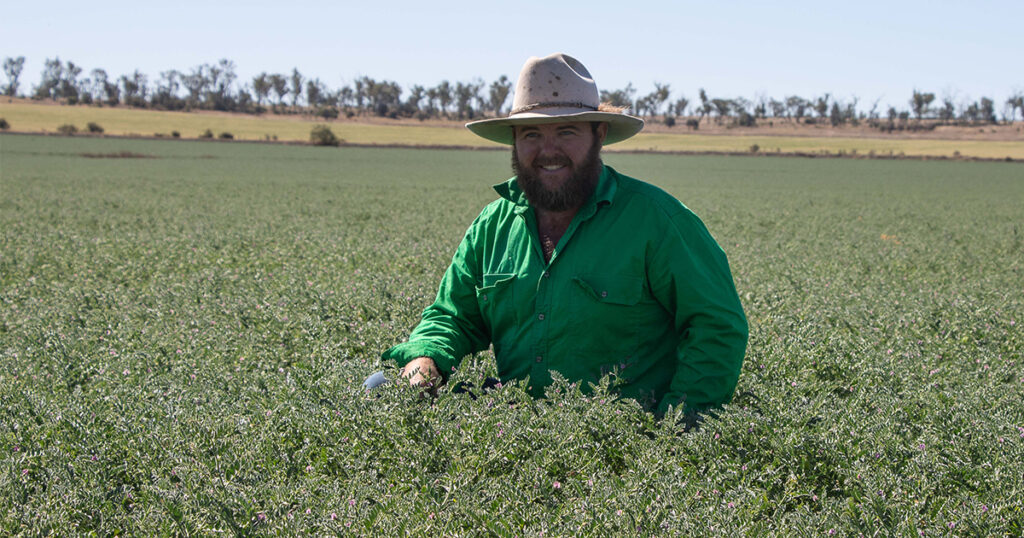 Chickpeas are particularly well suited to moisture seeking planting techniques. Kurt grades his own chickpea and wheat seed to remove weed seeds and ensure that the largest and most vigorous seeds are planted.

Kurt uses a tyned planter and a single disc for nitrogen application. He has recently embarked on a program to apply ‘deep P’ across the cropped area. The phosphorus is applied about three months before planting at a rate of 250 kg/ha MAP at a depth of about 30-45 cm using a dozer. He has been very impressed with the crop response to the phosphorus application, which has clearly demonstrated that low phosphorus levels have been a constraint on production.

The Maynes are seriously considering adding harvest weed seed control to their weed management program. Kurt sees real benefits in the chaff deck system that delivers the chaff onto the tramlines – both as a weed control tactic and a means of reducing the frequency of tram line renovation.

On the cattle side of their business, the Maynes buy in about 1600 feeder steers and run them for less than 12 months on 2800 ha of buffel and leucaena pasture.