An optical sprayer and disc chain combination has proved to be very effective in keeping weed numbers low on the Wise family farm at Bowenville, on Queensland’s northern Darling Downs.

Lance and Fallon Wise and Lance’s parents, Murray and Janette crop 1600 ha and run cattle on 45 ha of non-arable rocky ridges. The locality and soft black plains enable the Wises to grow a range of crops including sorghum, mungbean, chickpea, barley and wheat, along with the occasional crop of faba bean, millet and canola. 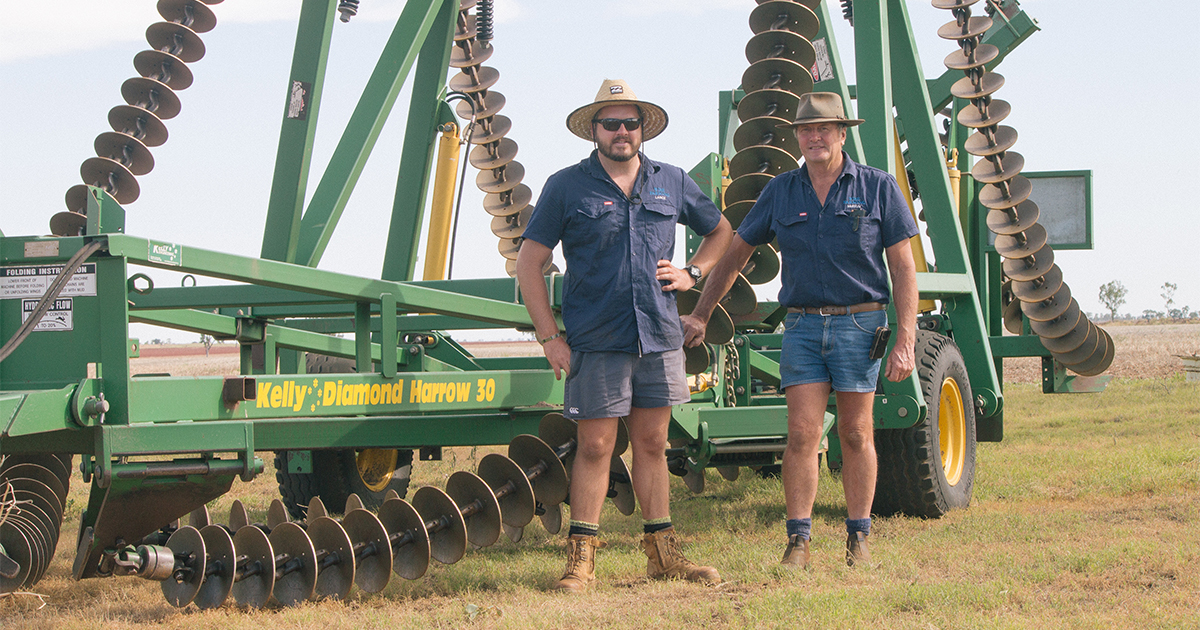 In an effort to reduce their reliance on glyphosate and overcome some of the disadvantages of long-term no-till farming, the Wises have reintroduced light cultivation and are moving toward more targeted application of glyphosate and other herbicide products using an optical sprayer.

“Our usual rotation is a legume followed by a cereal, such as mungbean, to sorghum and chickpea to wheat or barley,” says Lance. “We use either a short fallow or double crop to change from a winter to summer crop program and aim for at least one crop every 12 months from each paddock.”

Having been no-till farming for 25 years the Wises have seen the weeds transition to those species that proliferate in the absence of cultivation; weeds like fleabane, urochloa, feather top Rhodes grass, cow vine and bladder ketmia.

In an effort to reduce their reliance on glyphosate and overcome some of the disadvantages of long-term no-till farming, the Wises have reintroduced light cultivation and are moving toward more targeted application of glyphosate and other herbicide products using an optical sprayer.

Nine years ago they had success using the Kelly disc chain to manage urochloa on their less well-structured red earth soils. More recently they have used this implement to target herbicide tolerant feathertop Rhodes grass and fleabane on their main black clay soils.

“We are using a chemical / tillage double knock to good effect on feathertop Rhodes grass in the fallow,” says Lance. “We apply glyphosate and then follow up five days later with the Kelly chain, which does a terrific job of pulling out sick, dead and small plants at an operation speed of 11 to 12.5 km/hr.”

“The same system works well on fleabane too, pulling up plants with foot-long roots from soft soil, although a higher rate of glyphosate is required. It doesn’t work well for weeds like prairie grass that have deep, fibrous root systems.”

The Wises have found the chemical / tillage double knock to work well on feathertop Rhodes grass and fleabane.

Used in reverse order, Lance has found the light cultivation is an effective way to stimulate germination after a poor sorghum crop to sprout volunteers and then spray out the crop.

Along with the benefits of partial stubble incorporation on soil microbial activity and ease of sowing, Lance says the two short chains in the middle fill in the 3 m wheel track to even out the paddock, avoiding the need to do extra wheeltrack renovation operations.

About the Kelly chain

“We also use the Kelly chain to incorporate pre-emergent herbicide after sowing to a maximum depth of 2 cm. This does not disturb seed, which is all sown at least 4 cm deep with a presswheel, and the soil is moved sideways without destroying the cracks in the soil or drying out the profile,” he says. “Weed seed is not buried deeply so it doesn’t come back to haunt you years later.”

Lance avoids using the Kelly chain more than once in a season on the red soils, which can get very dusty and are prone to hardsetting on the surface.

At the end of harvest Lance and Murray assess the stubble load and weed pressure in each paddock. They usually spray glyphosate after a rain event and either double knock with the Kelly chain or spray paraquat through their Weedseeker optical sprayer.

After using the Kelly chain, Lance follows 30–45 days later with the Weedseeker rig to clean up any survivors.

“The Weedseeker is a new fallow option for us and means that we can treat weeds that we might otherwise ignore, apply higher rates, and use more expensive products to control small areas or patches of weeds,” says Lance. “The 36.6 m boom carries 96 sensors so there are not many weeds that go undetected in the fallow.”

At the end of last year, the Wises started sub-soil ripping to a depth of 35 to 40 cm on 75 cm spacing to increase water capture and break up the sub-soil compaction to improve crop growth.

Six weeks ahead of planting they apply the final glyphosate spray and then add fertiliser, which they incorporate with the Kelly chain, with the added benefit of removing any weeds present. Liquid fertiliser applied at seeding promotes early seedling vigour and growth, which gives the crops a competitive advantage over weeds.

They plant using a Tobin planter that achieves a good even strike in stubble, starting on the red soils as soon after rain as possible, then moving onto the black soils.

Being a spray contractor, Lance has also invested in an air boom on his sprayer that enables him to have much greater control of droplet size to match the environmental conditions, while also covering a larger area in a day.

He says the elliptical cone delivers spray in both a forward and rear motion to achieve better coverage, even at lower water volumes. The controls in the cab allow the operator to adjust the spray quality from fine to extra course without changing nozzles on the boom and there is no need to have all the different nozzles to suit different conditions and products.

The Wises operate a 12 m controlled traffic system and plant all their crops on 375 mm row spacings. Lance has increased the planting rate in sorghum from plants 40 cm apart in the row to 25–30 cm apart to quickly to shade the interspace and suppress weed growth.