Whether stubble is standing or laying flat on the ground it represents a challenge for farmers using pre-emergent herbicides to control weeds early in the cropping season.

Most growers and advisors are aware that products such as trifluralin are quite tightly bound if they contact stubble during application, however the behaviour of newer products has been largely unknown.

For pre-emergent herbicides to be effective the product must be placed in contact with the soil and must provide an even layer of chemical to intercept germinating weeds. Decisions at harvest will have a direct bearing on pre-emergent choices and efficacy for the next season.

Yaseen Khalil is a PhD candidate at the UWA School of Agriculture and Environment, studying the availability of pre-emergent herbicides applied to crop residue and then exposed to different rainfall simulations. 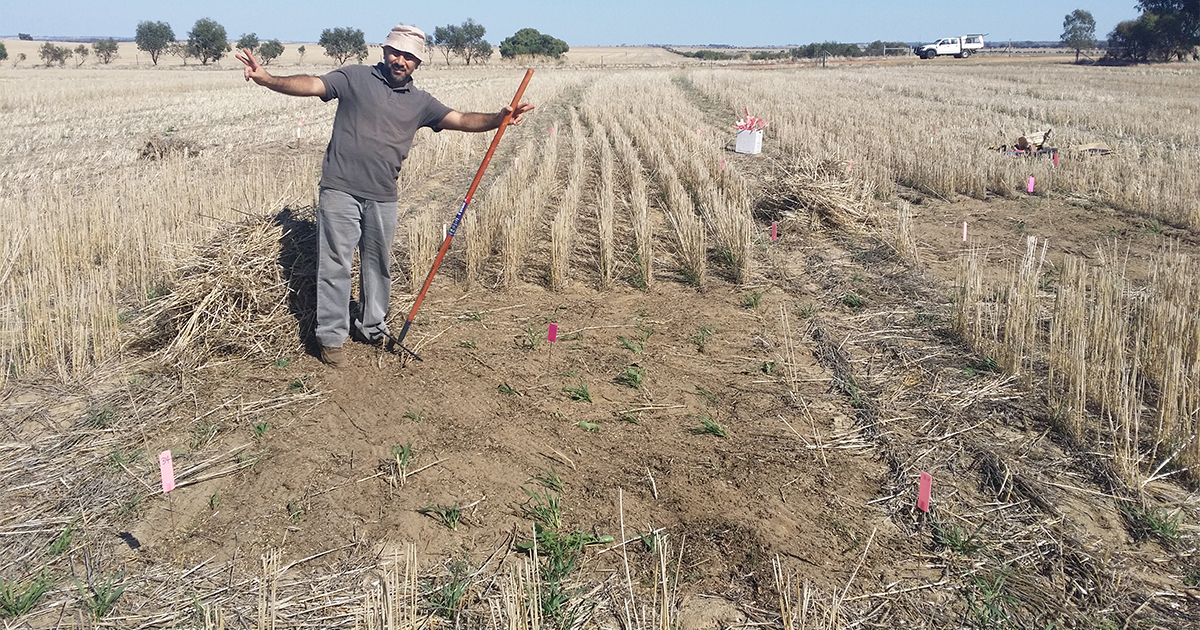 Decisions at harvest will have a direct bearing on pre-emergent choices and efficacy for the next season. Yaseen Khalil, PhD candidate at the UWA School of Agriculture and Environment, is studying the availability of pre-emergent herbicides applied to crop residue and then exposed to different rainfall simulations.

The three pre-emergent herbicides investigated were trifluralin, Sakura (pyroxasulfone) and Arcade (prosulfocarb). As expected, trifluralin was very resistant to leaching from crop residue with minimal amounts of the product washing off stubble in rainfall events simulated just one day after herbicide application.

On the other hand, a sufficient quantity of Arcade was leached by rainfall applied after 7 days to provide some control of annual ryegrass. Sakura was the clear ‘stand-out’ when it comes to efficacy of leachate. Product applied to 4 t/ha crop residue plots provided 100 per cent control of annual ryegrass when just 5 mm of simulated rainfall was applied 14 days after the herbicide application.

“The implications for growers are that they can rely on significant amounts of Sakura and Arcade being washed off crop residues and into the soil if there is a rainfall event of at least 5 mm within about one week of applying these pre-emergent herbicides,” says Mr Khalil. “If the crop residue is already wet when the pre-emergent herbicides are applied, the products are more tightly held and less product leaches off the residue in subsequent rainfall events, compared with spraying onto dry stubble.”

Mr Khalil’s supervisor University of Western Australia senior lecturer, Dr Ken Flower says an important factor to consider is the unevenness of residue spread at harvest. “While the residue level across the paddock may average out to an acceptable 3 t/ha it is common for the residue to be as high as 10 to 15 t/ha directly behind the header,” he says. “This in itself has implications when it comes to growers’ decisions about their weed management tactics.”

Australian Herbicide Resistance Initiative communication lead Peter Newman says getting the pre-emergent product through the crop residue and onto the soil at application time is still the priority.

“It is good to know that some products remain effective and can be leached off the crop residue with rainfall following the application,” he says. “Yaseen’s research has added to the growing knowledge bank about the most effective use of pre-emergent herbicides in no-till, stubble retention systems.”

Whilst quite extensive in itself, this study only compared three pre-emergent herbicides. The chemical properties of the over 50 active ingredients that possess pre-emergent, or residual, activity vary enormously, and they are found in 10 mode of action groups. The efficacy of these products relies on different environmental, soil and crop residue conditions.

“Understanding how these products can best fit into an integrated weed management program on a farm requires considerable thought, taking many, many factors into consideration,” says Mr Newman. “There are great opportunities to use these products to add diversity to weed management but it is essential that they are not over-relied on as 100 per cent weed control is uncommon, even when the conditions at application are as good as possible.”

Mr Newman recommends growers take the time to discuss a variety of options with agronomists and take on board research like Yaseen’s, along with their own observations, to build a robust and ever-changing weed management program. “The aim is to keep overall weed numbers low as this is the best way to minimise the risk of herbicide resistance,” he says.