Weeds growing along fences and other crop border areas are quietly gaining resistance to important knockdown herbicides like glyphosate, setting plenty of seed and are ready to move into neighbouring crops.

Dr Chris Preston, Chair of the Glyphosate Sustainability Working Group, says glyphosate products have been so effective for the past 15 to 20 years that many growers have relied solely on these products for weed control in their non-crop areas.

“The problem that has arisen is that any escapes – weeds that survive the glyphosate treatment – are able to flourish in an environment where there is little competition for moisture, nutrients or light,” he says. “This means they can set large quantities of seed and it doesn’t take much for this seed to move into the crop area, already highly resistant to a key herbicide mode of action.”

The other major problem that occurs is due to all weeds growing along the fenceline being treated with the same product. This means that weed species that already have a high tolerance to glyphosate, and are not listed on the product label, are able to gain a stronger foothold.

“This can be clearly seen along roadsides around the country where hard to kill grasses like feathertop Rhodes grass have become a dominant species,” says Dr Preston. “In situations where other weed control options are limited, it is difficult to contain the spread of these weeds.”

Fencelines and crop borders represent a significant threat to crop production due to the often-unnoticed evolution of glyphosate resistance in weeds.

What other options do I have for managing fenceline weeds?

Longer answer: Consider the situation, that could realistically arise, where glyphosate is not effective on any weeds present on the fencelines or crop border areas. What would you do? Making a change to how you manage the borders now could extend the useful life of glyphosate in your farming system. Herbicide resistance is best addressed by combining a variety of control tactics to drive down weed numbers and prevent seed set.

What other herbicides are a good option for fencelines?

Short answer: Herbicides that are not used in crop production could be valuable in maintaining clean borders.

Longer answer: One example is bromacil, a Group C herbicide that controls a range of both grass and broadleaf weeds. This herbicide is effective on small weeds post-emergence and also offers residual activity to suppress germinations. It would be best applied during the winter cropping phase when winter-growing weeds are small, rather than leaving treatment until August or September when the target weeds are large. In the northern region, spring is a good time to be targeting summer-growing weeds along fencelines. However, if you do have to use bromacil on larger weeds, it must be applied with an effective knockdown herbicide partner. Complete control of glyphosate resistant annual ryegrass has been achieved in trials using paraquat/diquat + bromacil and glufosinate + bromacil, applied post-emergent.

Bromacil can also be applied to bare soil to stop weeds establishing. Other residual herbicides currently registered, including simazine, fluometuron and imazapyr, all have recorded instances of herbicide resistance and so are not robust options for fenceline weed control. Flumioxazin is soon to be registered for application to bare ground and will offer growers another residual herbicide option without the risk of damaging trees. 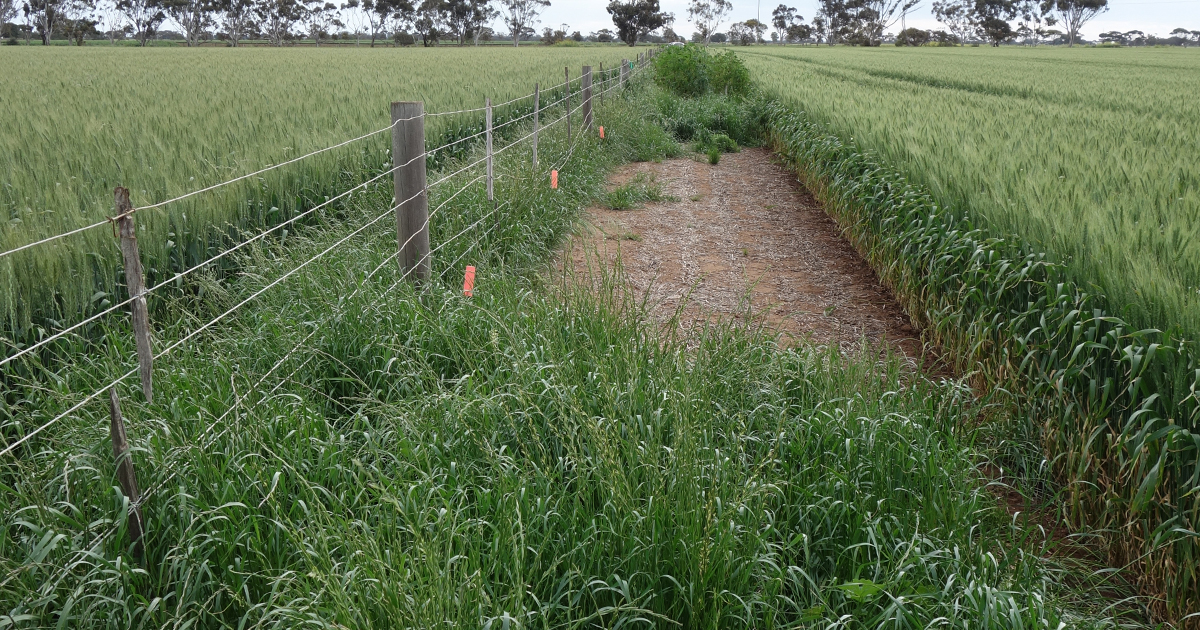 A new registration for flumioxazin to be applied to bare soil in non-crop areas will increase the residual herbicide options available to growers. This photo shows the efficacy of flumioxazin compared to glyphosate (front), four months after application.

What happens if a fenceline gets incorporated into a cropped area when I realign paddocks?

Longer answer: If fencelines are no longer required, removing them will make it easier to manage crop borders around the farm. Where crops are planted across old fencelines there is often additional weed pressure for the first few years. If possible, thoroughly clear away weeds during the paddock re-development and plan to grow very competitive crops in the first few seasons at least. The ‘fenceline effect’ is often observed for several years so it pays to keep the competitive pressure on.

Search this website for other articles about managing ‘fencelines‘