Mullewa growers Andrew and Rod Messina have been on a long and dedicated journey of weed management. Their 12 thousand ha dryland cropping enterprise is based on a predominantly sandplain soil type and the region generally expects 250 to 350 mm annual rainfall, but seasonal variability is often a challenge.

The most recent innovations to be tested and adopted are real-time and localised herbicide application technology and impact mills for harvest weed seed control.

The soils and rainfall limit the Messina’s crop choices but they use the available options of wheat, canola and lupins to their best advantage for herbicide and non-herbicide tactics to keep downward pressure on the weed seed bank. 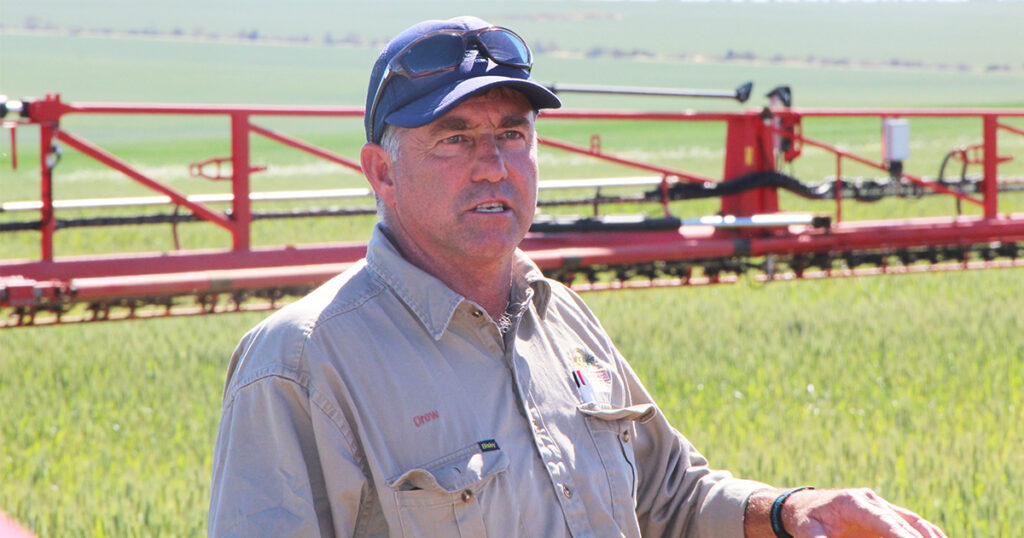 “We have been doing whatever we can to reduce the seed bank for weeds, and we’ve been doing that for a long time now, particularly with mouldboard ploughing and harvest weed seed management,” Andrew said. “Weeds rule broadacre farming, there are no two ways about that – weeds and rainfall.”

“We find that when we buy a new property it always has a lot of weeds but after two or three years of integrated weed management practices, including harvest weed seed control, it’s amazing how quickly weed numbers come down,” Andrew said.

Wild radish has always been the main weed challenging crop production on the Messina’s Spring Park Farms on the Eradu sandplain east of Geraldton. When herbicide resistant wild radish populations established on the farm the Messinas added pre-emergent to the in-crop herbicides in their weed management strategy.

In 2020 the family sold their collection of chaff carts and bought three Integrated Harrington Seed Destructors (iHSD) in anticipation of a harvest dominated by cereals across 10,000 ha. The impact mills performed well through the 2020 harvest and the Messinas are very pleased to have dispensed with burning chaff dumps for harvest weed seed control.

At the same time they have also moved into camera spot-spraying technology, initially for summer and fallow spraying but also for future potential for in-crop spot-spraying.

“To have mechanically driven weed destructing mills on our harvesters, and this camera technology … it’s the most exciting thing I have seen in my farming life,” said Andrew.

The system – called AiCPlus – uses optical cameras and microprocessors to identify weeds ahead of the 48-metre spray boom. Individual nozzles are then triggered as the boom passes overhead to spot spray the weeds. The cameras are fixed at 3 m apart, with each linked to the independent operation of nozzles within a set of 12 nozzles.

Green-on-brown is the only commercially available technology available for this machine at present, but the Messinas have been busy assisting the system’s developers to trial its green-on-green capabilities.

Arriving on farm in January 2020, a little later than expected, the Messinas used it to finish the summer weeds program on about 400 ha of their sandplain soils. Once the crops were planted, they then used it for nine days in young wheat crops in July and then again in August, traversing 14,000 ha at an average speed of 19 km/h. 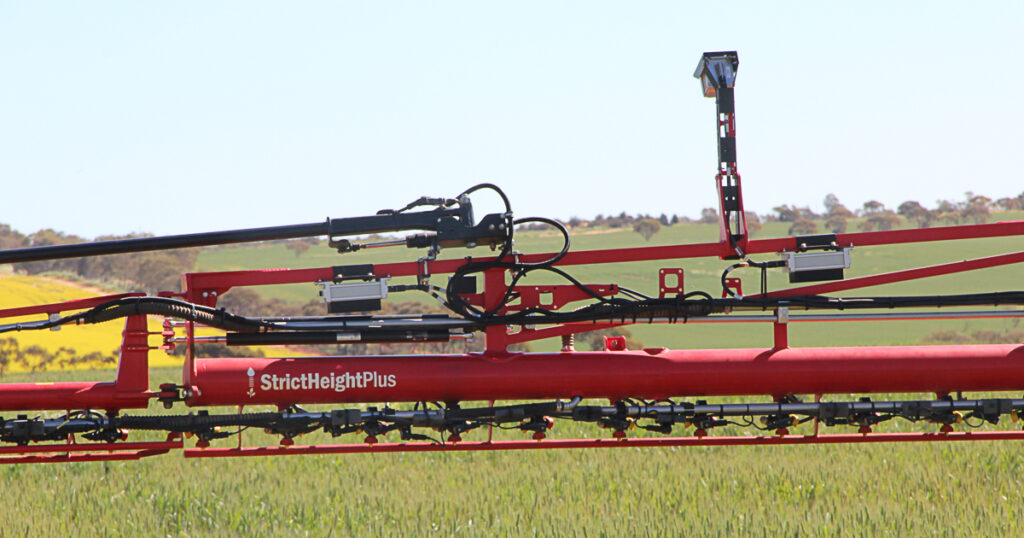 Its target was wild radish growing in paddocks of Scepter, Devil, Chief and Zen wheat. With each pass, the cameras captured images that depicted both the crop and weed at different times of day and under various light conditions. These images are being used to better inform the algorithm behind the technology. In 2021 the Messinas will be working with Bilberry to gather images to identify blue and white lupin in wheat crops.

For the trial, they had allowed the radish plants to grow to a size that the cameras could easily detect, approximately 10 cm2, with the sprayer first being put to work on a paddock with a high weed burden, something that they would not usually do.

In paddocks with high weed burdens, their aim is to knock out weeds early in their growth via a blanket spray, in a bid to conserve crop-available moisture. This would usually occur around the three-leaf stage in wheat.

Andrew expects the efficiencies from green-on-green technology to come in subsequent sprays that targeted the low number of radish plants from later germinations.

As a result of the family’s persistent weed-fighting efforts, most of their paddocks host only low densities of radish. In these paddocks, Andrew said a blanket spray would generally not be necessary.

Having the impact mills fitted to their harvesters gives the Messinas full confidence to be involved with the development of the weed identification and spraying technology because they know that any weeds that escape treatment will be destroyed at harvest.

“But when we were walking through the paddock, most of the weeds had been hit,” said Andrew.

The 48 m Agrifac sprayer runs on the same trams as the harvester rather than the trams used by their other sprayers. By going to a wider boom and operating at 19 km/hr they can get over the same area as their 36 m sprayers running at 26 km/h.

Testing uncovered pH levels of around 5.3 to 5.5 at the surface and 4.4 to 4.6 at depth (30 cm). Non-wetting properties and compaction were also identified as potential limiting factors.

They then embarked on a liming and mouldboard ploughing program to adjust the pH, treat non-wetting and bury weed seed. Their soils now feature pH levels in the range of 5.5 to 6.2.

“For the past five years we have been deep ripping to depths of 60 to 70 cm prior to seeding wheat to maximise the ability of crops to access moisture and nutrition in the profile,” said Andrew. “We also spread two tonnes of lime per hectare ahead of the ripper every three years.”

The overall result is better soil, better crop competition and less weeds. Andrew says the deep ripping has the potential to bring weed seed back to the surface, but this has only been evident on the edge of tram lines in a couple of paddocks where brome grass has re-surfaced.

Stopping seed set at every opportunity

The Messinas aim to stop seed set at every stage of the crop production and weed life cycle.

This case study is based in part on an original article written by Ann Rawlings with permission from the Society of Precision Agriculture Australia (www.spaa.com.au) and other sources.