Placing an emphasis on cultural weed control has been a major focus for Mic and Marnie Fels on their Wittenoom Hills property, 50 km north of Esperance WA.

The resulting low weed numbers means they can still use a wider range of ‘older’ off-patent herbicides, which helps keep herbicide costs to a minimum.

“We have tried to use herbicides as a back-up for our cultural practices, rather than the other way around,” says Mic. “Narrow rows, stacked rotations, burning windrows in canola and chaff lining all crops at harvest are the central components to our weed management, taking the pressure off our herbicide program.”

Noticing the early stages of triazine resistance was a significant motivator in implementing their weed management program, and Mic is pleased that the actions they have taken have ‘saved’ this valuable option.

“We bought this farm in 2002 having always farmed in the district, and although some of the older Group A and B herbicides are gone we have all other options, including triazine, and still get good results using the ‘old rates’.”

Mic and Marnie’s farming system is a great example of the Weedsmart 10 Point Plan in action – incorporating both herbicide and non-herbicide weed control strategies. 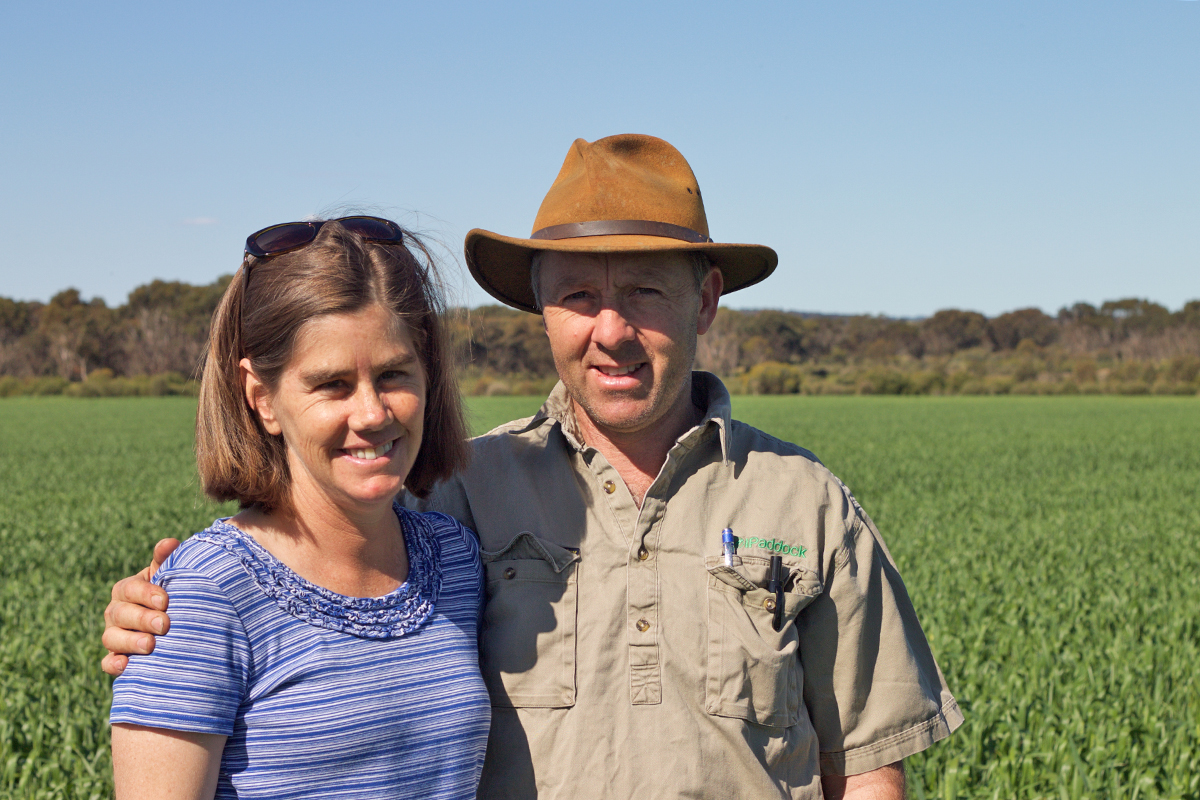 Mic and Marnie Fels have developed a farming system where herbicides are used to back-up their cultural practices, rather than the other way around.

What started as an effective disease management system, stacked rotations have also had long lasting effect on weed management and the Fels believe this strategy will be the key to improving the profitability of their new farm at Three Springs, WA.

“Our stacked rotation involves growing each of our three crops – canola, wheat and barley – for two consecutive years each rather than spreading them out in the rotation,” says Mic. “We grow canola for two years, then wheat for two years and barley for two years.”

This rotation provides a four year break for the diseases that affect each crop, namely black leg and sclerotinia in canola, crown rot in wheat and net blotch in barley. Mic says the system has eliminated crown rot, which was once a significant challenge on the farm.

At Three Springs Mic is planning to implement the same strategy but using lupins on the soils that are not as well suited to canola.

“In the canola phase we use an open pollinated TT hybrid in year one and an RR hybrid with a different and high blackleg resistance rating in year 2,” says Mic. “In the wheat phase, we have used Mace on Mace but will be moving to the newer ‘all-rounder’, Scepter. In the barley phase it’s Hindmarsh followed by La Trobe or Capstan in year 2.”

In the canola Mic aims for 100 per cent ryegrass control to set up the rest of the rotation with very low weed numbers. To achieve this, and to remove the excess biomass that accumulates in the chaff lines over five years, the Fels have introduced windrow burning in the second canola crop on top of all the other cultural and herbicide practices.

Canola plays an important part in the Fels’ weed management program. In the 2-year canola phase they implement strong crop competition, a broad range of different herbicide MOA, windrow early to collect as much weed seed as possible, concentrate the weed seed to a narrow line and burn the windrow in year 2, just to be sure!

Mic and Marnie sold the last of their cattle in 2012 and as a result stopped growing lucerne in their crop rotation. They were previously undersowing lucerne with Clearfield canola, which gave them solid stands of the perennial legume for very little cost. Mic would love to still have a legume in the system, but the economics currently don’t stack up on their Esperance properties.

Mic has used a modified version of chaff lining as their harvest weed seed control strategy. The idea is that the chaff component is funneled into a narrow strip in the middle of the CTF runs behind the header.

In a controlled traffic system this means that the weed seeds collected through the header are concentrated into the same zone every year and any seeds that germinate through the mulch are subject to the full force of crop competition. Similar to the experience of growers using a chaff deck to channel the chaff into CTF permanent wheeltracks, Mic finds that the chaff and the weed seeds simply rot away and there is no need to burn the chaff to gain the benefits of this weed control measure.

The $200 plastic chute fitted to the harvester funnels the chaff containing the majority of weed seeds present into a narrow band in the middle of the CTF run.

Mic views chaff lining as ‘an incremental tactic’, accepting the fact that a portion of the annual ryegrass seed will already be on the ground at harvest. Over time though he says the results are obvious when harvest weed seed control is implemented in every paddock every year.

“For us, chaff lining is working well. It only cost $200 for a plastic chute for the harvester and there are no moving parts to break or slow us down,” he says. “While early cutting is important it can’t be done across the whole farm, especially in wheat, so you have to accept that some paddocks will be harvested too late for optimal weed seed capture.”

“Even so, every year more and more weed seed is captured and composted in the chaff lines,” he says. “And you can still drop the header that bit lower when harvesting a grassy section of a paddock.”

In the second canola crop the Fels have started to burn the chaff lines to really tidy up the paddocks and avoid the possibility of weeds spreading out from the chaff line. Canola burns easily and provides a hot fire suitable for maximum seed destruction. This is particularly useful if they are planning to make changes to tramlines or are removing fences.

The chaff composts over time, killing most if the weed seed and any seedlings that do germinate are subject to stiff crop competition.

In 2011 Mic changed the row spacing from 30 cm (12 inches or ‘ryegrass heaven’) to 18.75 cm (7.5 inches). Whenever there is a gap in the crop Mic is reminded of what a big difference narrower row spacing has made to their weed control.

In changing to narrower row spacing Mic wanted to change from a tined to a disc seeder but was not 100 per cent happy with the disc seeders available. Being an engineer he set about modifying a John Deere seeder, which has since been commercialised after field testing in SA, WA and on his own farm.

“Finding a suitable bar was the most difficult part,” he says. “The seeder units have a single rippled disc rather than a flat disc and we have removed the gauge wheel to achieve better soil throw into the inter-row and eliminate blockages. This feature is very important for using pre-emergent herbicides on non-wetting soils.”

“The result is a simpler machine with less components – just the disc and the press-wheel,” says Mic. “Planting is a smoother operation with far less downtime or choking up with stubble.”

“Setting the harvester choppers to spread the stubble evenly is very important and can be difficult to do on older harvesters,” he says. “But accurate seed placement relies on even stubble spread so it is worth doing what you can to achieve this at harvest.”

Mic has invented and commercialised the Alpha Disc, a narrow row disc seeder that can operate very effectively in stubble, has fewer components and effectively throws the soil into the inter-row.

Wet years not so scary

The 2016 season was unusually wet and the Fels compare it to 2003, their second season farming at Wittenoom Hills, but they have been pleased to notice a big difference in the effect of wet weather on weed numbers.

“In 2003 we had such a large area infested with ryegrass that we were forced to salvage paddocks to hay,” says Mic. “This made us realise that weed management had to be a priority and we have put as many cultural practices in place as possible to lessen the effect of wet years where herbicides are not enough to cope with the ryegrass pressure.”

“Our system was thoroughly tested in 2016, another cold and wet winter, and the only areas where the ryegrass was an issue were where the crop basically died from waterlogging. Crop competition is just so important in this environment. After 13 years we still have most of the older chemistry available and all the new chemistry options up our sleeve.”

The Fels are now working on building soil nutrition to complement the narrower row spacing. They have increased phosphorus rates to support strong early growth to achieve the best crop competition effect, and are looking at going back to nitrogen application ‘down the tube’ for similar reasons.

“With full stubble disc seeding there is a greater risk of nitrogen applied on the soil surface being tied up in the breakdown of stubble,” says Mic. “I hate having to handle nitrogen fertilisers at seeding, but with our residue levels these days it may be the best way to get it into the plants early in the season.”

Something extra: How many consecutive cereal crops can you safely grow?

Mic’s farming system has been tested using the RIM (Ryegrass Integrated Management) analysis tool. The scenario tested was a double stacked canola rotation to control ryegrass and then growing four consecutive cereal crops (2 wheat then 2 barley) before rotating back to canola. The question being considered was ‘is this crop rotation plus herbicides sufficient to control annual ryegrass?’.

This RIM analysis result, and a similar one done in a low rainfall cropping environment, indicates that a grower can choose the crop rotation that best suits their farm, provided sufficient weed control measures are in place to prevent a blow out in ryegrass numbers. In these analyses, using harvest weed seed control every year was enough to beat ryegrass and keep the rotation going.

Peter Newman, Communication Lead at the Australian Herbicide Resistance Initiative says even on a farm where there is no weed resistance to glyphosate or pre-emergent herbicides, and using the best herbicides available, a blow out in ryegrass numbers would be expected in the fourth wheat crop following two consecutive canola crops if there is no harvest weed seed control.

“If the grower adds harvest weed seed control to their management every year then it is possible to grow at least four consecutive cereal crops while also maintaining ryegrass numbers at or near zero,” he says. “Returning to the two seasons of canola with ryegrass numbers still low is the ideal outcome for managing weeds and herbicide resistance risk.”

“It doesn’t matter what harvest weed seed control system you use, all that matters is that it happens every year. With all the weed control measures that Mic has in place, the system even works in the face of Group A and glyphosate resistance.”

Webinar discussing the use of a chaff deck system, similar in principle to Mic’s system.