What started as a drought mitigation measure for Horsham mixed-enterprise farmers Sam and Emily Eagle in 2015 has proven to be a valuable long-term livestock production and weed control tool.

You can listen to this article being read above!

Livestock containment areas allow the Eagles to rest their pastures and fodder crops, efficiently use a variety of feeds and restrict the spread of weed seeds. On top of this they have also seen benefits in growth rates and lambing percentages.

Sam says the six or seven hectares they have available for containment was not expensive to build and has made it much easier to manage their livestock and cropping enterprises.

“I’d definitely recommend building containment areas for sheep,” he says. “It is such a simple concept that has so many benefits. They really help to manage ground cover on your pastures and cropping paddocks, and in dry times they make feeding out much less stressful. In the last drought we had up to 6500 sheep in containment, including lambs, and I could feed them all in less than three hours, and didn’t have to feed every day.”

Sam and Emily use the containment areas for several purposes throughout the year. Although they generally keep their pasture and cropping paddocks separate, the sheep play an important role in weed management across the whole farm. 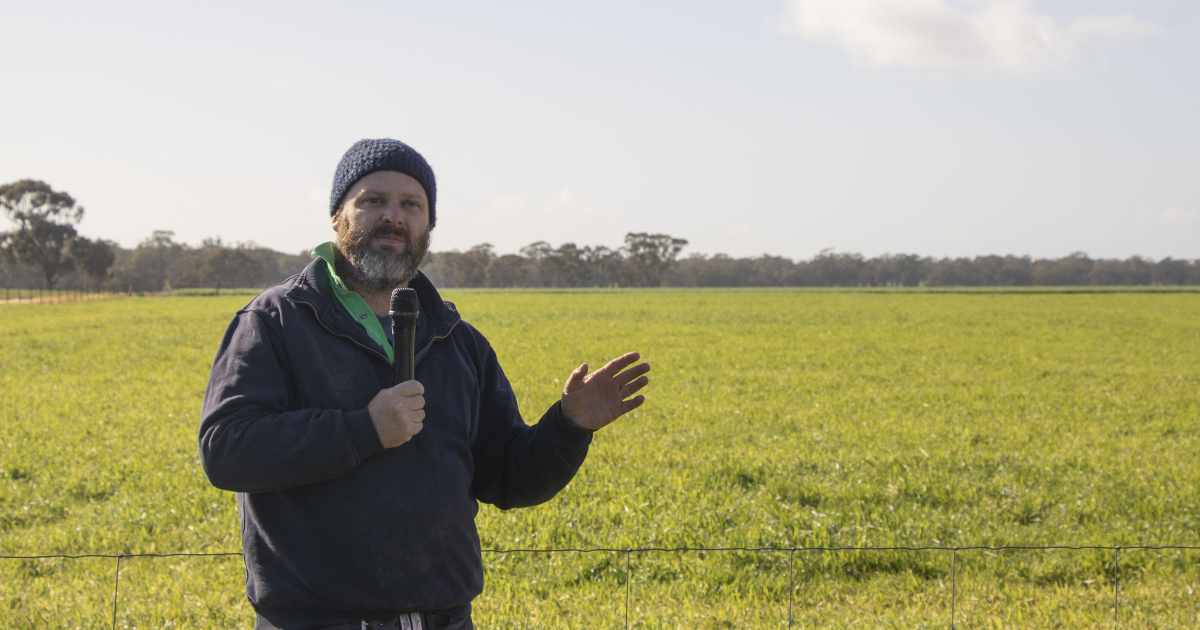 Horsham producer Sam Eagle uses every opportunity to maximise the synergies within a mixed farming operation.

“The containment areas allow us to bring in feed from outside if necessary and feed out screenings from our own grain, being confident that any weed seeds that come with that feed won’t be spread around the farm,” says Sam. “It is easy to manage any weeds that germinate in such a defined and small area of the farm.

“When we buy in sheep we shear them as soon as they arrive to remove any risk of them introducing weeds like Bathurst burr,” he says. “We use the containment areas to avoid overgrazing pastures so the sheep eat the weeds like barley grass as well as the more palatable species. They also provide an effective double knock effect for weeds that have herbicide resistance.” 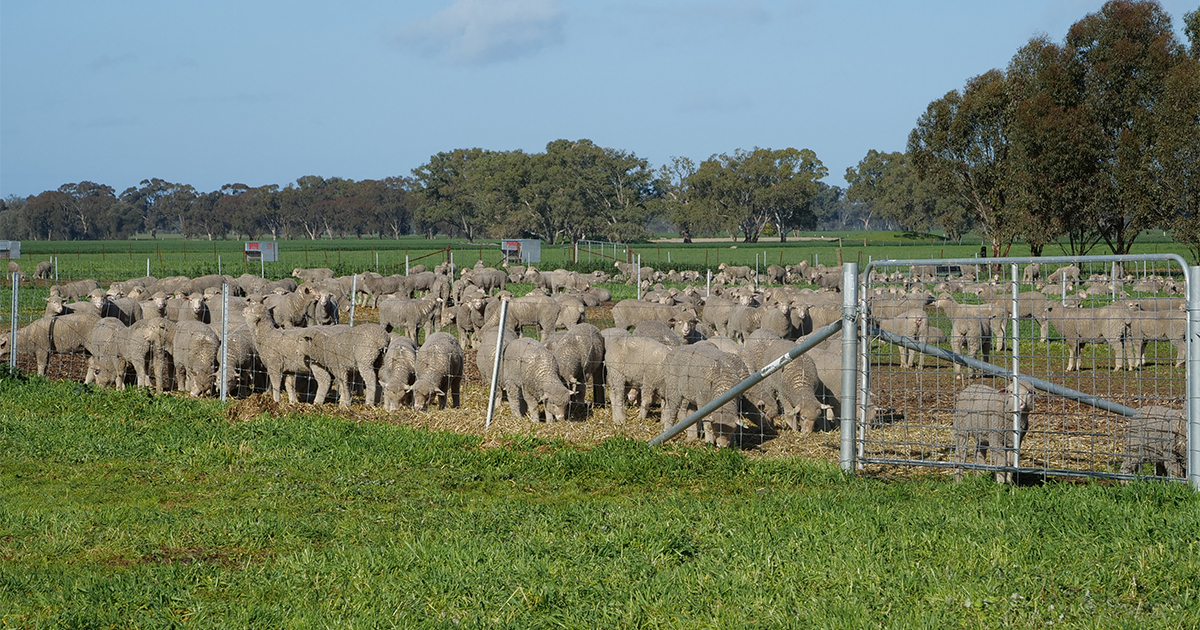 “Silage is a very good weed control tactic,” he says. “You cut it early, so you are stopping weed seed set, and after three days of good weather you can spray out the paddock for a spray fallow.”

The Eagles prefer to either graze a crop fully or grow it for grain, having found that the ‘grain and graze’ tactic for dual purpose crops had an unacceptable yield penalty and opened up the canopy to allow weeds to grow through and compete in the grain phase. 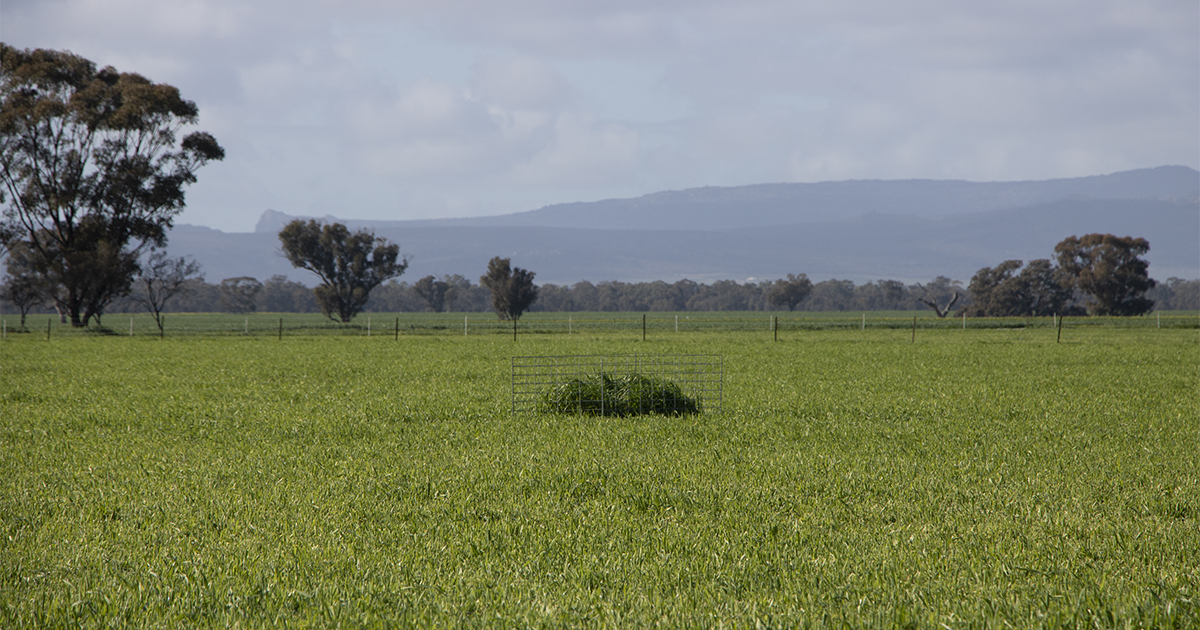 Grazing cover crops and failed grain crops generates cash flow and helps manage weeds. Sam keeps an ungrazed reference area in dual purpose crops so he can remove grazing pressure at the right time if he wants to let the crop go through to grain.

They have found Moby barley plus clover to be the best cover crop to graze and then spray out. Oats and pasture are both cut either for hay or silage to conserve fodder and remove weed seeds.

“In the cropping paddocks sheep will eat most of the weeds that evolve herbicide resistance, like wild radish, annual ryegrass, fleabane and whip thistle. They also generate cash flow from cover crops and from grain crops that don’t go through to harvest due to drought, flood, weeds or frost,” says Sam. “Over summer the sheep reduce our herbicide costs and reduce the stubble load, which makes sowing easier. Once the feed supply runs out, we put the sheep into containment until they start to lamb. This allows the pastures and crops to get ahead and gives us good feed to put the ewes into for lambing.”

“The sheep can make inter-row sowing more difficult in our CTF system so we have to be careful to cut the stubble 300 mm or less above ground level so the stalks don’t lodge across the inter-row as the sheep graze the stubbles,” he says.

Having used narrow windrow burning as their harvest weed seed control tactic for six years, Sam and Emily used a contract harvester with an impact mill for their harvester for the 2018 season. They were pleased with the job the mill did and are looking to purchase one of their own once the technology matures a little more. They use crop-topping in pulses and windrowing in canola to stop weed seed set and also spray herbicide under the cutter bar in canola.

“We test weeds for herbicide resistance so we know what still works and plan out a diverse herbicide program with multiple chemical groups used in a broad crop rotation,” says Sam.

Other than the grazing and weed management benefits, Sam and Emily have also found numerous productivity benefits for their 2500-strong merino flock. Using the containment yards for joining has seen increased conception rates and after preg-testing their ewes, Sam and Emily make separate mobs for the twins and singles so they can better manage the ewe’s nutrition while in containment. Once the lambs are weaned and are brought into containment their growth and feed utilisation rates are higher than when paddock grazed, meaning the returns on feed inputs are higher and the Eagles are able to either turn off hoggets earlier or at a higher weight.

Size and design – they can be any size, provided an allowance is made for 2 to 5 m2 per sheep (2000 to 5000 sheep per ha). At the right stocking density the containment yards compact well and do not generate dust or strong odour. Place the food and water sources as far away from each other as possible in each containment yard – this helps keep the water troughs clean.

Water – sheep require 6 litres of water each per day and more in very hot weather. Flow is more important than pressure, so use thicker pipe (e.g. 30 to 50 mm) to supply the troughs.

Feeders – feed can be placed in self-feeders, feed troughs or on the ground. 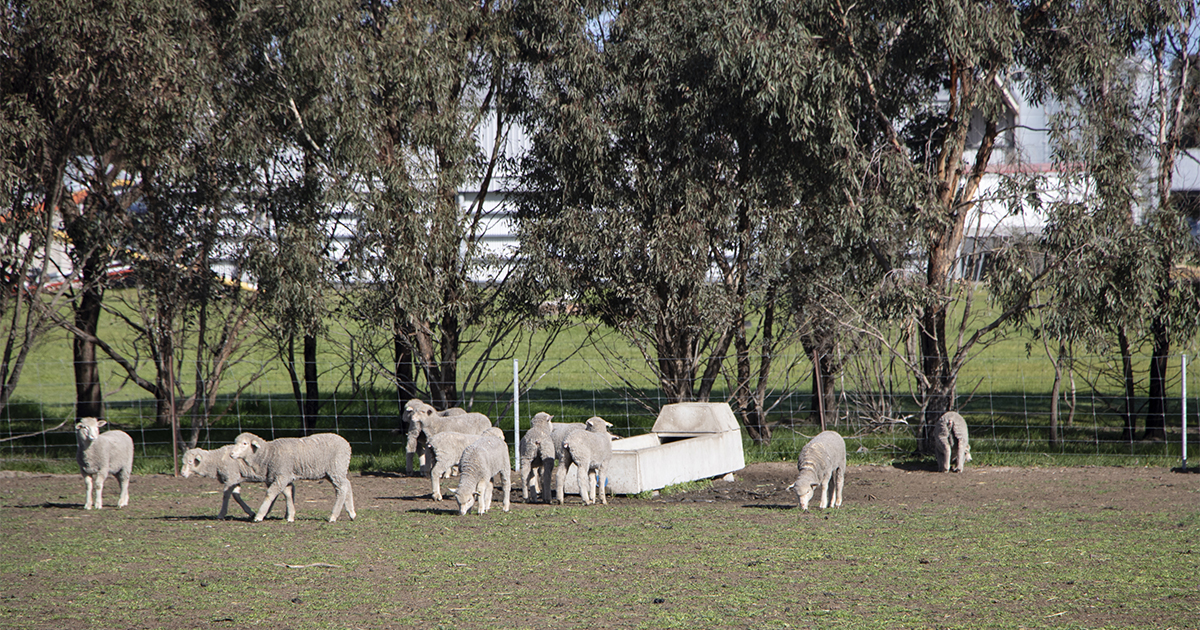 Place the water and feed sources at opposite ends of each containment yard to keep the water clean for longer, and provide as much shade as possible.

Shade – think about shade when designing the containment areas and look for ways to provide as much shade as possible. Protect any established trees.

Feedstuffs – utilise a variety of feeds such as screenings, canola, hay, purchased grain and silage. Match the nutrient value of the feed with the class of animal you are feeding and supply any necessary mineral supplements. Get advice if you don’t have a good knowledge of animal nutrition.

Stock health – give sheep 6-in-1 vaccines and drench before putting a mob into containment.