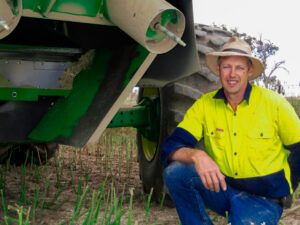 How to go from total crop failure to overcoming weed resistance!

A growing problem with herbicide-resistant ryegrass, which culminated in the total failure of a lupin crop 10 years ago, forced Murray and Emma Scholz to tackle the problem head on.

Today, after implementing a range of measures, the couple has reduced the threat to their profitability and sustainability and have their weeds firmly under control.

Mr Scholz said getting on top of herbicide resistance was an ongoing battle and meant taking daily steps to reduce the impact.

“You have got to be constantly planning two or three years out what you are going to do and you need to have strategies. It is not as simple as selecting herbicides, where you can just drive to town and buy a solution,” Mr Scholz said.

The Scholzs grow wheat, canola, lupins and some barley on 1670ha mostly red soils with 600mm annual rainfall at Culcairn, NSW, along with beef cattle on their non-arable country.

As a result of tackling resistant weeds, Mr Scholz has been chosen as a WeedSmart Champion. WeedSmart is an industry-led initiative managed by the Australian Herbicide Resistance Initiative (AHRI) aimed at enhancing on-farm practices and promoting the long term sustainability of herbicide use in Australian agriculture.

The results for Mr Scholz speak for themselves. He has completely eradicated herbicide-resistant weeds in the paddock that suffered a total crop failure 10 years ago, simply by not allowing seed set for two years in a row.

“It means taking a paddock out of production for two years, and that’s very expensive,” he said. “But we did that 10 years ago on that paddock and it is still free of ryegrass.”

Across the rest of his farm he has adopted other less drastic measures to keep the problem at bay, including wide scale windrow burning.

By fitting a low-cost chute on the back of his harvester he concentrates all of the straw and chaff into narrow rows, about 18 inches wide and 12 inches high, for slow burning.

“We are aiming to get those high 400C to 500C temperatures that you get when a windrow burns for about 10 seconds making any seeds in that row unviable.

“We are not getting every seed but even if we remove 80 or 90 per cent these are populations of plants that I do not need to hit with herbicide, so it is a very cost-effective method.”

Mr Scholz also cuts silage and said he was happy to go into a paddock and cut the ryegrass patches to get either silage or hay from it.

“That has been a very good technique when you have only got a small area in a paddock. It stops the harvester picking up those ryegrass seeds and spreading them across the paddock.”

In addition, he does “brown manuring”, a process involving planting a crop of lupins without any inputs and then in the spring spraying it out with glyphosate before a double knock with paraquat.

“We let that rot down. It’s a great way of taking weeds out in the spring time and it has the added bonus that although there is no income that year, you get a lot of nitrogen which means a fertiliser bonus in the following year.”

Crop competition through high sowing rates and strategic fertiliser application, where he places urea beneath the plant at sowing to make sure the crop gets the boost and not the weeds, further add to his armoury of weed management tactics.

Mr Scholz also does variable rate pH mapping to ensure the right application of lime is spread across the whole paddock, often finding some areas only need half a tonne of lime while other areas need two or three tonnes.

“By putting that three tonne of lime in the soil it lifts the crop’s ability to compete as ryegrass appears to be a lot more tolerant of acid soils than wheat is,” he said.

Mr Scholz said herbicides were a wonderful resource that had been undervalued through an assumption that there would “always be a new one around the corner”.

“We have to farm as if there will never be another new herbicide.”

While each strategy had its own cost, either in additional time, labour or spending, it was vital to constantly keep chipping away at the problem, he said.

“Where we fell down the first time was that we knew there was a problem, we knew it was building and we just kept hoping it would go away.”

He said the WeedSmart initiative was a wonderful idea because it helped keep farmers motivated and focussed in their fight against weeds.