‘2 + 2 and No Survivors’ to protect RR technology

At the junction of the Comet and Nogoa Rivers, 40 km east of Emerald in central Queensland, Neek and Robyn Morawitz grow a range of irrigated and dryland crops.

One third of the 990 ha irrigated area is under four centre pivots and the rest is flood irrigated from their on-farm storages and the Emerald Irrigation Scheme. An additional 350 ha is operated as a minimum tillage dryland system. 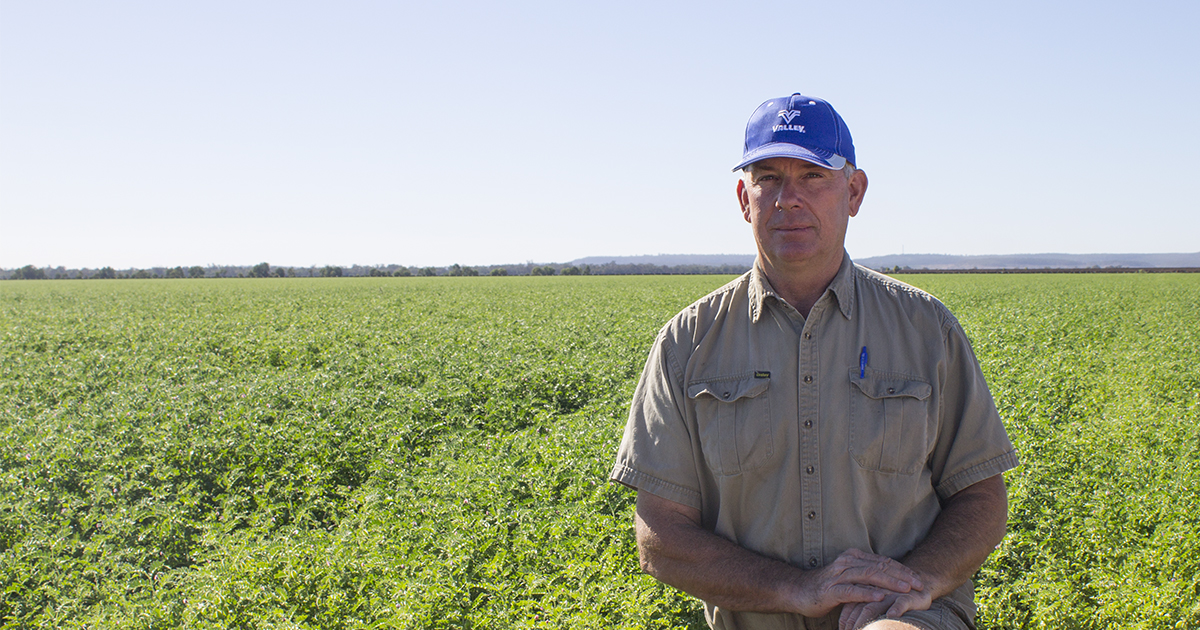 Neek Morawitz grows a range of irrigated and dryland crops adjacent to the Comet River in Central Queensland. His herbicide and crop program aims to keep weed numbers low to minimise the risk of herbicide resistance.

Roundup Ready Flex cotton with Bollgard 3 technology for helicoverpa control is central to the Morawitz’ business. As such Neek is keenly aware of the importance of keeping ahead of herbicide resistance.

“To reduce the risk of glyphosate resistance we implement as many other weed control strategies as we can across the crop rotation,” he says. “In the fallow after an irrigated cotton crop we normally don’t use glyphosate at all, choosing to use paraquat, diquat and synthetic auxins such as 2,4-D early in the summer and then we also cultivate a few times to kill weeds, incorporate stubble and prepare the land for the next crop.”

“Occasionally we will do a double knock mid-season in the fallow using synthetic auxin followed by paraquat, or glyphosate followed by paraquat. Applying MCPA in wheat crops is another opportunity to use synthetic auxins, however we restrict our use of these herbicides because of the risk of contamination of spray equipment and the potential for crop damage, particularly in cotton.”

“We aim to implement the ‘2 + 2 and no survivors’ strategy of two non-glyphosate controls in-crop and two non-glyphosate controls in the fallow to extend the life of the Roundup Ready technology,” he says. “In-crop we are using inter-row cultivation, crop competition plus pre-emergent herbicide and in the fallow we use cultivation and alternative knock-downs such as paraquat and synthetic auxins.”

Cotton, sorghum and maize are grown on beds that are 960 mm apart, while wheat and chickpea crops are planted in four rows, 375 mm apart, across 2 m CTF beds. Neek pays close attention to achieving an even plant stand through precise seed placement and even germination. He says the use of GPS technology at planting has made a real difference to the competitiveness of crops by avoiding misses and overlaps.

PBA Pistol, PBA Kyabra, PBA HatTrick and PBA Seamer chickpeas have all performed well in rotation with cotton, generally only requiring a pre-water and then one irrigation early in the flowering phase.

“By using cultivation and strategic application of residuals along with sowing clean seed from our own farm we are getting a good even stand and very few weeds growing in our chickpea crops,” he says.

One of the centre pivot blocks has quite sandy soil that is prone to wind erosion. While soil loss is a real concern, so is the sand-blasting damage done to cotton seedlings on windy days.

“We use cover crops such as wheat to protect the soil surface and the young cotton crop,” says Neek. “In fact the only wheat we have planted this winter is the cover crop on this block. Last summer we grew peanuts and baled the peanut crop residue after harvesting then planted the wheat cover crop, using a spinner, to provide surface cover for the next cotton crop.”

This wheat cover crop was planted with a seed spreader to protect the sandy soil surface and conserve moisture prior to planting cotton.

The cover crop was sown in mid-June after a glyphosate / paraquat double knock. In mid-September Neek brown manured the wheat with another double knock and left the crop in-situ until the cotton crop was direct drilled in late September. In addition to physical protection of the cotton seedlings Neek has seen other benefits to cover cropping, including better crop establishment and more even water distribution through the soil.

Much of Neek’s crop rotation centres on planning around plant-back periods for residual herbicides. On the irrigated portion of the property he chooses a mix of cotton, sorghum, maize, mungbean and soybean in summer. Neek doesn’t usually sow a summer crop on their dryland area, however, when the opportunity has arisen he has had success with dryland cotton, sorghum and mungbean.

Since the introduction of Bollgard 3 cotton Neek has been taking advantage of the opportunity to plant as soon as the window opens on 1 August, particularly on the irrigated blocks. This means the crop can be harvested by late January, making both the dryland and irrigated crops more moisture efficient. The early plant also means land is free for double cropping into mungbean or sorghum if the opportunity arises.

In winter, the whole farm is sown to either chickpea or wheat, if sufficient water is available. This simple rotation in winter maximises the effective use of cereal stubble for soil moisture conservation. Neek generally expects to produce three crops within a two-year timeframe, which allows for some double cropping and some fallow breaks.

If necessary, Neek has the option to use irrigation to activate pre-emergent herbicide and help manage herbicide breakdown in periods of extended dry weather.

“Our herbicide choices are based on balancing the expected impact on weeds and the crop safety of the following crop,” he says. “Our mix of crops allows us to be using a wider range of herbicides in both summer and winter.”

“We grow some sensitive crops and so it is very important that the herbicides we apply hit their target and any drift is kept to an absolute minimum,” says Neek. “We don’t skimp on water rates and choose spray nozzles best suited to the herbicide and the conditions at spraying.”

To date, Neek has not identified any herbicide resistant weeds on the property however he has participated in a Department of Agriculture and Fisheries weed survey and is interested in seeing the results when they are released.

“Feathertop Rhodes grass is our main concern here and it has the well-known tendency to establish on crop borders and non-crop areas around the farm,” he says. “To prevent movement of FTR into the cropped areas we are diligent with both herbicide and non-herbicide control methods, including using a flame-thrower to kill larger plants along irrigation channels and the like. With herbicide treatments we try to mix that up as much as possible, changing between glyphosate, paraquat, diuron and metsulfuron.”

In non-crop areas such as around irrigation channels Neek has found that a flame-thrower is a good way to kill established FTR plants and prevent seed set.