Managing weeds across the rotation

Aiming for 130 per cent utilisation of their cropping land through the year, Peter and Kylie Bach have developed a farming system that extracts full value from barley stubble and minimises weed pressure.

Their 1000 ha farming operation, Kurilda Ag, is based near Pittsworth on the Darling Downs in Queensland, an area known for its reliable rainfall and deep self-mulching black clay soils. Peter says the recent long string of dry years has clearly demonstrated the value of stubble cover in their zero till, controlled traffic system.

“We are using crops to compete with weeds for as much of the year as possible,” he says. “We double crop whenever there is sufficient soil moisture to plant and having only short fallow periods most years reduces the opportunity for weeds to take hold.”

Peter and Kylie have been farming for 15 years, with a focus on summer crops, mainly sorghum and mungbean. Barley is grown in winter, predominantly for stubble cover to conserve moisture.

About five years ago they bought a Shelbourne stripper header and an Emar chaff deck for their harvester to achieve the dual purpose of conserving standing stubble and implementing harvest weed seed control. Their weed management program includes most of the WeedSmart Big 6 tactics that minimise the impact of weeds on their business. 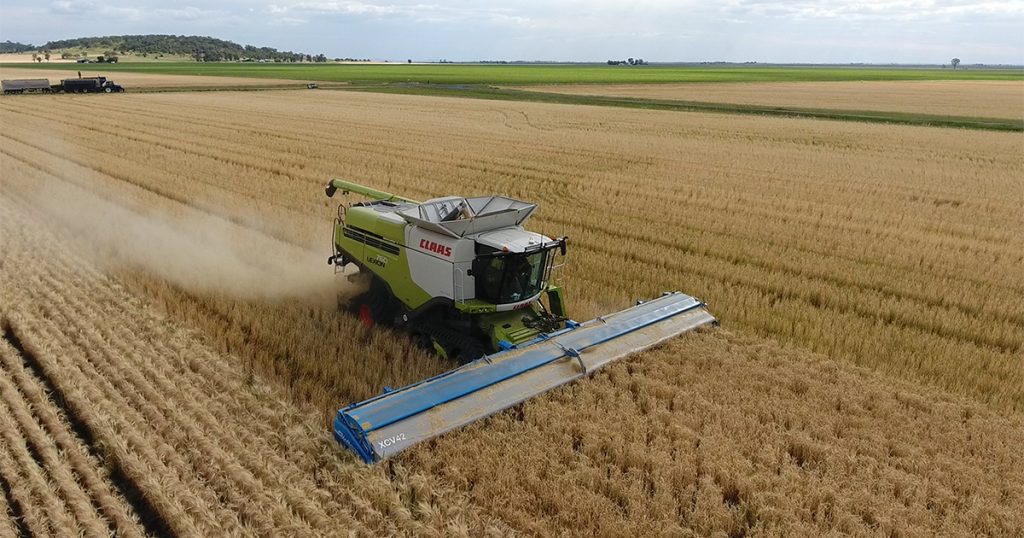 “Our main aim at the time was to deal with a large population of Johnson grass on a farm we had recently bought,”says Peter. “Although it is relatively easy to control Johnson grass with herbicide, we wanted to try a non-herbicide method to reduce the weed seed bank as quickly as possible.”

Across the farm, Johnson grass is now under control and feathertop Rhodes (FTR) grass, sowthistle and fleabane are the main problem weeds.

“Generally, when we keep on top of feathertop Rhodes that also manages the fleabane,” says Peter. “Sowthistle is getting harder to kill and we suspect glyphosate resistance is increasing. We also know of a few small areas of resistant ryegrass.”

The transition from barley to mungbeans, or barley to sorghum, provides the opportunity to use a different suite of chemicals. The Baches generally stay away from Roundup Ready (RR) crops and are using more soil residual herbicide in their program than they did previously.

Peter says there are more options available now, particularly with soil residual chemistry, to enable increased chemical diversity with the crops they grow.

“The residuals are chosen specifically with the next crop in mind,” he says. “With inconsistent rainfall patterns it can increase the risk of crop injury if there is insufficient rainfall to break down the chemical before the next planting.”

Metolachlor (Group 15 [K]), such as Dual Gold, plus glyphosate (Group 9 [M]) is applied at the end of July or early August in preparation for grain sorghum. After the sorghum crop is harvested, Peter prepares to plant barley. After the barley crop he then applies a residual herbicide like imazethapyr (Group 2 [B]), such as Spinnaker, ahead of mungbean crop emergence.

They have an optical boom sprayer but are finding it gets less use these days with less area being fallow managed.

Peter says that crop competition through frequent cropping maintains pressure on weed numbers, but to sustain this intensive cropping program they need to maximise the soil moisture levels throughout the year with ground cover and standing stubble. 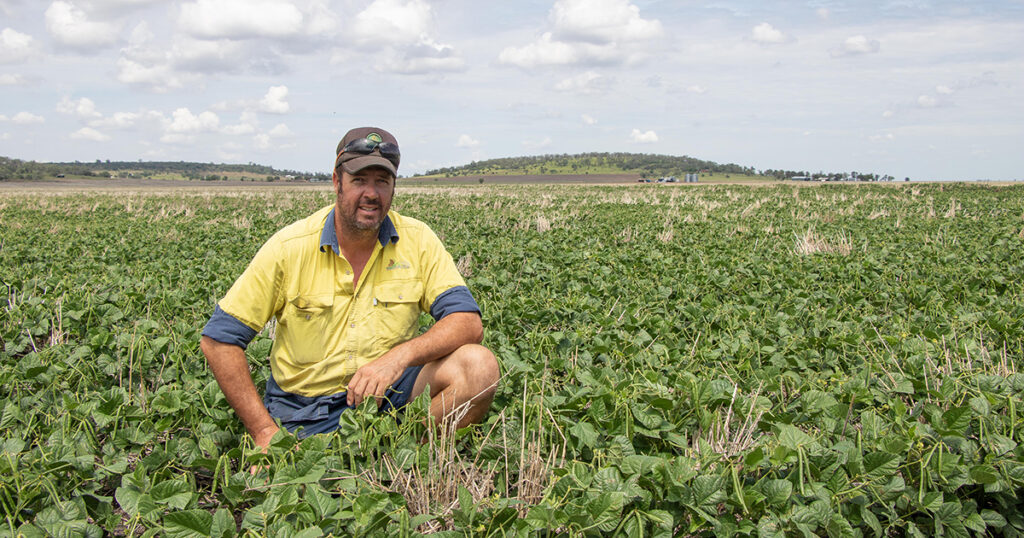 Peter Bach says the ability to keep growing crops throughout the year keeps the pressure on weeds.

“Retaining stubble has been our standard practice for years but the lack of stubble produced by mungbeans was a weak link in the system,” he says. “We were interested in the stripper front for use in barley, and a grower in the Riverina gave us the confidence to give it a go.”

The mungbean crop benefits from the tall barley stubble and responds with higher yield. After the mungbean crop is harvested, the barley stubble tends to lay over, giving excellent ground cover that also benefits the following crop. The stripper front essentially maximises the benefit of the barley crop for the whole rotation, and has counteracted the effect of drier seasons.

“Soon after we bought the stripper front and chaff deck the rain stopped and a long series of dry years set in,” says Peter. “The tall stubble from that first barley harvest made it possible for us to keep growing crops for at least two years on very minimal rainfall. Since then it has helped make the most of every rainfall event and is a key part of our farming system.” 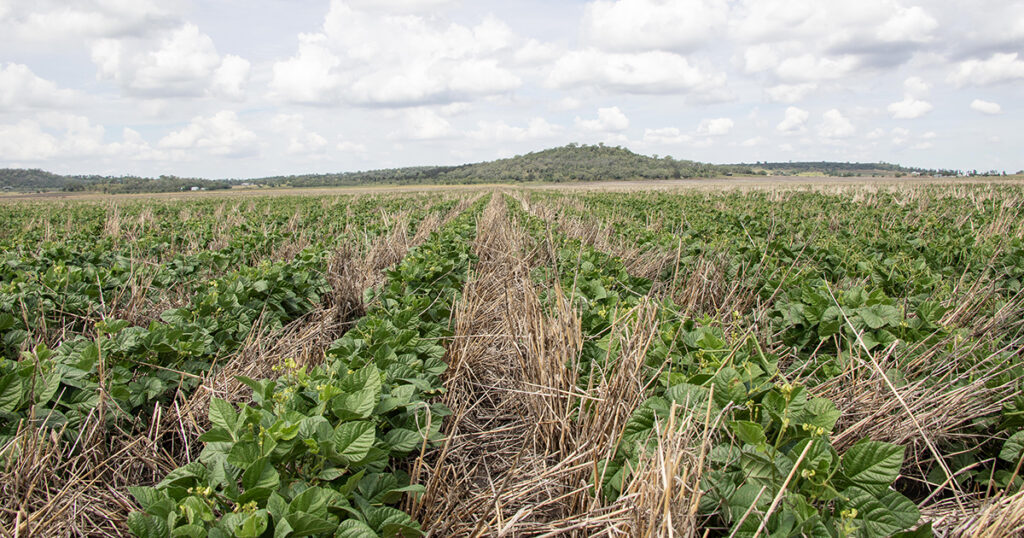 The standing barley stubble benefits the following mungbean crop and continues to provide good ground cover after the mungbeans are harvested.

They currently use XL spearpoints on CR600 units on their tyne planter, which does an excellent job planting barley on 38 cm (15 inch) row spacing, but the Baches plan to reduce the row spacing in barley to 25 cm (10 inch) and will most likely change from the tynes to a disc system.

An NDF disc opener planter is used for summer crops, which are planted on 76 cm (30 inch) rows. All crops are sown using moisture seeking techniques, which Peter says is more important than precision planting when it comes to achieving even crop establishment.

“Although we have had a few failures with deep planting, it has generally been a good strategy for us,” he says. “The key is to plant deep but not put too much soil back over the seed. In drier years we also reduce the seeding rate to ensure even germination. Early summer planting dates seem to be the best-bet option for our district.”

In the lead-up to harvest both mungbean and sorghum crops are desiccated but this operation is too late to stop seed set on late germinated weeds. To prevent weed seed set in these in-crop escapes Peter is working on system that can be used to spray weeds in the inter-row just before the sorghum starts to flower.

At harvest the Emar chaff deck is used in all crops, every year. In the last five years this harvest weed seed control tool has had a massive impact by reining in large populations of Johnston grass.

“The chaff deck applied consistent downward pressure on the Johnson grass seed bank every year and also helps us manage feathertop Rhodes grass,” says Peter. “Of course, the benefit is most noticeable when populations start high, but it is also good to know that it is also effective in keeping numbers low across the farm.”

He has also noticed that the chaff deck is very effective in controlling volunteer crop plants. Having all the weed seed and any grain that was thrown out the back of the harvester placed on the wheeltracks makes control much easier and more effective.

“When we do fallow sprays, we run larger nozzles over the wheeltracks to make sure any weeds that germinate are controlled before they can set seed,” he says. “In some instances, the only weeds present in-crop are along the wheeltracks so we can just turn on the six nozzles running over the three sets of wheeltracks.”

The combination of the stripper front and the chaff deck has resulted in more crop and less weeds at ‘Kurilda’, even through a series of very dry years.

Peter and Kylie Bach are using crops to compete with weeds throughout the year, aiming for 130% utilisation of their cropping land....